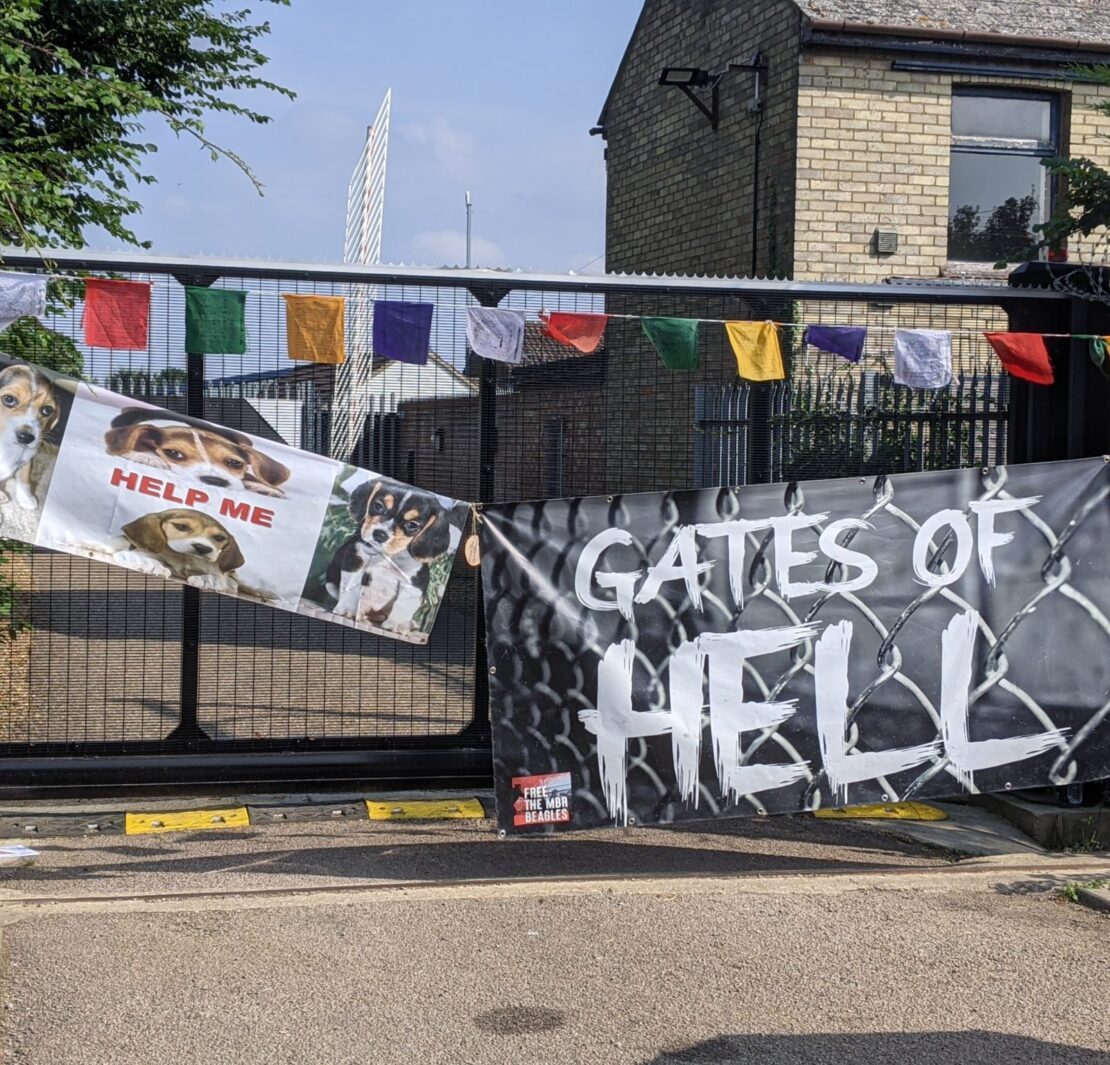 What is Camp Beagle?

They call it Camp Beagle and it’s situated in rural England. That may sound like a fun summer romp, but the billowing sign reading Gates of Hell indicates otherwise. Camp Beagle is actually a grueling protest action by Brits who are outraged that puppies are being bred in their homeland for the express purpose of transferring them to places where they are subjected to horrifically painful, cruel experiments.  The roadside protest camp has been in existence for more than 80 days and it’s making local and national headlines.  It has also inspired other events across the UK and in France. Sometimes several hundred protesters attend the camp. The BBC reports that as of September 2021 at least 15 protesters had been arrested.

MBR Acres is a facility that breeds beagles for the animal testing industry. It is owned by US company Marshall BioResources.  MBR Acres sends these animals to laboratories across the UK. The labs carry out experiments on animals for a number of sectors.

The camp started with three or four animal lovers protesting at the site once a month. After a long day of activism, one woman simply sat down and said she could not leave the site. Heartbroken and overwhelmed, she declared that she could not – in good conscience – walk away, knowing she was leaving behind animals destined to suffer and ultimately die. First, one friend agreed to stay and keep her company. Gradually, other animal activists joined. Soon, tents were pitched at the side of the main road outside the company. Next, portaloos and a shower were installed. So you see, it grew naturally. I personally have never seen anything like Camp Beagle in relation to animal rights issues.

The Aim Is Simple: Shut It Down!

The goal is to shut this facility down and, by extension, put an end to animal experimentation. The campaign has generated celebrity support from the likes of Ricky Gervais and Downton Abbey actor Peter Egan, who uses his popular Twitter account to urge fellow Brits to sign an anti-vivisection petition that would amend the Animal Welfare Act to include laboratory animals. Egen is quoted in the Mirror as lamenting, “The machine-like conveyor belt delivers man’s best friend into a toxicity testing laboratory… Inside the lab, dogs endure experiments that can involve being force-fed chemicals for up to 90 days.”

While Britain is no longer part of the European Union, there are still obvious cultural connections. And, the EU seems determined to end what many increasingly believe is an outdated practice in an age of modern technology and microbiology. Even as Camp Beagle grew into a village of its own this summer, the EU Parliament was voting to create an action plan to phase out animal experimentation in all 27 of its member nations.

Camp Beagle and MBR Acres are based in rural Cambridgeshire in the UK. However, MBR is owned by an American company. There are reportedly only two such breeding farms in England. The other one is a site in Hull in the UK. That is also reportedly owned by Marshall BioResources.

What Does MBR Acres say?

In response to Camp Beagle, MBR Acres issued this statement to the BBC: “We should stress that we have no interest in stifling legitimate protest provided it is conducted lawfully and peacefully, but we absolutely are concerned to stop those protesters who were conducting a vicious and unwarranted harassment and intimidation of our staff and others.” To that one animal activist replied, “What’s really vicious is purposely breeding innocent animals knowing they will be tortured, often to death.”

MBR Acres insists: “MBR is a specialist breeder of animals that are raised to be healthy, content and comfortable in a lab environment. It does not undertake regulatory toxicology or other experiments and has only animal care staff working on its sites.” Critics respond that by noting the animals are transferred to other facilities, whereupon they are subjected to painful and often deadly experiments.

MBR Acres States: “Expert opinion on why animals are needed in research should be sought from the medicines regulator and scientists or organizations working in this field.

“These experiments form a small but crucial part of a wide range of applications from ecology work to investigations into human and animal diseases including those that led directly to the vaccines and treatments for Covid-19, cancer drugs, pet medicines, and products labeled as safe for pets… We are proud of the role we play in supporting human and animal health regardless of the misconceptions of campaigners.”

The Argument Against Animal Experimentation!

Justin Goodman, Vice President of Advocacy and Public Policy at the anti-vivisection nonprofit White Coat Waste Project responds to the argument that animal experimentation is necessary by saying,

“90% of drugs that pass animal tests, that work on animals, fail when they go into humans. They don’t work. They are either ineffective or they are dangerous.”

“There are other ways to do science that take us where we need to go faster and more efficiently. An example of that is ‘organs on a chip’. Fully functional miniature human organs built from ethically sourced cells and tissues. They can model diseases and test drugs. When they compared the results of these organs on a chip to results with other animals, these little organs on a chip are more effective at predicting what happens to people than animal testing.”

As for the COVID argument, journalist and JaneUnChained founder Jane Velez-Mitchell argues, “If you think COVID-19 first cropped up in a wet slaughter market, that’s animal abuse. If you think it started in the Wuhan lab, where they were experimenting on bats, that’s also animal abuse. Either of the two leading theories points to the same conclusion.  This is a zoonotic illness that jumped from animals to humans because of our toxic and abusive relationship with animals. To then argue that torturing still more animals is the solution is the height of human arrogance and myopia.”

Despite the existence of modern alternatives to animal testing, UK law still requires all new medicines to be tested on two live mammals, one of whom must be a large non-rodent. This is before a potential new drug is tried on humans. The ultimate aim of protesters is to change that law and toss animal testing into the garbage dump of history. Hence, Camp Beagle.

The UK government has a petition website. On this site, any resident is able to start a petition on issues close to their hearts. If that petition attracts 100,000 signatures it is debated in Parliament.

The petition “Ban Animal Testing – Fund, accept and promote alternatives to animal testing” is to be debated on October 18.

Along with the camp, there have also been outreach events to raise awareness across the UK. The issue of animal experimentation has been brought to the doors of power as protests have been held outside the Home Office. A London demonstration is highlighted in the UK media here.

JaneUnchained has more articles on protests and animal rights.