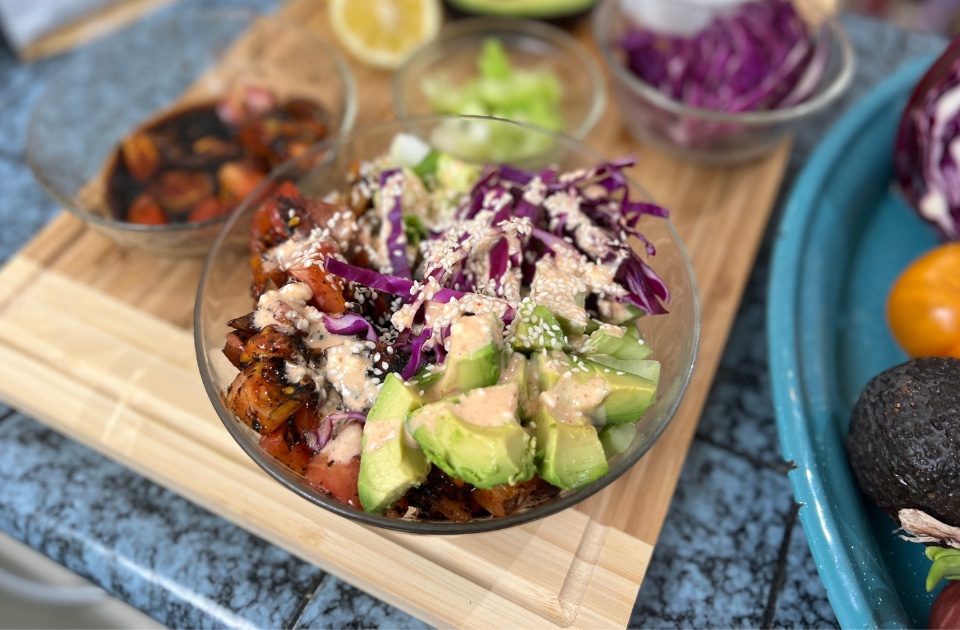 When you think of a Poke Bowl, one generally thinks of fish…right?  Well, now you can have a vegan Poke Bowl made with tomatoes that have the taste and texture of the sea!  Sherri Johnson and Paige Parsons Roache, of Plant-Based in the Burbs, show us how to make this deliciously flavorful dish, in no time at all! 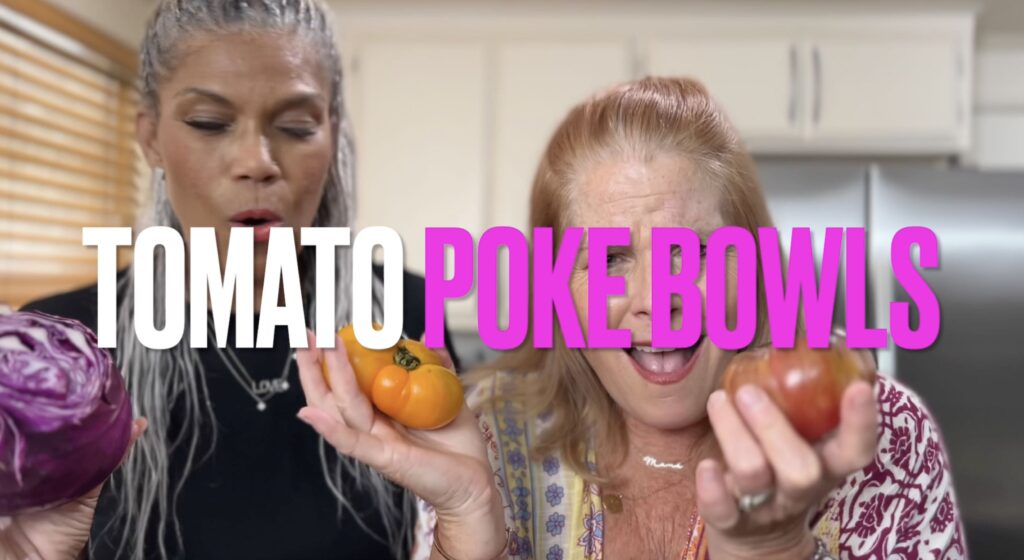 Plant-Based In The Burbs Hosts and Chefs

Sherri Johnson is an entrepreneur, personal trainer, mother, wife, and lifelong lover of cooking. As a child, she watched her grandmother make magic in the kitchen, which solidified a loving and personal connection to food. Eventually, Sherri discovered a passion for healthy living and veganism. She learned that plant-based eating was not only conducive to a healthy mind and body, but also a compassionate approach to healing the planet and caring for its animals. Through Plant-Based in the Burbs on UnchainedTV, Sherri shares her techniques for creating “veganized” versions of your favorite meals. With her friendly approach and infectious charm, she demonstrates that veganism is not only healthy but easily accessible to everyone. Through this platform, Sherri hopes to encourage others to explore the lifestyle that has completely changed her for the better. Sherri is deeply passionate about helping others step into the highest version of themselves. By sharing her expertise as a personal trainer and advocate for veganism, she helps clients and viewers create the body and lifestyle of their dreams. In addition to physical fitness and delicious food, Sheri plans on launching an activewear brand called W29 that promises to serve as a force to uplift and inspire women.

Celebrating being vegan for 7 years, Paige Parsons Roache has been committed to bringing ECO-VEGANISM to the forefront of every interaction: Environmentally conscious vegan living. After watching the documentary COWSPIRACY, she went vegan on the spot. Her daughter Katelyn, 13 at the time, chose veganism for the animals 6 months earlier. Paige, on the other hand, after being shocked by the environmental impact of eating meat and dairy, chose to go vegan “for the environment.” Soon after, she attended her first pig vigil with LA Animal Save/Animal Save Movement. Once she looked those baby pigs in the eyes, she knew why her daughter had gone vegan.  Cooking as a guest chef on LunchBreakLIVE after meeting Jane Velez-Mitchell at VegFestLA, and inspired by Jane’s bold courage, Paige became a Contributor for UnChainedTV. Reporting on all the latest animal rights news.  She also became the Senior Booker for UnChainedTV. Now, the Communications Director of UnchainedTV’s streaming network, and co-producer/co-host of the Plant-Based In the ‘Burbs show, Paige brings inspiration, humor, and humbleness to the kitchen, showing simple swap-outs and easy recipes to inspire people to bring more plants on their plates.

How Can a Vegan Poke Bowl Resemble Fish?

The secret to making this Poke Bowl taste like the sea, without fish, is seaweed!  You blend up some seaweed, add soy sauce, and let your tomatoes marinate in the mixture for a bit.  The result is a fishy flavor and texture far healthier for you and better for the oceans and the planet.  Throw on some colorful chopped veggies atop a bed of rice and you have a beautiful, impressive, healthy meal.  And, as you can see from the video, you can have a lot of fun making this meal! 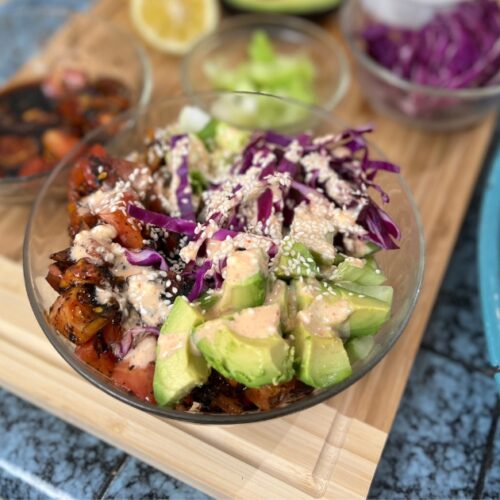 Note: This recipe is inspired by the fabulous Chef Charity Morgan’s recipe in her amazing cookbook “Unbelievably Vegan”!
Keyword vegan
Tried this recipe?Let us know how it was!

Thanks For Watching This Episode of Plant-Based In The Burbs!

Now you can make a vegan Poke Bowl at home, impress your friends and family, and have all that ocean flavor you crave, without harming the fish or the environment!  Give this recipe a try and let us know how much you loved it.  Take a photo of your finished dish and tag @UnChainedTV and @PlantBasedInTheBurbs on Instagram.  Looking for other simple plant-based recipes to try?  Hop on over to the recipes page, where we have a ton to choose from.  Until next time…keep cookin’!