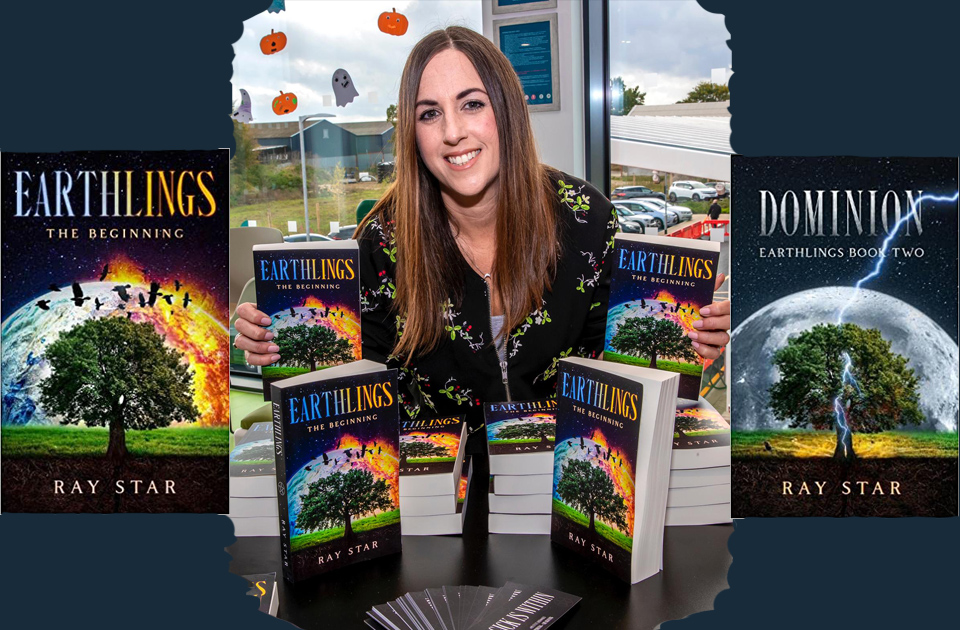 Ray Star, the author of Earthlings and Dominion, is writing the third part of a vegan trilogy that could become the next Harry Potter

London, England – Ray Star is a multi-award-winning British author. Her debut fantasy novels, Earthlings and Dominion have gone on to become Amazon best-sellers, and now she is writing the third of this vegan trilogy that could become a vegan version of Harry Potter.

The Earthlings trilogy is the tale of a magick-born girl named Peridot, living in a dystopian world where animals rule and humans are enslaved, and she is destined to either save or destroy them. Not magic from fables but real magick from the old days, the control of the elements and spirit. Cheerfully describing herself as an “eclectic witch” mother of two, Star says she understands the power of “magick” and hopes to one day open the Peridot Animal Sanctuary and Nature Reserve in England.

In the first book, Earthlings (The Beginning), Peridot discovers a world where humanity is enslaved, a cruel dictator rules the land, and an uprising is on the horizon. In the second book, Dominion (Earthlings book Two) we see that Peridot has fallen captive, and, alone, she must learn to embrace her magick and bond with the ancient being inside of her to break free from captivity. Star is now writing the third part of this vegan trilogy, Land of Hope and Glory, set for release in 2023, where we will learn if Peridot ends up saving the world.

Inspired by the Classic Documentaries: Earthlings & Dominion! Both are Streaming on UnchainedTV!

Star dedicated the titles of her books to classic vegan documentaries that made her go vegan during Veganuary of 2018. Earthlings is directed by Shaun Monson and narrated by Oscar-winning actor Joaquin Phoenix and Dominion is directed by Chris Delforce. You can watch both films for free on our non-profit streaming network, UnchainedTV, by simply clicking the links. As Veganuary 2023 is celebrated all over the world, UnchainedTV’s Jane Velez-Mitchell interviewed this fascinating woman whose life was changed by this global campaign. You can watch the entire interview here.

After losing her father to cancer and beginning to reduce animal products with him during his convalescence, Ray Star initially became vegan for health reasons. She explains:

“I went vegetarian first, and when you go vegetarian, everything is just smothered in cheese. So, I put quite a lot of weight on, and I felt really uncomfortable with myself. I stumbled across Veganuary and that was just it for me, a game changer. I downloaded Doctor Greger’s Daily Dozen which changed my life in so many ways.”

However, she soon embraced the other dimensions of veganism and became a passionate advocate for animals. She even left her previous job and changed careers. She adds:

“When I found out the animal side of things, I realized my business wasn’t vegan. I had a PR agency for 15 years. It was a really successful business, and it was something that I loved, and I was really proud of. But my clients weren’t vegan. I was promoting products, fast fashion, hair and beauty products, and things that weren’t cruelty-free, and I thought, ‘well, I can’t go vegan in my personal life and then have a job that completely contradicts all my personal beliefs.’”

The idea of writing the vegan trilogy came to her and, as she had the writing skills developed during her PR work, she decided to go for it.

“If you have an idea for something, no matter how crazy it might seem, just go for it. It’s the best thing I ever did. I’d recommend it to anyone.” — Ray Star, vegan author

The Earthlings trilogy idea came from the frustration of being the only vegan among friends and discovering they did not want to hear what she had to say about animal exploitation. Star was determined to find another way:

“You just want to tell everyone all these horrors of the world that you were not previously aware even existed. It wasn’t working. I was becoming that preachy vegan… How can I get them interested in this and get them to want to know what animals go through in the food chain process? That was when I had the idea to write a set of stories.”

The Earthlings trilogy is the story of a girl who is not aware of her magick powers and her ability to either save or destroy her world. Star explains why she chose her:

“I did that because I think we have the ability to save or destroy our world as well. But, the twist in it is that it is a dystopian world. So, it’s our world turned upside down. Rather than humans being at the top of the food chain, it’s the animals.”

The books have lots of magic and epic battles, all for a good reason. Star explains:

“The core actual story is magick-based, because I knew that would be what would draw people in. Everyone loves Harry Potter, Stranger Things, Hunger Games, Shadow and Bone, The Witcher, etc… Then it’s not until you’re already in the story that the message comes through.”

“I didn’t pitch my books as vegan, even though they are. As much as I want vegans to read them, I want non-vegans to read them too, and then hopefully begin their pathway after reading them.” — Ray Star, vegan author