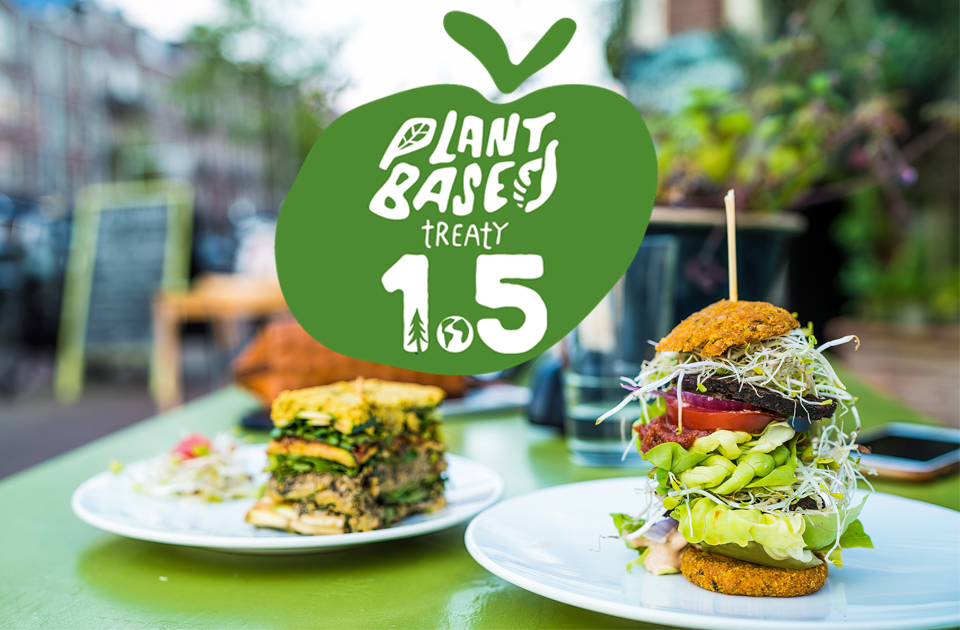 The Plant Based Treaty urges cities and institutions to take real action to address meat’s role in the climate crisis.

Los Angeles, January 16, 2023 — To spur institutions into urgent action, the Canadian-based vegan campaigning group Plant Based Treaty is starting 2023 with a new focus. It is urging institutions all over the world – cities, businesses, nonprofits, universities, hospitals, nursing homes, prisons – to adopt meaningful plant-based measures to tackle the escalating climate crisis.

To help them do that, it has unveiled a new project called PBT 1.5 which lists specific measures they can take with their food choices. By purchasing and promoting products from the animal agriculture industry, one of the leading sources of greenhouse gas emissions, PBT says these institutions are making the problem worse. The solution proposed is clear: move towards plant-based alternatives for all their food-related choices.

The Plant Based Treaty is a campaign created by the vegan organization Animal Save Movement, founded by the Canadian activist Anita Krajnc in 2011. The Treaty aims to halt the widespread destruction of critical ecosystems caused by animal agriculture. It also aims to promote a shift to healthier, sustainable plant-based diets. Additionally, it seeks to actively reverse the damage done to nature, including the wild animals being driven into extinction.

The Plant Based Treaty has three core principles: Relinquish (no land use change, ecosystem degradation or deforestation for animal agriculture), Redirect (an active transition away from animal-based food systems to plant-based systems), and Restore (actively restoring key ecosystems, particularly restoring forests and re-wilding landscapes). So far, the Plant Based Treaty has been endorsed by more than 69,000 individuals, more than 1,000 organizations, 1,000 businesses, and at least 19 cities.

In 2022, the city of Los Angeles,  the second largest city in the United States, endorsed the treaty. Haywards Heath is the first municipality in the UK that has endorsed it.  In India, the cities of Bhuj, Bhujpur, Jabalpur, Nagpur, Amravati, Thane, Vadodara, Ahmedabad, Bhavnagar, Mundra, Jamnagar, Rajkot, Gopalpur, Gandhinagar, and Sonipat have also endorsed it, as has the Turkish city of Didim.

If a city has not signed the Plant Based Treaty, yet, it can still make positive changes. Here are some concrete actions the PBT 1.5 team (in partnership with the Better Food Foundation and VegTO) suggests that any municipality can take:

Here are some examples of municipalities already applying some of these measures:

The councils of Faversham, Hythe, Lewisham, Reading, and Oxfordshire County in the UK have passed motions to serve only vegan food at council events.

Haywards Heath Town Council in the UK took part in Veganuary 2022 and encouraged residents to join them in their newsletter and website.

In Sao Paulo, Brazil, over one million vegan meals are served weekly on Meat-Free Mondays at over 3,500 schools in over 100 cities.

Oakland Unified School District in California reduced its carbon footprint from food purchases by 14% while saving over 42 million gallons of water and $42,000 by reshaping its menu with fewer animal products.

The Canadian University Initiative has been working with seven Canadian university chefs, since 2020, to transition to at least 60% plant-based meals.

The mayor of Kelowna, Canada, organizes a Vegan Awareness Week each year in May.

The Toronto Vegetarian Food Bank has provided over 350,000 eco-friendly and healthy meals to people struggling with food insecurity for over seven years.

Hayek Hospital in Lebanon, the first fully vegan hospital in the world, has eliminated all animal products from its menus to prevent patients from consuming the very foods that may have contributed to their health problems in the first place.

Last, but certainly not least, New York City serves exclusively plant-based foods at its cultural events (heritage events, etc.), and all public hospitals in the city offer plant-based options for each of the three million meals they serve to their patients. It has also introduced Vegan Fridays to all public schools.