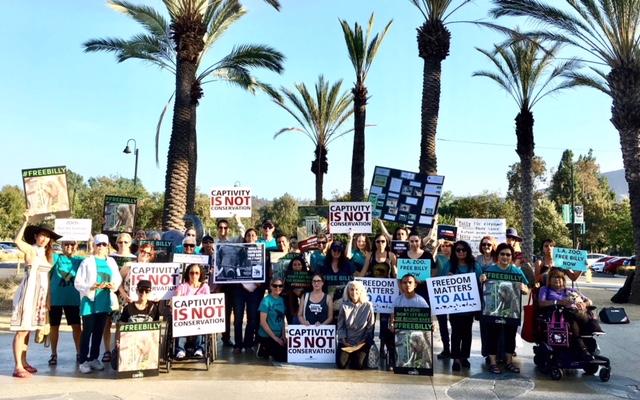 #JaneUnChained was live at the Los Angeles Zoo and Botanical Gardens for the Free Billy Rally with Elephant Guardians of Los Angeles and Los Angeles for Animals calling for the Los Angeles Zoo to release Billy to an accredited sanctuary and to advocate for the end of animal captivity and breeding. Activists pointed out that this zoo, near Burbank, California, the Mecca for entertainment studios including Warner Bros. Entertainment, Walt Disney Studios and Universal Studios Hollywood, along with circuses and marine parks are outdated entertainment venues and not happy places for the animals after all. Zoo officials are invited on any time to respond. Organizers Kiersten Cluster and Cory Mac explain the plight of Billy and the other animals stuck in captivity. Animal Rights protesters interviewed include Hope Casella-Holtum, Renée Marinkovich and Stephanie Varden to name a few from the nearly one hundred activists present. We heard from the opposition as well.  Paige Parsons Roache reported live for JaneUnChained.com

The rally started with speakers from the community and Los Angeles Commissioner, Roger Wolfson. The rally also had hecklers who believed that zoos are necessary. Roger Wolfson’s speech was filled with compassion and reminded the protesters that what they are doing is profoundly important. It is a wonderful opportunity to encourage the opposition to yell and speak against us, because they’re not looking good when they do it, it’s not helping their cause, and the dialogue is important because we know we have the winning argument when we can respond in a calm manner. We need to hear the opposition so we can speak to it and soften their hearts. He continues to say that “It is animals like Billy that fill our hearts with love, their gentle spirit, their huge presence, their magnificent vicariousness and playfulness, their simple grace, it fills our hearts with love of nature. They want their freedom just like other animals and humans”. The protesters were there because their hearts are open, handing out flyers to people and children who are the future.  Every moment spent being kind and generous is changing the world.

Billy the Elephant has been held alone for 28 years! Research and documentation has supported that Billy the Elephant is not happy and he is very depressed. Elephants are communal, social animals and they are not meant to be kept in a solidarity state. Their existence and well being depends on socialization and they need a sense of community just like us.  Keeping Billy alone in confinement is an egregious form of torture to a social being. They are cognitively complex and forms complex social bonds. They need the access and opportunity to engage in behaviors that they engage in the wild. Zoos are the equivalent of prison for animals. A lot of people who come to the zoo are animal lovers and they come out because they are interested in seeing non-humans and have an affinity towards to animals. The protesters want to guide that affinity to educate people and keep the best interest of the animals in mind. There are other opportunities to learn and see these animals by visiting animals at sanctuaries such as The Gentle Barn, Marine Mammal Care Center, La Brea Tar Pits, The Farm Sanctuary, and Return to Freedom.

How to Get Active in Activism? Fia Perera Let Loose on How to Be a Firecracker!