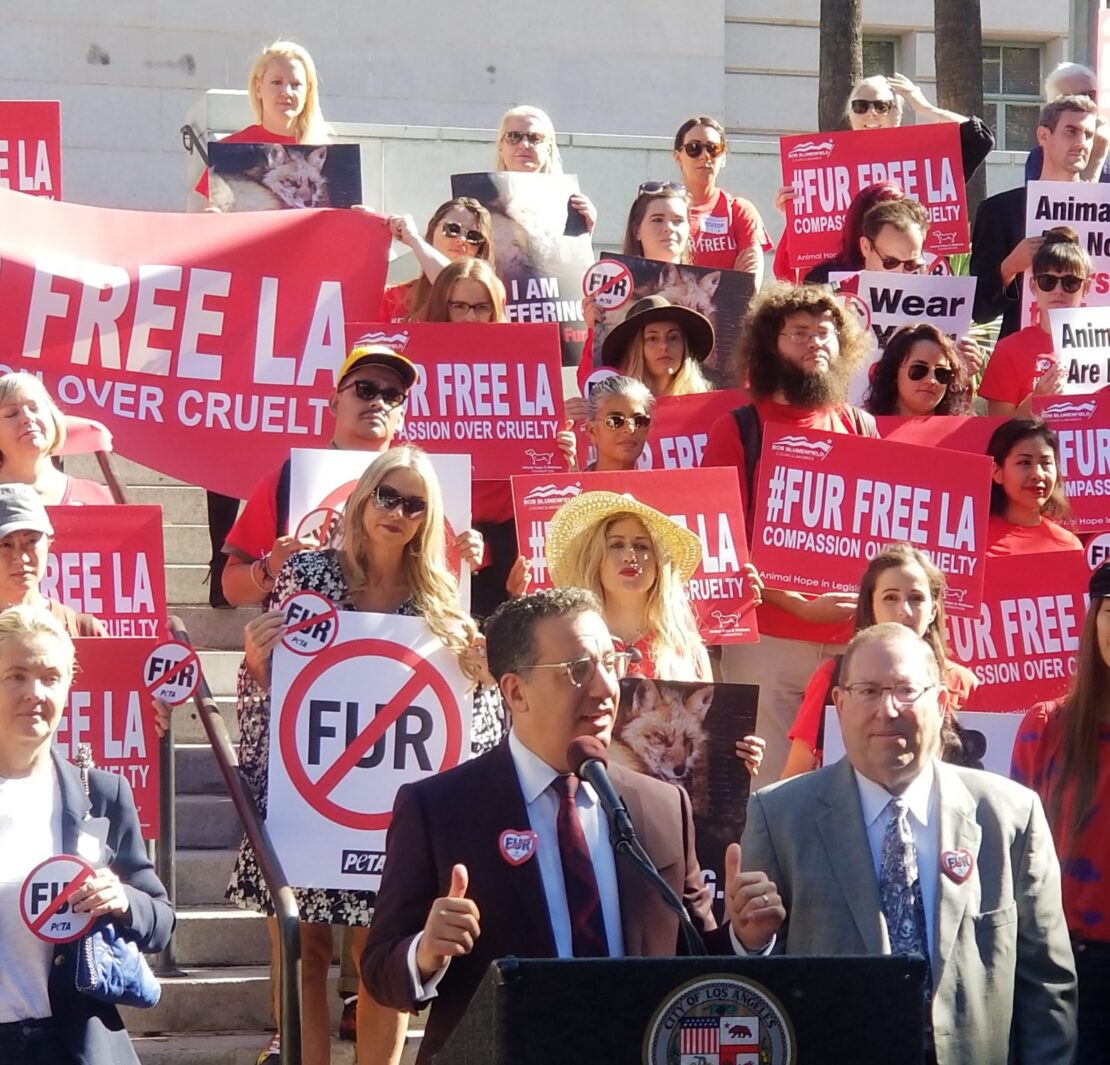 Breaking News!!!!! LOS ANGELES HAS BANNED THE SALE OF FUR!!!!!! #JaneUnChained LIVE for the celebration after the crucial vote to BAN FUR sales in Los Angeles!  Maggie Q, Jade Nicole, Tony Kanal, and Joana Krupa were a few of the celebrities that came out in support of the fur ban that could spell the complete collapse of this cruel, medieval and utterly unnecessary industry that tortures and kills so many foxes, monks, rabbits, coyotes, and other animals! Councilmember Paul Koretz proposed the ban and councilmembers Mitch O’Farrell and Bob Blumenfield  were instrumental in the unanimous approval. There will be a three year phase out in which the companies that sell fur will be allowed to make the necessary changes to stop selling new fur products. It will also prohibit the farming of animals for fur in Los Angeles.  One issue these legislators all agree upon is that the fur industry does not treat animals humanely, and we can only hope that huge victories like these will extend to all living beings one day!

#JaneUnChained was at a news conference with a coalition of groups including PETA and Animal Hope and Wellness, prior to the vote! It was amazing to see so many groups in the animal rights community come together. Charitable groups are stronger if they work together and support each other!  Today was an example of that unity achieving a huge victory for fur bearing animals!

Council member Paul Koretz makes a point to say that fur is purely done for fashion, and it is a cruel and unacceptable practice. He says that there are many cruelty-free materials that can be used instead of an animal’s fur. He says this ban is just the first step in the right direction and more issues involving animal cruelty will be sure to follow.

Jane captures the moment live: the unanimous vote in favor of a fur sale ban. Excitement erupts in the crowd as soon as the ban is announced and supporters are overcome with emotion as they convey their feelings! This is one victory for the animals and we cannot wait to see many more follow!
THE VICTORY CELEBRATION!

#JaneUnChained is LIVE celebrating the Los Angeles City Council’s unanimous vote to BAN FUR SALES in the City of Los Angeles, California. This is an EPIC policy change that is bound to ripple across the world!

Following the lead of West Hollywood, California, Berkeley and San Francisco, California, banning fur is being on the right side of history! This celebration took place at Au Lac DTLA, a fabulous all-vegan restaurant in Downtown Los Angeles, after the vote. Many of the team celebrated National Burger Day, also today, by ordering the Au Lac special burger with a Beyond Meat burger patty. You can also top it with a vegan fried egg and veggie bacon to make it even more over the top good!

So many individuals and organizations worked together to make this happen. Councilmen Bob Blumenfield and Paul Koretz led the way. Marc Ching of the Animal Hope and Wellness organization provided crucial footage of fur bearing animals being skinned alive to make the cruelty case and PETA was, as always, right there with organizational support! Stars, including Mission: Impossible III actress Maggie Q, model Joanna Krupa and musician Tony Kanal, lent their voices to the effort and appeared at the news conference prior to the vote!

Mark Ching, the founder of Animal Hope and Wellness and the group Animal Hope in Legislation, explained his experience visiting fur farms. He has seen the awful treatment of these animals. Ching describes the agonizing screams of a fox being skinned alive. He and his team have done so much hard work to make this campaign to ban fur a success!