The founder of The Save Movement, Anita Krajnc, speaks to #JaneUnChained #LIVE! This movement is growing exponentially and now has 600 chapters in 61 countries. It’s also developed the Climate Save Movement and the Health Save Movement! Meet this extraordinary woman was put on trial for giving water to a thirsty pig bound for slaughter and used it to put animal agriculture on trial! Join us!
Today Anita came to speak with Jane about the growth of The Save Movement and its expansion into health and climate change issues directly related to animal agriculture. On the 1st of January, 2019 several of the Save Movements groups bound together to hold joint demonstrations in their respective cities at the Brazilian consulates and embassies. This was in response to the Climate Save group’s announcement, “Brazil’s President Jair Bolsanaro has triggered an Amazon Emergency with his intentions to privatise the Amazon and industrialise it with more animal agriculture and mining.” At the Brazilian Consulate in Toronto, the Toronto Pig Save organized a series of events, including chanting with vegan handouts, a performance, and a die-in. The Save Movement encouraged all members of the Brazilian government including President Bolsanaro to sign up for Veganuary and pledge to go vegan for the month of January.
Anita Krajnc is also quoted saying, “If President Bolsonaro signed up for Veganuary and committed to going vegan, he would reverse his intentions to destroy the Amazon rainforest and instead preserve the precious rainforest  and restore degraded areas. Our planet is in a climate crisis and we need to protect rainforests to prevent imminent ecological collapse. The Amazon is a vital home to indigenous peoples and 10 million species. The Amazon is the lungs of the Earth. It acts as a carbon sink, absorbing carbon out of the atmosphere while supplying 20% of the global oxygen supply.” It is true, the destruction of the Amazon is the destruction of our species and countless others. People need to take a stand and protest the destruction of this sacred resource. We must demand that the Brazilian government reverse their plans to tear through the forest and create further damage to a region every living being depends upon.
Furthermore, Anita explains the roots of The Save Movement, which are its vigils. The Save Movement holds vigils in order to share the truth of the plight of billions of animals across the world at the hands of human beings. During a vigil participants are asked to “bear witness.” Bearing witness means to not turn away from the anguish of another being but to instead, come closer, as close as possible to comfort them in their time of suffering. For example, at a pig vigil activists can be seen giving water to thirsty pigs and even connecting with them by gently placing a hand on them. This movement is truly gaining in popularity and we hope to see the existence of a Save Movement group in every city worldwide. Hopefully one day everyone will know the truths behind the windowless walls of the agricultural industry, and they will choose compassion by transitioning to veganism. Please visit The Save Movement website to find a Save Movement chapter near you or create one of your own. Please choose to support the movement that aims to save our planet and everything upon it! 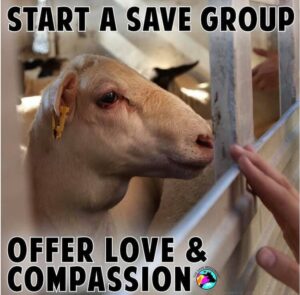