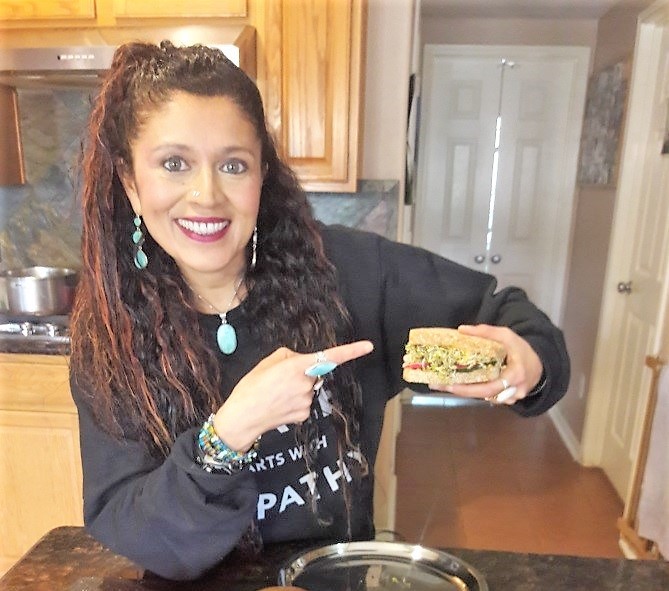 #JaneUnchained #Live with JaneUnChained contributor, ahimsa activist, and non-dairy vegan Dolly Vyas-Ahuja, making whole food, plant-based hummus sandwich. This sandwich is not only animal product-free, but it is also oil-free. It’s packed full of beneficial nutrients, so you’ll feel uplifted instead of weighed down after eating it!

We love it when our contributors start their live videos with a song and Renee King-Sonnen’s Rowdy Girl Sanctuary song at that! Dolly is an Ahimsa activist who is very outspoken about the problem with eating animal products as a dietary choice. The concept of ahimsa can be found in the Hindu, Buddhist, and Jainist practices as a “respect for all living things and avoidance of violence toward others.” Dolly’s mission is to educate and help spread awareness of the cruelty towards animals focusing on the dairy industry. She comes from a Gandhian family and her grandfather was a freedom fighter who fought for social justice in India. She hopes to have Indian temples take a pledge against cruelty and ban the use of dairy products. She will also be a speaker a the World Vegan Conference taking place in New Delhi, India in July. Her speech is titled, “Why Dairy is Not Ahimsa”. She hopes to see humanity return its initial instincts and create a fully compassionate world one day.

Dolly points out that heart disease is the number one killer of people and it is caused by eating animal products! Dolly adds all of her super whole food plant-based ingredients into her blender. Some of which include chickpeas, which are high in fiber, red peppers, and cumin which is a great spice to ward off insomnia. Who knew?? After adding all of the ingredients, she blends them all together to create a beautiful hummus. Next, Dolly compiles the sandwich with chopped veggies and completes it with super food broccoli sprouts she made herself using a seed jar! Try making Dolly’s sandwich at home with the recipe below!

Ingredients for the Sandwich

–        Combine all ingredients in Vitamix till smooth, add a little water as you go.

Put On Your Fancy Pants and Head To Fancy Plants Cafe!