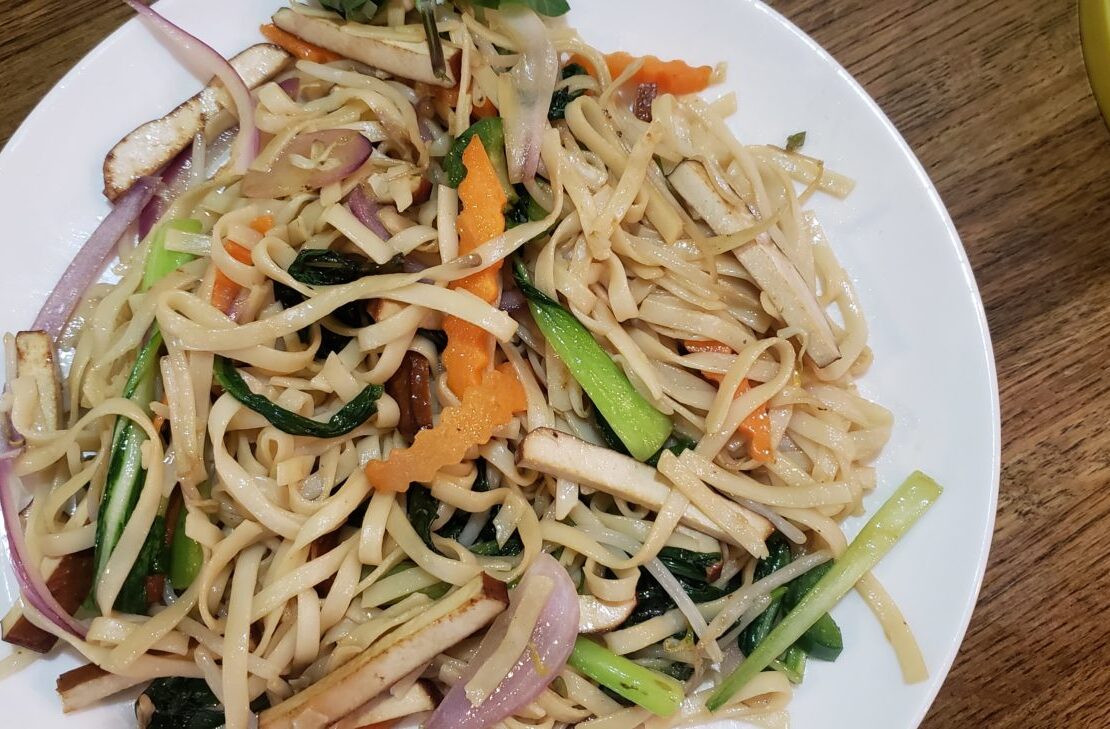 Vanessa Marsot traveled to Chicago to try the first Chinese vegan restaurant in the area, Veggie House. Do a google search for vegan restaurants, Chicago and this one is sure to turn up!  This Chinese restaurant simply dazzled, with their spicy, fresh, and flavorful cuisine.  They aim for traditional Chinese dishes with a healthy twist for the modern consumer who’s looking for taste as well as wellness.

Vanessa went “backstage,” and watched the chef, a veteran chef from fine hotels both in China and here, skilfully toss vegetables with balletic grace over flames that were striving to leap into the pan. They then served Vanessa and friend several dishes to try, including dumplings made with colorful vegetables such as beetroot, spinach, and carrots, Taiwan noodles with mushrooms,,. salt and pepper Shitake mushrooms, and turmeric mushrooms. They certainly got the healing powers of mushrooms, one of the superstars of healthy eating, along with rockstar turmeric which has anti-inflammatory fame. The dishes had the traditional Chinese feel without the heaviness, and with some kick and innovation added in.

Vanessa traveled to Chicago for the day, on her first day off from an intensive home renovation project she’s doing in Indianapolis. When she’s not renovating homes, she’s teaching or performing Pole dance, and working as a psychotherapist, and running Ellora Wellness, a global vegan organic wellness center, that strives to show how we can live happily and joyfully in harmony with the planet and without causing harm to any living beings.

The Owner Of Veggie House

Owner Zoey advocates for plant-based eating to combat climate change, and stated that veganism is the future. It has been a challenge to open this restaurant, as she first got the space at the beginning of the Coronavirus pandemic.  She held on to the space having to pay rent for many months while everything was shut down until they could have their grand opening in August. A few months later they had to shut down indoor dining again and as of the end of October, they can only do takeout, delivery, and outdoor terrace dining. But Zoey believes in this restaurant and the vegan message so she continues to fight on to keep it going and to supply healthy and delicious vegan Chinese food to thier customers.

As a special treat, Vanessa got to meet loyal #JaneUnChained viewer, Tom Vencil, who recommended this place, and who’s a Chicago native. Witness him doing the blender dance on camera, even sans blender!

Vegan Restaurants, Chicago Style:  Back To The Food!

Let’s take a look at the variety of vegan dishes Tom and Vanessa tried on their visit to the Veggie House in Chicago.  All of the food looks amazing!  I love Chinese food…just love it.  I wish I could hop on a plane and head on over to get some now.  If you live in Chicago or are visiting, be sure to stop by Veggie House for a taste of awesomeness.

Thank You For Joining Us On Our Vegan Restaurants:  Chicago Adventure!

Well, now that I am super starving after looking at all these food photos, I am going to go order me some vegan Chinese food.  Haha.  If you are looking for more amazing vegan restaurants, check out our vegan restaurant reviews section.  There is lots of fun to be had there!  Also, if you are interested in meeting new like-minded vegan/veg people in your neighborhood, consider signing up for plantbasedneighbor.com.  It is a great place to spread your message and engage with other people, so check it out. Until next time…