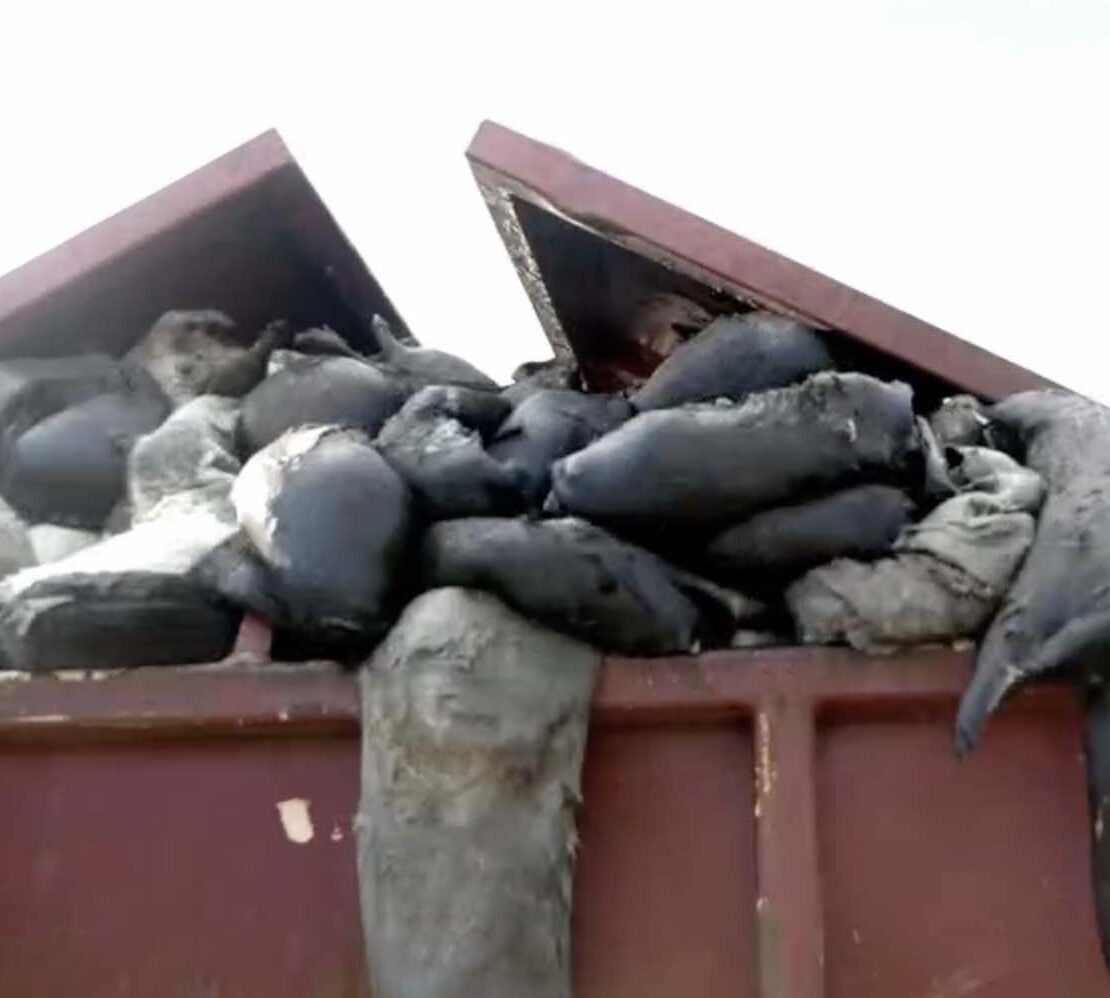 Did You Hear the Mink Massacre Message?

I heard the message from the massacred mink. Did you? If you didn’t hear it, just remove your speciesist earplugs and keep listening.

My friend texted me the USA Today article and the headline looked like a poster from a horror movie. “Dead minks infected with a mutated form of COVID-19 rise from graves after mass culling.” Immediately, the word “culling” caused a familiar resentment to boil up inside me. Culling is one of those words industries use to minimize the violence and barbarism of their acts against  animals. The news media co-signs the sanitizing of violence by repeating that word.

Humans have been frenetically slaughtering millions of mink in Denmark. Why? These purposely bred and systematically abused “fur farm” prisoners, who live out their short lives in tiny, filthy cages, showed a mutated form of the zoonotic illness wreaking havoc around the world. If  a mutation spreads, that could undermine the vaccines. Denmark is responsible for almost half of all mink fur ripped from the skin of animals to be turned into coats, wraps and collars.

Up to 15 million mink have had their throats slit or been thrown into wood chippers, their mangled carcasses shoveled with backhoes into dumpsters and then into shallow graves. There were reports that the mass slaughter was dialed back somewhat after fierce political opposition arose from supporters of the mink industry. But, I saw and shared the images of thousands upon thousands of bloodied mink carcasses spilling out from giant bins and rotting in the dirt. Those photos and videos made it clear that this was a monumental case of animal genocide. Here is my interview with Casper Hilt, a Danish animal activist, who videotaped the massacre and spoke to JaneUnChained from Denmark, as part of a global panel. Why did we entitle this panel “Is this the end of factory farming?” Today, factory farmed mink pose the threat.  Tomorrow, will it be factory farmed chickens, who are also kept in tiny, filthy cages or jam packed into huge warehouses?

We Can’t Kill Our Way Out of This!

It’s not just Denmark’s mink industry that poses a threat. The New York Times reports that, “minks on at least two farms in northern Greece were found to have the coronavirus” and quoted a World Health Organization leader as saying, “The mink farms are a reservoir where the coronavirus is thriving.” One big factor is the horrific conditions in which these animals are kept, which causes them stress and leaves them vulnerable to disease.

On November 28th, CNN reported that “an Oregon mink farm has reported an outbreak of coronavirus among mink and farmworkers. Ten mink samples submitted all came back positive for coronavirus… The farm has been placed under quarantine, meaning no animal or animal product can leave the farm until further notice.” 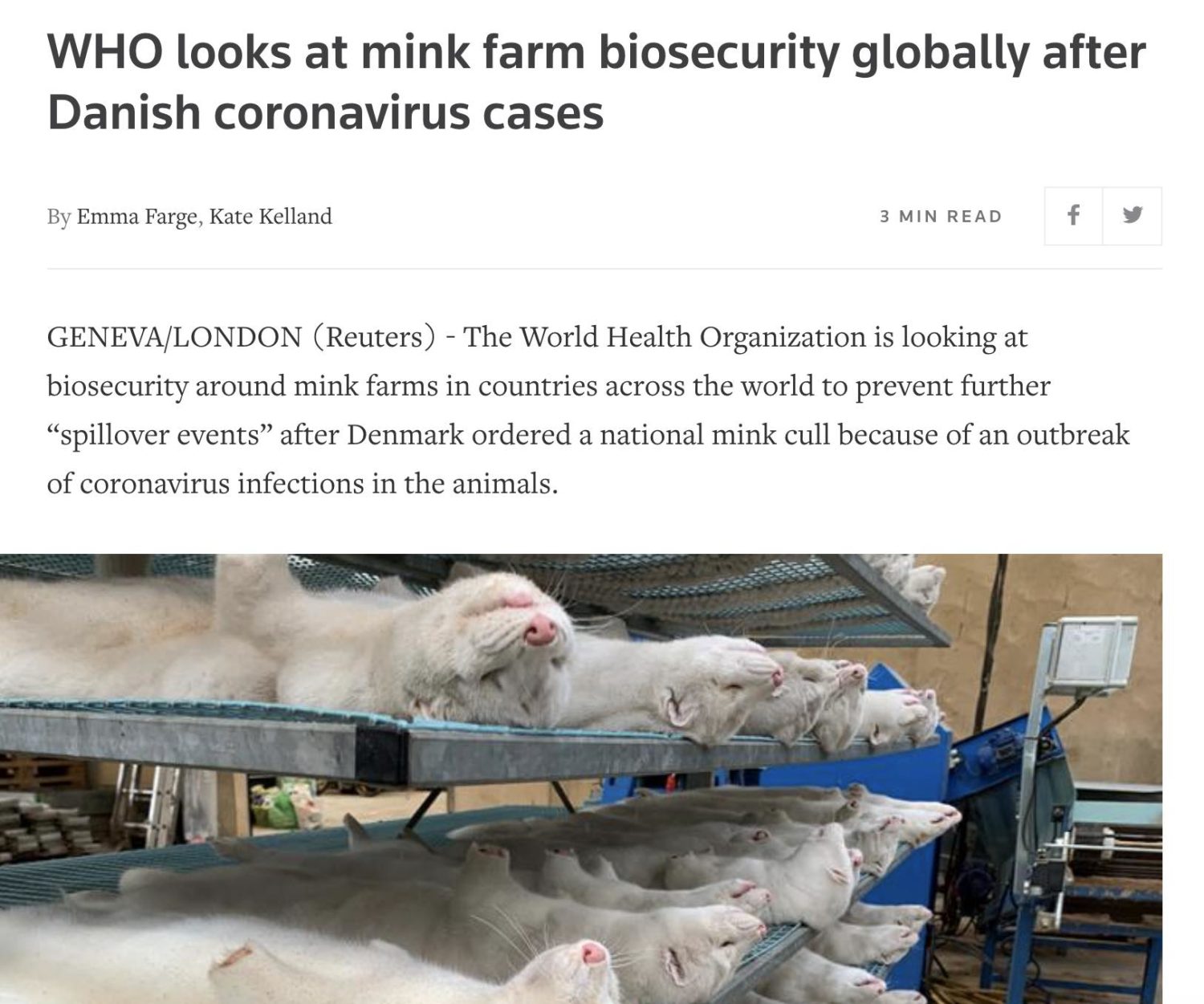 So, Have We Fixed It By Ditching Fur? Nope.

So, has the human race collectively risen up to say: enough with mink coats…we don’t need them? They are a relic of another era. Let’s end the exploitation and slaughter of animals for their fur once and for all? No, we as a human race did not do that. That would make way too much sense.

Instead, according to Reuters, “The World Health Organization is looking at biosecurity around mink farms in countries across the world to prevent further spillover events.” This reaction illustrates the stubborn resistance our species shows to evolving beyond completely unnecessary and large scale animal torture, even when such industries threaten human lives.

Why were the massacred mink rising from the dead? Danish police explained that gases form when bodies decay underground so that “the mink get pushed out of the ground.” The phenomenon has given rise to the nickname “zombie animals.” Even that doesn’t give our species pause. We just keep on keeping on with the forcible breeding, confinement, abuse and slaughter of species after species.

Remember, this whole pandemic is the result of a zoonotic illness that jumped from animals to humans and was first spotted amongst those who’d been at a retail slaughterhouse known as a wet market. Mad cow disease, swine flu, avian flu… all zoonotic. Our toxic relationship with animals and the natural world is at the root of each one of these threats.

When our species suffers as a result, we comfort each other but never show compassion to them… to the animals. Of course, there are some exceptions. Animal activists protested against fur the world over on November 27th, known as Fur Free Friday. Below, activists protest outside a Canada Goose store in Manhattan, a brand infamous for its coyote fur trim.

Their Suffering Doesn’t Count because I’m a Serious Journalist?

Indeed, it is verboten to express any acknowledgment of the suffering of animals in any mainstream media news reporting on events that inflict violence on animals, no matter how massive the toll. In reporting on the mink massacre, there was emphasis on how the fur industry was being decimated. But, one word, one phrase, one reference concerning how these innocent, friendly and curious animals might have suffered? Serious journalists would never do that. The arrogance of our species defies description. Oh, and news media rarely covers anti-fur protests, like this one, that just happened outside Saks Fifth Avenue in Manhattan.

So, Did We Fix It By Ditching Fur? Nope.

Go along for the rise as anti-fur activists do an in-store protest against fur at Saks Fifth Avenue in Manhattan on November 27th, just happens to be the day before the Covid outbreak at an Oregon fur farm was reported. Saks, Canada Goose and/or any rep from the fur industry, is invited on any time to comment.

Humans  Must Evolve Beyond Cruelty or Nature Will Exact Its Revenge

It is so easy to look back on the past and express outrage and horror at the violence our species has inflicted in various ways. Enslavement, pogroms. How could anyone ever participate in something so obviously evil and morally reprehensible? It’s a lot harder to recognize and stand up to evil in real time, when it’s happening now. Well, here’s your chance. This is our chance, as a species, to stop using “jobs” and “industry” and “personal choice” as an excuse to justify a patently obvious barbarity. Look at all the jobs this COVID pandemic has destroyed! Look at all the personal choice that people who’ve died from COVID have lost, Those justifications amount to lazy thinking. Where’s the risk in saying: no more killing of animals for their fur?  Conversely, the risk of not standing up is… the next pandemic could be even worse. Like I said.. there is a message for all of us in the mink massacre.