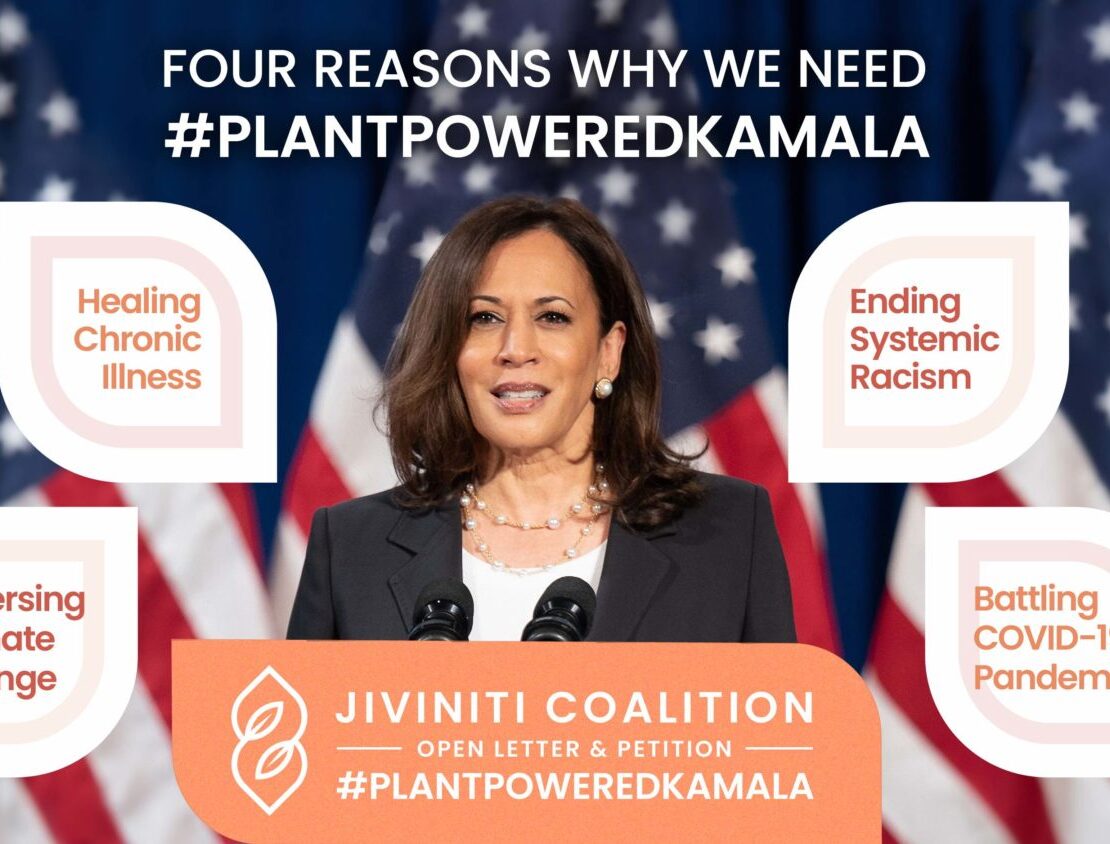 By Nivi Jaswal, Founder of the Jiviniti coalition and President of The Virsa Foundation Inc.

A group of female leaders, most of whom are women of color, have created a petition calling for Vice President-Elect Kamala Harris to try a plant-based diet by taking Million Dollar Vegan’s 31-Day Vegan Challenge.  These women also held a Facebook LIVE news conference on December 21st expressing their reasons for respectfully issuing this invitation.

The women also penned an open letter to the incoming Biden administration detailing a strategy to address the Covid-19 pandemic, as well as the ‘shadow pandemics’ of food insecurity, chronic illness, racial and gender-based structural inequality, and climate change.

The women explained that Kamala Harris has already shown political courage by urging Americans to cut back on burgers. She also co-sponsored vegan U.S. Senator Cory Booker’s bill to stop high-speed slaughter. So, she gets it. Now, America’s most powerful female politician is invited to walk the walk and switch to delicious plant-based dishes.

The JIVINITI Women’s Coalition news conference has been viewed by more than 8-thousand people on the JaneUnChained News Facebook page. The event was co-hosted by me, Nivi Jaswal of The Virsa Foundation, Naijha Wright-Brown of Naijha Speaks and the Black Vegetarian Society of Maryland and journalist Jane Velez-Mitchell of  JaneUnChained News.   More than a dozen highly accomplished vegan women from around the U.S. and the world took part, most taking the opportunity to send a message directly to Harris, explaining why switching to a plant-based diet is crucial to preventing future pandemics, improving human health, ending dietary racism and reversing climate change.

Stephanie Redcross-West of Vegan Mainstream spoke about the lack of visibility and representation for women entrepreneurs, how this situation has worsened during the pandemic, and how plant-powered campaigns such as JIVINITI can play an important role in ending this injustice.

Rohini Bajekal, of Plant-Based Health Professionals UK, described the plight of women health care providers during the pandemic, with an emphasis on women’s health issues and emotional well-being.

Julie Wayne, of Jeeva Bhavana, offered a unique perspective as a white, female, environmentalist running a non-profit in India.

Jasmine Leyva, of The Invisible Vegan, spoke about the lack of visibility and empathy around eating disorders among women of color and how plant-powered campaigns such as JIVINITI can make an impact by kickstarting these key conversations.

Jacque Salomon, of Seeds to Inspire, highlighted the indigenous experience during this pandemic and the struggle for food sovereignty.

P Angelicia Simmons, of Fannie Lou Hamer Institute, shed light on the legal issues surrounding food inequality and how it impacts girls and women of color.

Jackie Norman, of VeganFTA, offered a powerful perspective. As a former dairy and beef farmer in New Zealand, she has first-hand experience of how the females of the human species are systemically used to exploit the females of the bovine species (mother cows). She is now a vegan, animal rights activist and is speaking up about how all industrialized animal agriculture is based on the violation of the female reproductive system as virtually all the animals used are forcibly inseminated.

Gwenna Hunter, of Vegans for Black Lives Matter, spoke of her work urging African-American leaders to take the power back through food choices that empower and enrich the black community.

Dr. Ruby Lathon, Ph.D., a leading nutritionist, cancer survivor and founder of Roadmap to Holistic Health, who was featured in the documentary What the Health, brought it all together with a passionate appeal to Harris to lead by example.