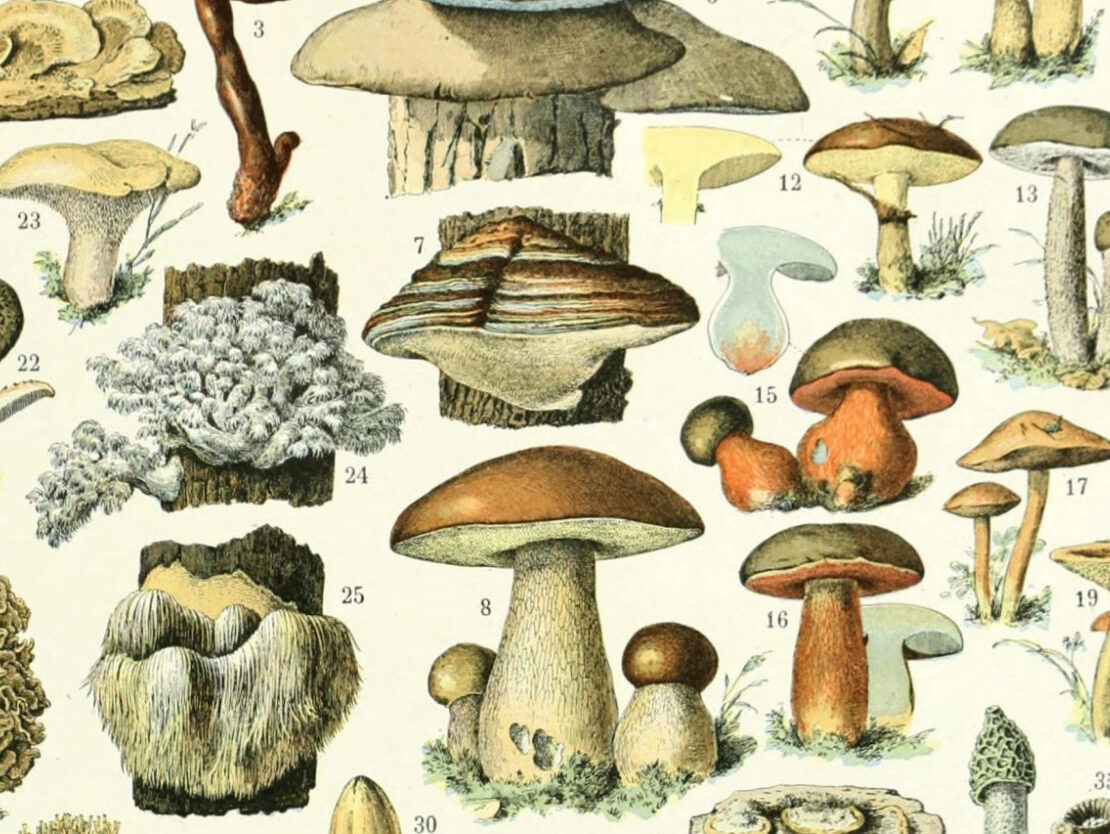 Could mushrooms provide the answer to a myriad of challenges facing the human race? In a word… yes!  Elysabeth Alfano of Plantbased Business Hour interviewed Eben Bayer, CEO of Atlast Food Co and Co-Founder of Ecovative Design.  He is a Mushroom Designer who is transforming shrooms into a variety of useful products. Not just useful to consumers, but to animals and the environment. I like the humble but mighty mushroom, so I watched this conversation with interest. You can watch it too at the end of this article, but here’s the essence.

Eben Bayer’s Ecovative Design is a leading biomaterials company growing high-performance, premium, award-winning products from fungi, that are safe, healthy, and certified sustainable. As the CEO of Atlast Food Co, he’s also behind the company MyEats that has produced MyBacon, an animal-free version of bacon made of fungi.

Mushrooms are…. Fungi. But, What the Heck Is Fungi?

Let’s face it. Fungi is not a particularly attractive or appetizing word. But, all mushrooms are fungi.  Fungi were listed in the Plant Kingdom for many years. But then…. it was determined that they are neither plants nor animals. The Canadian government says fungi, “…belong in a kingdom of their own, separate from plants and animals. Fungi differ from plants and animals in the way they obtain their nutrients.” In short, mushrooms are amazing LIVING organisms, not quite plants and not quite animals. Who knew?

What a Mushroom Designer Has to Say About Fungi

Eben grew up on his family’s Vermont farm but now lives off-grid in the countryside. He studied Mechanical Engineering and Innovation & Design at Rensselaer Polytechnic Institute. However, when he discovered the mushroom and the engineering power of Nature, he became a man with a mission: to promote the power of mushrooms!

“My love affair with the mushroom is with its roots, what we think of it as mycelium, what you find underground. Mushrooms are this super underappreciated kingdom. We have animals, we have plants and we have fungi. And we just haven’t looked at Kingdom Fungi enough. It can help us with plastics and it can help us use fewer animals. Those are beautiful things in this day and age.”

“It’s kind of amazing. When you see a mushroom on a tree, or in the forest, it’s only one to two percent of the biomass that is there. Most of the action occurs underground. Mycelium acts like the internet of the forest. Literally moving a little ion or a little sugar from one tree to another. Doing lots of chemical signaling. And, basically, both communicating between species and also recycling everything. So, it’s really like Nature’s recycling and communication system.”

“My belief is that natural technology, like mycelium or like mushrooms, is the kind of technology we need right now. “ -Eben Bayer, mushroom designer

The Properties a Mushroom Designer Is Looking For

Fungi acquire their food by absorbing dissolved molecules, typically by secreting digestive enzymes into their environment. Like plants, growth is their means of mobility. But, unlike plants, they cannot photosynthesize energy from light. Despite the fact humans have used only a few species of fungi for food, there are thousands of species, some with quite amazing properties. For example, Strength. Eben explains:

“Mushrooms grow by actually taking water and pushing into the tip of the hyphae, which is the single unit of the mycelium. And these are really small. They are smaller than a single human hair. So, there are all these millions of microscopic fibers connecting, which make the mycelium mass, and they can insert incredible pressure. So, for instance, mushrooms have been known to bust through pavement in places. They are incredibly strong. But, they can also be very soft and supple. And they can form leather-like material.”

Elysabeth asked him if mushrooms can also repel water, like plastic: “Yes, much like the lotus leaf. They have this hydrophobic coating they make. It’s a protein. And, if you get our mushroom packaging, in the mail, you can actually try this. You can put a little water on it, and it looks like a lotus leaf. It’s like one of the most beautiful effects in the world.”

Eben met Gavin McIntyre when they were both students. The two co-founded Ecovative Design, which takes its name from ecology and innovation. The World Economic Forum has recognized Ecovative as a Tech Pioneer.  Elysabeth asked him how it started:

“The way Ecovative started 14 years ago was by asking a very simple question: what if we use mushrooms as materials? Not just as food. And we created this field of mushroom material science, which is looking at fungi’s materials, applying them to packaging… We started Ecovative to address Styrofoam plastic pollution. And that is what we are trying to do with our packaging.”

“The recipe for mushroom packaging is very simple. It’s hemp hurd, which is a byproduct of hemp fiber. They take the fibers out of the stock. It’s called decortication. And what’s left is chunky stock material. It’s often used as animal bedding, or just composted. We use that as the base material and then the mycelium fibers grow through and around the hemp hurd, and basically glue it together.”

“We created this technology in 2009-2010, and we started manufacturing in North America. We realized it’s taking a long time. And people all over the world are emailing us ‘Can I get this in my region? Can I get this in my country?’ Rather than try to build plants all around the world, we basically partnered with entrepreneurs.”

“If you leave our packaging in the forest, actually it improves the forest ecology. That is the definition of the materials we should use as humans. Leave it better than we find it.” -Eben Bayer, mushroom designer

Fungi Can Also Be Made into Foam

It’s more than just creating strong but light eco-friendly packaging you can compost in your garden. Eben has more than 10 patents published in over 30 countries. He explains another of his inventions:

“We found another way of growing mycelium that produces another type of material… This is a mycelial form. And as you can see it’s super soft, it’s super flexible, it’s super pliable. This is a really beautiful high-performance material. And you can use this to replace the foam that you may find in a sneaker, insulation foam or aerospace foam. You can also compress it and make it into a very cool skin-like material. And this was the inspiration behind Atlas, and the whole muscle meats we are growing.”

Eben has now gone full circle and is producing new food from fungi. He now runs Atlas Food Co. with the mission to “inspire cravings for delicious, planet-friendly foods, rooted in nature.” This year, its company MyEats has produced MyBacon, vegan-friendly bacon made of mycelia and plants.

“We get the mushroom, the mycelium, to make the same sort of structures, if you will. So those fibers aligning, in the same way, to be meat-like, but we make it in a geometry that is industrializable. We grow these white fluffy slabs, if you will. We are growing these slabs in the form of pork-belly sizes, so we can put them into the pork infrastructure. And then we have industrialized scalable mushroom meat. And that’s what we are all about.”

“99% of the world does liquid fermentation. That’s growing yeast or bacteria in tanks. That’s how you make beer. That’s the original liquid fermentation… What we are doing is solid-state fermentation. So, rather than being in a liquid, it’s literally a solid media. In the case of Atlas Foods, we are using wood chips as that solid media. And then the mushroom belly forms above the woodchips surface. So, when we are harvesting that, we are actually removing this pure mushroom material from the top. And we are left with composted or digestive woodchips as a byproduct (which is compostable).”

The Good Type of Technology a Mushroom Designer Makes

The products of mushroom designers are less engineered than many of the food most people assume is natural. For instance, food from factory-farmed animals. Eban explains:

“The broiler chickens, this strain of chicken they grow industrially, they can’t even walk around. The things we’ve done to these animals’ genetics are not improvements to what they were in terms of the flavor and health experience you get. Or the lives of those animals, which is very horrible. And the strain of mushroom we are using, we’ve got that from a forest in upstate New York a couple of years ago. It’s fresh from the forest, and that’s exactly what we need… This is why I will argue we currently have less technology than in a chicken.”

“If we look at the meat market, 80% of the value, 80% of volume, is in whole cuts. If we want to make an impact on animal agriculture, we are going to address this, right? The minced meat actually is not going to do it.”

It takes 12 acres of land to grow the same amount of meat from animals as Eben can grow in one acre from fungi. And he can grow it in just ten days.

In the vegan world, people may no longer use the term plant-based. Not only because veganism will already be part of the collective consciousness, but because fungi may end up dominating technology. The vegan world may be a mushroom-based world.

Mushroom Tacos. Mmmm In Every Bite!