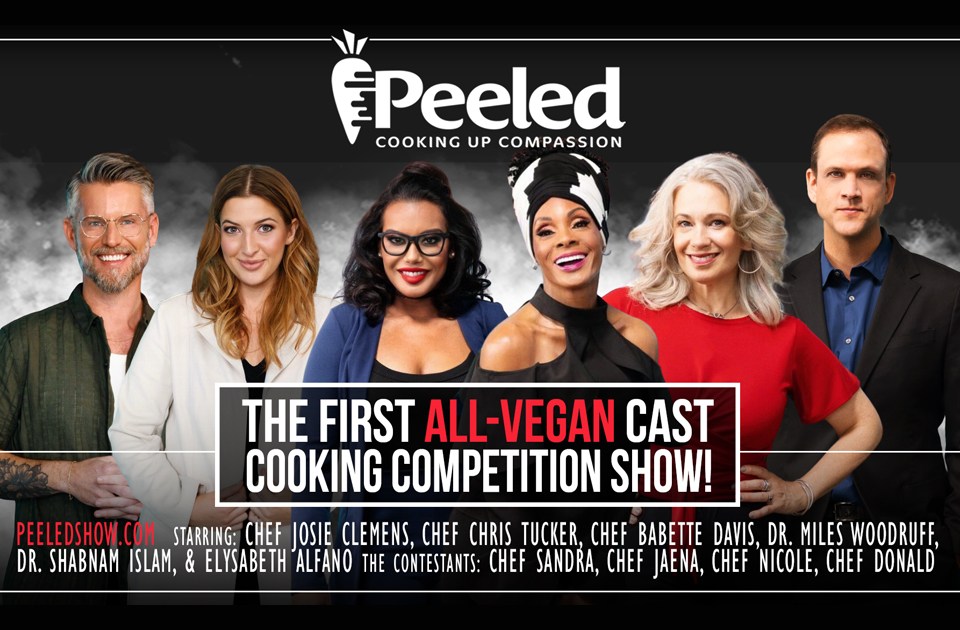 Los Angeles, September 25th,  2022, 9am – We finally have one! A fully vegan cooking show competition, where absolutely everything and everyone is vegan. The cast, the creators, the crew, the food, everything! PEELED, the world’s first all-vegan – from the gaffers to the stars – TV cooking competition, is streaming now on UnchainedTV.

A few days before the star-studded Hollywood premiere at LA’s famed Directors Guild, UnchainedTV’s Jane Velez-Mitchell spoke with Dr Shabnam Islam about this exciting new TV show and about the vKind App.  It’s an easy-to-use digital platform that makes it simple for everyone to find and support vegan businesses, products and services, as well as cruelty-free, healthy and eco-friendly experiences. Watch their entire conversation here:

In the show, Chef Babette and Dr Islam give very specific vegan ingredients to four contestants, who must come up with dishes to impress four judges: Chef Josie Clemens, Chef Chris Tucker, Dr Miles Woodruff, and Elysabeth Alfano. Each contestant must create a different plate from the same ingredients. They are challenged to do an appetizer, an entree, and a dessert. All four competing chefs bring their uniqueness and their vibe to the table. Dr Islam describes who they are:

“Chef Donald has the most experience in the veg-economy as a chef. He has a great restaurant in Las Vegas and he does a lot of good charitable work for children in his community.

Chef Sandra comes from France. She brings all of her French flair, and makes her own cheeses… she truly brings that European flare to her vegan cuisine.

Chef Nicole has done a lot for the vegan movement. She has a nonprofit called Martha’s Project where she does a lot for the houseless community… She’s a creator in this space.”

How an All-Vegan Cooking Show Competition Was Created

Dr Shabnam Islam is a first-generation Bangladeshi-American vegan, who is a leader in the health and fitness industry. She’s a professor of kinesiology, a clinical exercise physiologist and a pioneer of free fitness programs for people in low-income communities. She told Jane how she also got involved in TV:

“My passion for television actually came about when I was in third grade and we went and visited ABC Studios for a field trip and I got an opportunity to sit in the anchor chair and deliver to the camera, reading prompter. I just fell in love with it.”

Dr Islam had a decade of experience hosting in Los Angeles in the health-based sphere when she discovered vKind :

“I hosted the vKind Vibes Show, their very first show on YouTube, and it just kind of snowballed from there. I fell in love with the team, particularly with Star Simmons, and all that she’s doing for the planet.”

PEELED was co-created by vKind’s CEO Star Simmons and Josie Clemens. Dr Islam explains why: “They really came across a brilliant idea. Josie had previously been on Hell’s Kitchen season 20. So, she has experience working in a cooking competition as a seasoned chef.  Star is in it for the animals. That’s always been her mission. It’s all about the animals.”

An All-Vegan Cooking Show Competition with a Message

With an all-vegan cast and crew, the show offers a crucial but simple message: try eating plant-based!  Dr Islam has this advice for those who have not started on their vegan journey… yet:

“Take a look at what you’re buying. Look at the ingredients listed. Every time there’s dairy or meat in it… just try to put it down.  That’s when you can start making some changes. Watch some videos of these pig cages. Go to an LA Animal Save Vigil. Just be present. Just once. And, see if it starts to impact your behavior.”

“Your dollar is your vote. It doesn’t just happen every four years. Every day you spend on something in the meat and dairy industry, it has a reverberating impact across the globe”–Dr Shabnam Islam, Peeled host