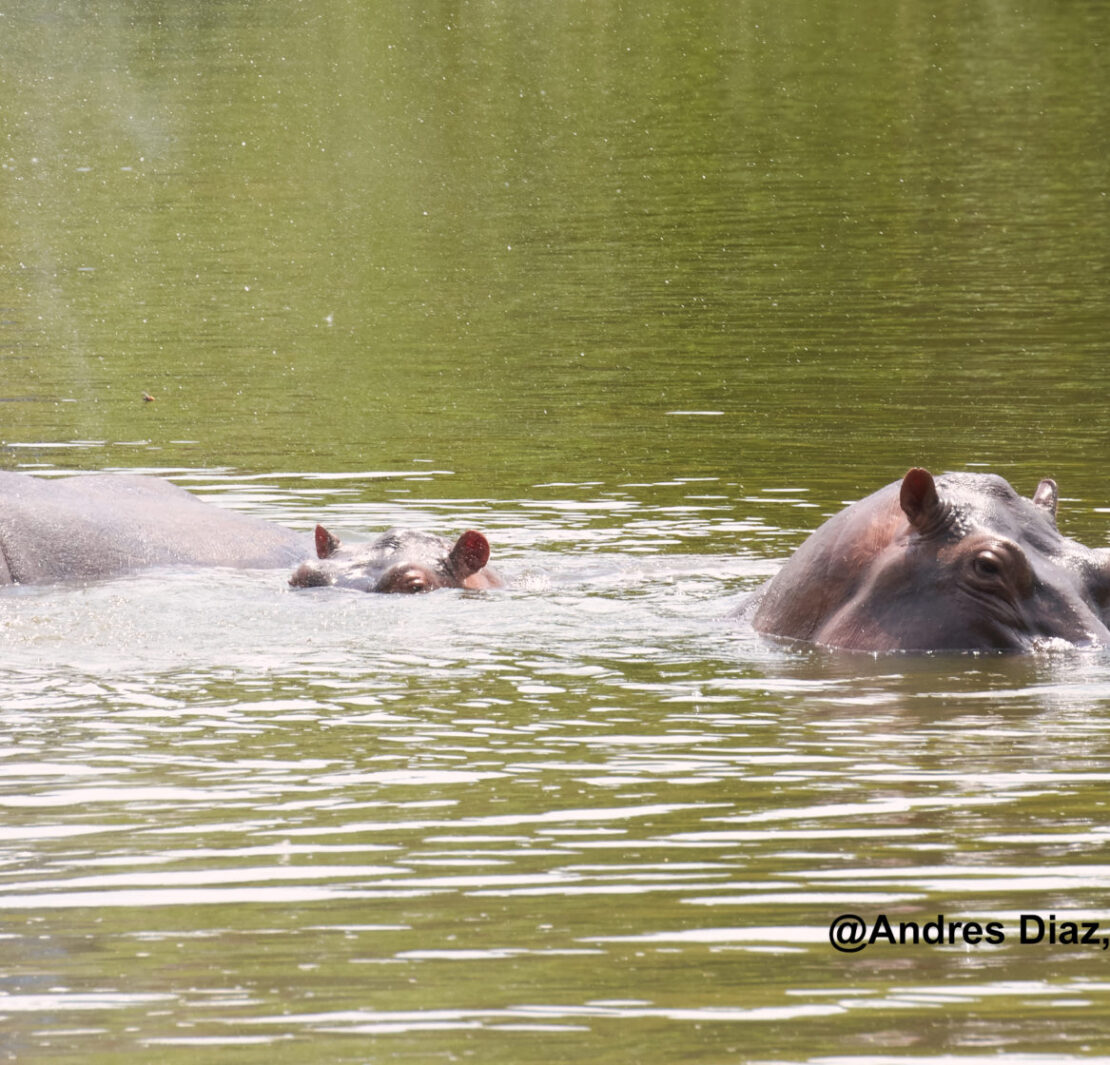 The Hippos Who Made Legal History

For the first time in American history, a U.S. judge has recognized non-human animals as legal persons.  Federal Judge Karen Litkovitz has given the status of interested persons to a population of Colombian hippos. She granted this request, which came from the Animal Legal Defense Fund, in her Cincinnati court.

The infamous drug lord Pablo Escobar illegally imported African hippos to his Colombian ranch in the 1980s.  After he was shot by Colombian authorities in 1993, the hippos became free to roam the estate. Because they are not native to South America, and do not have any natural predators there, they kept reproducing.

Fearing the negative effect on the local biodiversity, the Colombian authorities planned to “cull” (in other words… kill) some of them. However, the selection of this option sparked an uproar, with local and international opposition to such a slaughter. A team from the organization Animal Balance has proposed an alternative project involving non-lethal population fertility control. The Colombian government has now been challenged in court to cancel their deadly “culling” plan and, instead, embrace  what supporters describe as a compassionate and modern sterilization project.

A Colombian lawsuit is now underway aimed at stopping the Colombian government’s plan to kill some of the hippos. In it, the Animal Legal Defense Fund filed an application on behalf of the plaintiffs, namely the community of hippopotamuses living in the Magdalena River. As part of this suit, they needed to ask the US district court in Cincinnati to give interested person status to the hippos. That is because they wanted to depose two Ohio experts in wildlife sterilization. The request might have seemed – at first glance – like some obscure legal maneuver required for a case overseas (based on the 28 U.S. Code § 1782). In fact, it’s history in the making.  Now, in a historic decision, the judge has granted the request and – in the process – recognized non-human animals as legal persons for the first time in U.S. history.

What Does it Mean to Be Recognized as Legal Persons?

Christopher Berry, the lead attorney for the Animal Legal Defense Fund, explains what a legal person is: “Legal personhood is just the ability to have your interest heard and represented in court.”

Some observers wonder how can this decision – to allow experts to travel to another country to advise on sterilization – can be a legal milestone in the US. ALDF lawyers explain it this way.  If advocates for the hippos can bring lawsuits to protect their interests in Colombia, the hippos should be considered interested persons under United States law too. That has never happened in the US before.

U.S. Plays Catch Up to Other Nations on Issue of Animals’ Legal Standing!

Some other countries have already accepted some animals as legal persons. In 2015, a judge in Argentina granted legal personhood to 33-year-old Sandra. She is a Sumatran orangutan who had spent 25 years at the Buenos Aires Zoo. Judge Elena Liberatori’s landmark ruling declared that Sandra is legally a non-human person. This entitled her to some legal rights enjoyed by people, such as better living conditions. She now lives in a primate sanctuary in Florida.

In March 2021, the Islamabad High Court of Pakistan explicitly recognized that animals have natural legal rights. Two months later, the Indian High Court of Punjab and Haryana, recognized all animals in the animal kingdom as legal entities.

There have been several failed attempts to advance similar rights to non-human animals in the United States. But, not until now has there been a legal success of this magnitude. Animal Legal Defense Fund’s Executive Director and CEO Stephen Wells said: “The court’s order authorizing the hippos to exercise their legal right to obtain information in the United States is a critical milestone in the broader animal status fight to recognize that animals have enforceable rights.”

Emma Clifford is the founder and CEO of the U.S. non-profit Animal Balance. They specialize in finding integrated and humane community-based solutions to conflicts involving people, wildlife, domestic animals and the environment. She explains how their involvement in this case started:

“Our medical director for Latin America made us aware in early 2020 of a proposal to put to death the hippos living in her Colombian province of Antioquia, as a way to reduce their population. Animal Balance is set to work gathering international experts in hippos and wildlife population management to find a way forward that would satisfy the Colombian people who do not want the hippos put to death, and to provide the safest and most effective approach for their long-term management.”

Their wildlife fertility experts recommended a fertility control project beginning with the use of PZP: porcine zona pellucida. This immunocontraceptive, administered via a dart gun injection, has been found to make female hippos sterile for at least eight months. This method will not disturb the male dominance behavior patterns (as experts say could happen with surgical or non-surgical sterilization of males).

Animal Balance did not initiate the lawsuit in Colombia and is not a party to it, though. Colombian animal rights attorney, Luis Domingo Maldonado, brought the suit and used Animal Balance research results to support his case.

“Our goal is to provide the safest, most evidence-based method for reducing the hippo birthrate while taking into account the interests of the native species, the environment, and the people who live among the hippos.”– Emma Clifford, CEO of Animal Balance.

What Will Happen to the Hippos Now They Are Legal Persons?

The battle to save Colombia’s hippos has not been won… not yet anyway.  Camilo Burbano Cifuentes, a criminal law professor at the Universidad Externado de Colombia, said to The Guardian: “The ruling has no impact in Colombia because they only have an impact within their own territories. It will be the Colombian authorities who decide what to do with the hippos and not the American ones.”

However, it sets some sort of precedent in the U.S. which may impact other American cases. In October of 2019, the New York Court of Appeals agreed to decide whether Happy, an elephant at the Bronx Zoo, should be a legal person. That case, filed by the non-profit Nonhuman Rights Project, is still ongoing. But, in January 2020, Bronx Supreme Court Justice Tuitt agreed that Happy is more than just a legal thing.

Stephen Wells does believe that the Cincinnati ruling can make a difference in the lives of the hippos. He said: “While the immediate impact of the ruling narrowly authorizes animals who are parties in foreign litigation to obtain testimony or documents, it sets a profound precedent that courts can recognize enforcement of legal rights directly on behalf of animals.”

“For the hippos, the ability to obtain the experts’ testimony about the viability of managing the population with sterilization is quite possibly the difference between living and dying.”– Stephen Wells, CEO of the Animal Legal Defense Fund