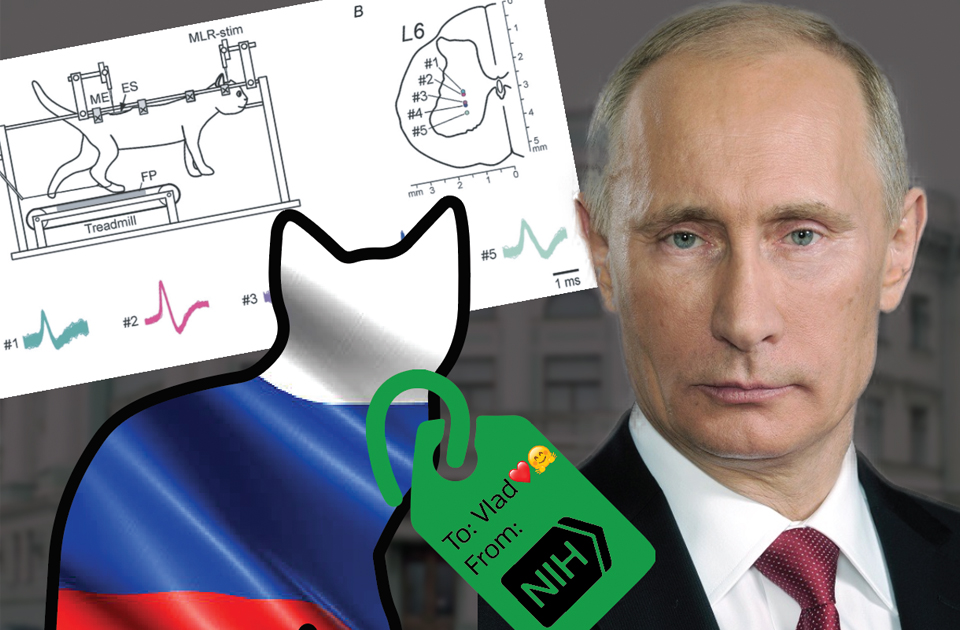 The non-profit White Coat Waste Project has discovered that the US National Institutes of Health (NIH) is funding Russian vivisection labs doing experiments on cats.

White Coat Waste Project (WCW) alleges that, as recently as November 2021, the NIH shipped $549,331 via a university to Russia’s state-run Pavlov Institute of Physiology. These are to fund experiments in which researchers removed portions of healthy cats’ brains, implanted electrodes in their spines, and forced them to walk on a treadmill.

This non-profit already exposed the practice of the NIH using taxpayer money in foreign animal labs. The White Coat Waste Project and Advancing Law for Animals (ALfA) have joined forces to file a lawsuit against the United States Department of Health and the NIH for exempting these taxpayer-funded foreign animal labs from the required legal oversight. However, WCW revealed that the Russian Government runs several of these labs. In line with the recent Russian invasion of Ukraine, and the sanctions against Putin’s regime, this revelation has sparked outrage.

“Russia should not be receiving tax dollars for animal experiments while it’s being sanctioned left and right by the United States for the abuses that it’s causing in Ukraine.” – Justin Goodman, White Coat Waste

UnchainedTV‘s Jane Velez-Mitchell interviewed Justin Goodman from WCW and Vanessa Shakib from ALfA about their shocking discovery. You can watch it all here:

We invite the NIH, the Pavlov Institute and any other related entity to respond.

What Has WCW Discovered About the Russian Vivisection Labs?

Justin Goodman is the Senior Vice President of Advocacy and Public Policy at White Coat Waste Project. This organization aims to stop taxpayer-funded experiments on animals. For more than 15 years, Goodman has led high-profile campaigns to expose wasteful and cruel taxpayer-funded experiments on animals. He has also led successful efforts to pass local, state and federal laws for reducing and replacing wasteful animal experiments. This is what he said his team discovered:

“We used information on publicly available databases through the National Institutes of Health. Looking at published papers coming out of Russia, we’ve discovered that the NIH has been shipping US taxpayer dollars to a Kremlin-run animal testing laboratory called the Pavlov Institute in Saint Petersburg, Russia, for experiments in which, most recently, 18 cats had portions of their brains damaged, their spinal cords destroyed, electrodes implanted into their bodies, and then were forced to run on treadmills before being killed. This project received $550,000 just last year in 2021. Since 2018, it’s received $770,000 of taxpayer dollars for these horrendous experiments on cats. Our hard hard-earned money is being shipped over to the Kremlin to government-run laboratories that are abusing animals.”

Are the Russian Labs Part of the Lawsuit Against the NIH?

Vanessa Shakib is an expert in animal law, government accountability, and illegal business practices. She co-founded and co-directs Advancing Law for Animals, a nonprofit law firm for nonhuman animals. Shakib is an Adjunct Associate Professor of Law at Southwestern Law School. Her track record in government oversight informs her work at ALfA, where she has successfully challenged cruel regulations. She said this the current situation.

“What is horrifying about the experiments taking place in Russia is that Russia is in the middle of bombing Ukraine. Sanctions are being imposed by different countries against Russia. But, at the same time, Russia’s doing animal experimentation with our tax dollars.

“Foreign countries are using our taxpayer dollars for animal experimentation with no oversight as to animal welfare standards. That’s why Advancing Law for Animals is thrilled to represent White Coat Waste in a lawsuit against the NIH challenging this illegal foreign animal lab loophole that allows our taxpayer dollars to be used in foreign countries without even the minimum animal welfare standards that exist for domestic laboratories receiving taxpayer funding for animal experimentation.

“Congress has been clear. No matter what facility you are, you need this Animal Care Committee. Despite this very clear mandate, at the same time, the NIH has enacted a rule saying the opposite, that if you are a foreign animal lab receiving taxpayer funds, you don’t need this minimum standard of care.”

There is currently a Bill circulating in Congress (HR. 5527). If passed, it should stop this funding. Goodman explains:

“There’s legislation that we’ve helped introduce called the Accountability and Foreign Animal Research Act. That’s the AFAR Act, HR. 5527, and this bill was introduced by Congresswoman Lisa McClain from Michigan. This legislation would prevent tax dollars from being used to fund animal experiments in foreign countries that are deemed adversary nations.

“We helped introduce this bill in October of 2021. We actually met with Congresswoman McClain back in 2019, when we first flagged that countries like Russia and China had dozens of laboratories being funded by the US National Institutes of Health with our tax dollars. And we ended up flagging this for the White House early in 2020, and just got crickets. After that happened, we decided we needed to work with Congress. That led to this new piece of legislation that would at least ensure that our funding is not going to countries that do not have our best interests in mind, and also pose a threat to our national security.”

While the lawsuit is taking its course, White Coat Waste urges Americans to lobby for the proposed legislation that could stop US taxpayer funds from going to Russian vivisection labs. Goodman explains:

“You can visit Whitecoatwaste.org and, on our take action page, you can contact your member of Congress and ask them specifically to co-sponsor the AFAR Act. There’s a button there to take action and you’ll see the AFAR Act listed there. There’s an easy form to fill out. It’ll send a letter right directly to your member of congress. If you’d like to make a phone call, you can visit Find My Rep online and you’ll find the contact information for your House of Representatives member, based on your zip code. You can call them and ask them to co-sponsor the AFAR Act.

“This should be a common-sense bipartisan issue that everyone can agree on. And we are certainly cautiously optimistic that we will see some kind of resolution here. This is a slam dunk for the White House. If they want to communicate that they’re taking the situation seriously and being hard on Russia, the very least they can do is say that we’re not going to ship them money to torture animals. That’s something everyone can agree on.

“We are working with members who are directly urging President Biden to cut off the funding for these Russian laboratories, in concert with the other sanctions that are being levied against Russia for its aggression in Ukraine.” –Justin Goodman, WCW

“There are about 1,100 facilities receiving US taxpayer dollars for animal experimentation, and 353 of them are outside of the United States in about 57 different foreign countries. What we’re seeing happening in Russia is not unique.” – Vanessa Shakib, ALfA