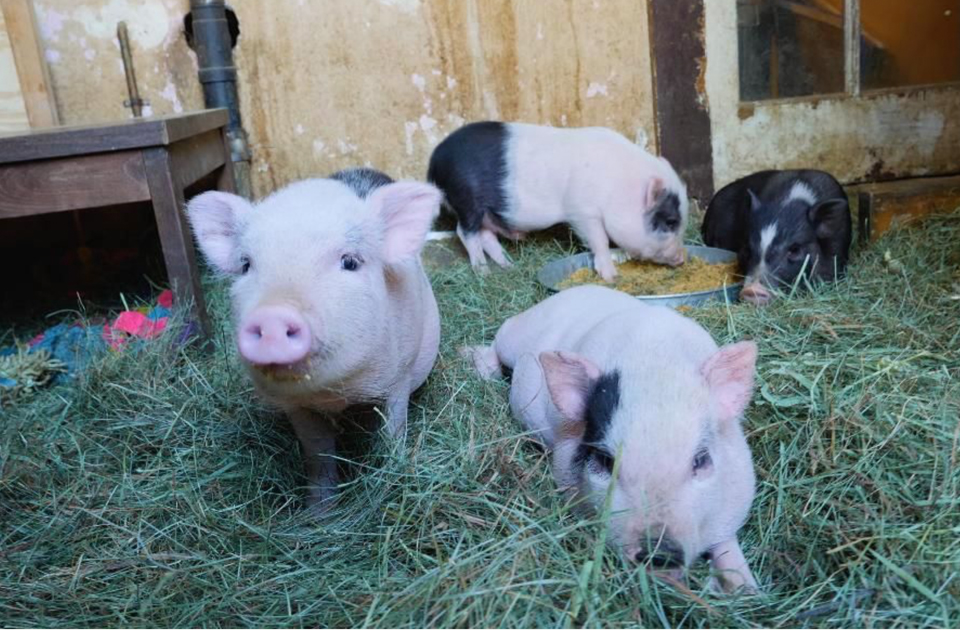 Cast members of Pig Little Lies, the first reality show starring a family of pigs, speak about the problem of abandoned potbellied pigs.

You heard it right. A reality show starring a family of pigs. We are not talking about humans with undesirable traits here. This is about real pigs, these lovely and clever four-legged mammals, animals whose lives on factory farms are the stuff of nightmares. But, if left to live in peace, pigs can have very colorful and interesting family lives. Pigs are so interesting that you can even make a fascinating reality show out of a family of pigs rescued from the brink of death.

This is precisely what UnchainedTV has done, not by design, but by accident. Dante and Beatrice were two abandoned potbellied pigs who found themselves marked for death after being dumped at a high-kill shelter in Southern California. A country singer rescued them only to discover that Beatrice was expecting piglets. After that, a whole saga worth filming unraveled. The show Pig Little Lies was born and the 5 episode series is already streaming on the free network.

This is not only a first in the world of reality TV shows, but it is also the first original series on the UnchainedTV streaming network. The series was produced and directed by Emmy-winning producer Eamonn McCrystal of Inspired. LLC. The executive producers are Jane Velez-Mitchell and three prominent animal welfare philanthropists: Jim Greenbaum, Cindy Landon and Dr. Sailesh Rao. This show, which has even been featured in the Hollywood trade magazine Variety, is more than just entertainment. This show has a serious message, and its cast recently reunited to shout this message loud and clear: potbellied pigs are not toys to be played with and then discarded! But, this is exactly what’s happening across the United States. You can watch the entire interview here.

The Cast Reunites to Talk About the Plight of Potbellied Pigs

In addition to a family of pigs, the show’s cast also includes some humans. Three women head the human cast: Simone Reyes, Velez-Mitchell, and Cindy Brady. Simone Reyes is a TV personality (Dogs In the City), author and country music singer who has rescued hundreds of animals. As Vice President of Communications for Social Compassion in Legislation, Reyes has been instrumental in passing laws that protect voiceless animals. In the series, she is the one who rescues Dante and Beatrice just before their execution.

Velez-Mitchell is an award-winning TV journalist, New York Times bestselling author, former CNN Headline News host and founder of UnchainedTV. In the series, she becomes Simone’s adventure companion. Cindy Brady is a wildlife rehabilitation expert who ends up hosting the pigs in her laundry room and having to deal with the unexpected surprise of 13 little piglets. Other cast members include Melissa Breslow, from Open Eyes Foundation, who does healing ceremonies,  Lindsey Baker, the host of the Pig Little Lies launch party and Teri Crutchfield, the well-known pig expert who runs her own sanctuary in San Diego called Saving Animals and Healing Hearts. Crutchfield was also featured in the Netflix series Pet Stars. These six pig-loving women got together to send a message to the world in support of pigs.

Cindy reported about the family of pigs: “They’re doing great. The kids are good, and they’re a family. All of them are spayed or neutered. They are healthy and happy.” Cindy is looking for sponsors for each pig from the TV series. She has just created an organization called Tiny Masters. You can visit the website and see all the pigs and select one to sponsor. Pigs can get very expensive. Along with the hay and feed, there are vet bills and the cost of maintaining shelter, etc. Of course, Cindy didn’t know what she was getting into when she took in Dante and Beatrice because nobody knew, at that moment, that Beatrice was already pregnant. Those who sponsor a pig can get private tours of the LA-area sanctuary and meet all the pig cast members and some of the human ones too.

Cindy Brady explains: “The idea with the sponsorship came up because of the animals staying. Five of the babies got adopted out to wonderful homes. But, I still have seven of them. And I figured they could stay together as a family unit. But, there’s a lot of money involved.  We came up with the idea of sponsorship. Somebody can adopt a pig, and it is kind of your pick.  You make a monthly contribution, but you don’t have to take him or her home.”

Exposing the Scam of “Teacup” Pigs

The drama of Beatrice and Dante is not unique. In the US, people breed potbellied pigs, often falsely label them as “micro” or “teacup” pigs when they are simply babies, and then sell them for exorbitant sums claiming they won’t get any bigger. Those who buy them as pets often get rid of them when they realize that the pigs keep growing, often to well over 100 pounds. They dump them into animal shelters, which are unlikely to spay or neuter them. What is the result of this irresponsible behavior? Many pigs are killed when nobody wants to adopt them. Beatrice and Dante were the lucky ones. Reyes explains:

“I saw a picture of the two most pathetically sad little bonded pair at one of the shelters. That really set off alarms because there are certain shelters that are high-kill. I just thought, ‘oh my God, a bonded pair. That’s going to be twice as hard to get them out because homes just aren’t available widely.’”

Simone Reyes thinks that one of the possible solutions would be to pass legislation that prevents shelters from offering animals for adoption without first sterilizing them.

But, the problem begins with people breeding and selling these animals. Velez-Mitchell spells it out: “The big problem is that greedy people are breeding these pigs, and they’re selling the babies as ‘teacup pigs’ or ‘micro pigs’… and there’s no such thing.”

“We need a law in place to stop the breeding, but there’s so much criminal activity going on when it comes to breeding and selling of animals.” -Simone Reyes, Social Compassion in Legislation.

What Is the Point of a Reality Show About a Family of Pigs?

The only relationship most people have with pigs is limited to eating them in the form of a hot dog, bacon or ham. Many people never stop to think about who the pigs were. How old was she when someone killed her? Did she have a family? What happened to her brothers? A reality show like Pig Little Lies invites people to think about who they’ve been eating and it could inspire them to change. Lindsey Baker says,

“The genius of the show is the fact that it’s just like when you watch a regular reality show. I watch a lot of reality shows. I will start asking: who are these people? When you watch, you get to know them, and you see their quirks. When people are watching these pigs, they get drawn in.”

Potbellied pigs are just pigs. Like us, they all have their unique personalities no matter if they are living in someone’s house or dying on a factory farm. They are intelligent and sensitive, and they enjoy being with their family. Simone Reyes says,

“It’s a very big lesson for people who are still eating meat and drinking dairy. If you can see them as individuals, you will be unable to eat them or harm them — or pay somebody else to kill them.” -Simone Reyes, Social Compassion in Legislation.

You Can Parent a Pig… Virtually!

“Some of them have been adopted to wonderful homes but there is this large family unit that remains. And Cindy, needs help. This is expensive. They need hay, and vegetables are not free. Veterinary care is not free either.”

By making a small monthly donation to Tiny Masters, the new organization set up to help this family of pigs through a sponsorship program, you can be part of history, sponsoring a pig TV star.

Velez-Mitchell has been one of the first sponsors to join the project: “I am  fostering Valentino. I’ve agreed,  we just made that agreement the other day, because all of this is happening in real-time. We shot this very recently and it just started streaming! Our incredible Emmy-winning producer, director, and editor, Eamonn McCrystal, has been working around the clock.”

“This series will have you questioning everything you thought you knew about pigs. This is a loving family that wants to stay together. They are so smart, sensitive, and gentle.”- Jane Velez-Mitchell, founder of UNCHAINEDTV