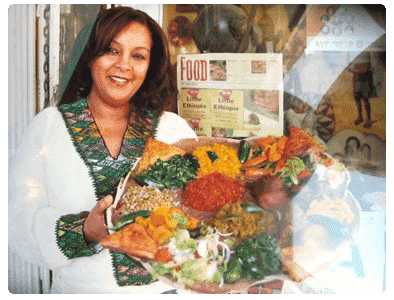 #LunchBreakLIVE hits Little Ethiopia, Los Angeles and Rahel’s Vegan Cuisine, the world’s first vegan Ethiopian restaurant, which has sparked many imitators! This award winning restaurant on Fairfax, just off Olympic in mid-city LA, is named after Rahel Woldmedhin and she is with us cooking up a storm in the kitchen! For more, visit: rahelvegancuisine.com
#LunchBreakLIVE in Little Ethiopia, Los Angeles, with a traditional Ethiopian coffee ceremony and vegan desserts at the amazing Rahel’s Vegan Cuisine. Our coffee ceremony is performed by Rahel Woldmedhin herself, the owner of Rahel’s Vegan Cuisine, You must check out this fabulous  vegan Ethiopian restaurant at  1047 S Fairfax Ave,  Los Angeles, CA 90019.
Our fabulous taste tester Jessica Steinberg, who has just announced her own vegan clothing line, provided the three photos above. Thanks to Prabhat Gautam for arranging this latest Prabhat’s Pick!
And, they have epic, vegan desserts, like this mango cream cake!

Vegan Chef Reacts to Seeing Pigs Headed to their Deaths!