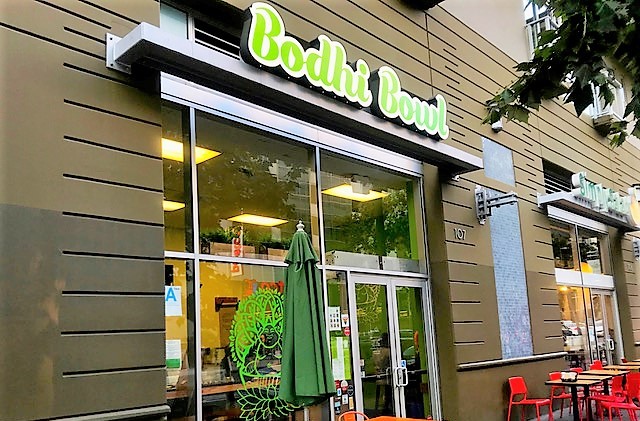 Join in on the tasty fun of Bodhi Bowl’s 1-year Birthday celebration! Come get down and get your favorite bowl or build your own. Join Antoinette Westcott and as she celebrates with Ali Cruddas, the owner of the restaurant, getting an inside look at how they make amazing dishes. On this day Ali is showing us how to make their signature black bean chili.

Ali became a vegan after being encouraged by a friend who was an activist for the animals. Ali decided that if she could not kill an animal then she should not eat them. Her hangup was mayonnaise until she came to the United States and discovered veganaise!

Ali created the concept for Bodhi bowl after being a private chef for many years. She felt there was a discrepancy in casual healthy dining. She decided to make a concept with a lot of variety so people can make customize their orders to their tastes.

Antoinette was given a  Bodhi Bowl making training by Ali during her visit. They made a “Giving Bowl,” which ten percent of the proceeds from this bowl go to an animal charity. The charity that Ali is donating to is Downtown Dog Rescue. This organization goes to Skid Row where there is a large population of homeless people with their dogs. They give free vaccines and food to the animals down there every Wednesday.

That bowl looked amazing and Antoinette enjoyed a few bites before they had to finish making the chili. Next, Ali takes the finished chili and makes her Los Angeles special, the “Frito chili bowl,” topped with pico de gallo and vegan cheddar. Even with all of this, the festivities aren’t finished. There is a huge chocolate cake to be eaten in honor of the 1-year anniversary and one of the employee’s birthdays. Wow what a fun celebration!  Check out Bodhi Bowl the next time you’re in Downtown LA! Healthy diverse cruely-free casual dining for all!

Photos and camerawork by Eric Faison.

Get Your Groove on for Charity this Weekend!