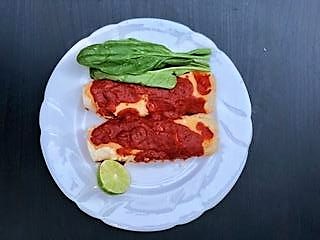 Marley Ficalora, the creator of The Produce Vegan Challenge and the Good Food For Good Giveaway makes Spinach Enchiladas. Patrizia Mari Barretto for #LunchbreakLIVE on Jane Velez-Mitchell.
Start off by sautéing onions and garlic. Add water to the sauté and no oil. Marley says it comes out more delicious without the oil! He avoids using oil or sugar in his cooking. He sautés the onions and garlic until they are brown and then he adds the zucchini and carrots. Later, he adds in refried beans, and stirs it around. Add spinach and a little seasoning to taste and you have the filling for your vegan spinach enchiladas!
Marley has been vegetarian since birth! His mom was vegan when she was pregnant with him and his brother. His dad was diagnosed with multiple sclerosis when Marley was younger. His father’s doctor recommended that he go on a fully plant-based diet to give him the best chance to battle against a debilitating condition. Marley has never had meat or fish and he has been vegan for a few years. He says eating whole fruits and vegetables as part of his vegan Produce Section Challenge has helped him even more!
Marley is full of money saving tips as part of his vegan challenge. He can tell you how to shop all plant-based on a budget. Marley’s enchiladas were so good, they made Patricia his new fan! So try to eat whole produce like Marley, and be prepared to reap the benefits!
Check out The Produce Section Challenge (Vegan)
Join the Produce Section Challenge Group on Facebook! 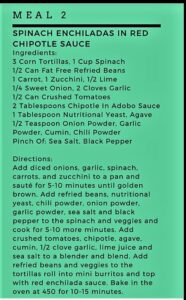 Spectacular Soup and More at The Soup Goddess!