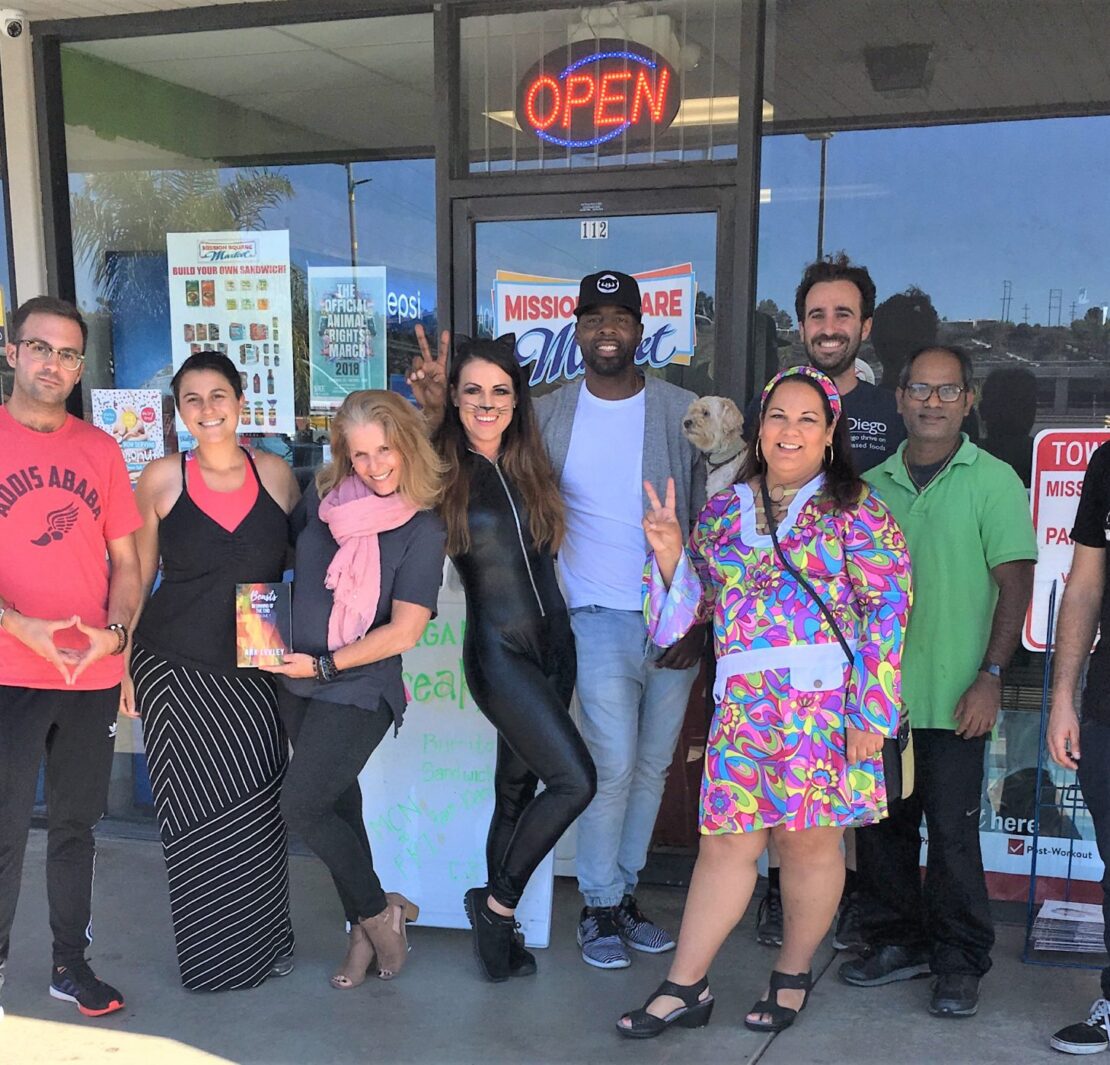 This little market is packed with vegan products. From snacks and cruelty-free candy, to natural cleaning products and kombucha and vegan soft serve on tap! They also have amazing vegan options from Michelle May’s Seva Foods brand like their freeze-dried Space Ice Kream, and their coconut jerky. This is definitely your one-stop vegan shop in San Diego! Sonny, the owner of the market, made the decision to take a stand and change his grocery store all plant-based. He says this is what he wanted to do as his life’s mission. Amazing!

Trevy James got a very enviable-looking sandwich he is taste testing with lettuce, tomato, tempeh, veganaise, mustard, and jalapenos to spice it up! Next, Danielle tries the Botko herb cheese spread with the grainless gluten-free crackers. Danielle gives the spread two thumbs up and Dawn agrees! Paige hops in and tries a bite of the sandwich too and expresses how good it is! If only we could get a bite too!

Turnip Vegan decided to go vegan after he watched the documentary Food Choices and he has been vegan for two years. He decided to use his videography talents to help spread the vegan message. Amazingly, he cooks for his family during the holidays so they all have a plant-based meal that he can eat too! He is slowly helping his family transition to veganism!

Trevy James went vegan five years ago as part of the Rastafari lifestyle he adopted. He is the beat master and Paige actually stumbled across their song while doing a #LunchBreakLIVE with Amber Rose Martinez (@MamaChingonaVegana on Instagram) and she and her kids were dancing to it!

Danielle has been vegan for three years. She was loved animals as a child but she was raised to eat meat and animal products. One day as an adult she was walking through her kitchen and she had an epiphany that she really loved animals, so she decided to look into not eating them. Danielle googled “how to not eat animals,” and the powerful documentary Earthlings came up. After watching the film, she vowed to never eat animals again. She eliminated animal products in her kitchen and she hasn’t looked back since. Now she has an anti-cruelty podcast that explores alternative options like stem cell meats. She also interviews wonderful vegan guests including all of the influencers that you see in this video!

Dawn went vegetarian when she was four years old. She ate a piece of fish and there was a bone in it, and she instantly made the connection “that that was a living being.” She has been vegan for seventeen years! Now she helps reinforce the vegan businesses in the community!

Wow what an amazing group of vegans today! Check out the links below for more information on this wonderful group!

For the unedited version, go to Trevy James (feat. Turnip Vegan) – “Eatin Like That” by Trevy James / Ital Man Music https://soundcloud.com/…/eatin-…/s-EJDP9 on #SoundCloud