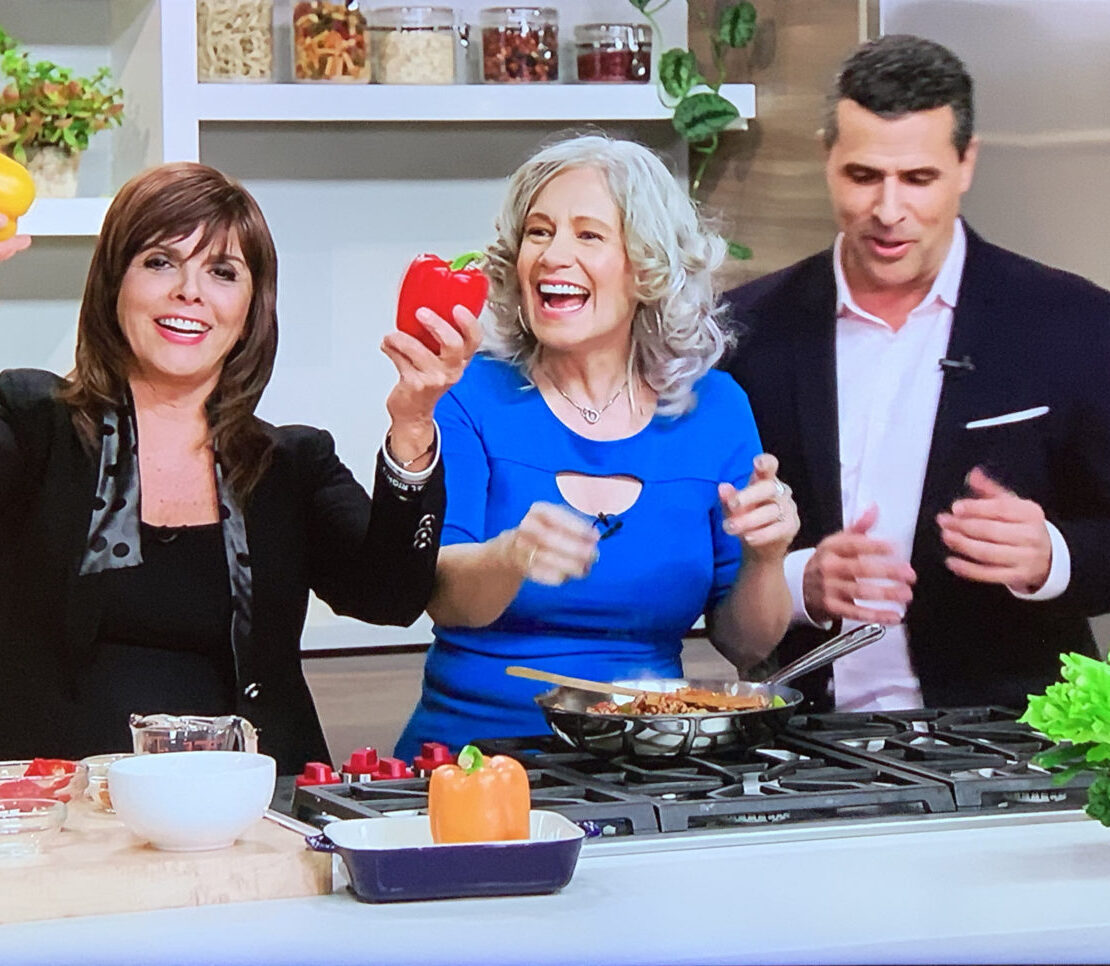 Our very own Jane Velez-Mitchell made an appearance on the nation’s only plant-based, syndicated radio show, The Elysabeth Alfano Show on WCGO Radio and the Smart Talk Radio Network, to talk about her new vegan cooking show on Amazon Prime, New Day New Chef.

Yes! Finally there is a vegan cooking show! New Day New Chef is hosted by New York Times bestselling author and former CNN Headline News (HLN) host, Jane Velez-Mitchell, who is well-known for advocating a vegan lifestyle. Season one features eight episodes of fun, delicious, easy vegan recipes, such as a tantalizing tower of triple-decker veggie burgers, Spicy Stuffed Italian Peppers  and a Superwoman bowl of well massaged kale. Love eggs? We show you how to make eggless, zero-cholesterol, deviled eggs that will be a hit at any party!

“In this New Day of climate and health consciousness, anyone can be a New Chef, and we’ll show you how,” said Eamonn McCrystal, multi-Emmy Award winner and Executive Producer of New Day New Chef. “There’s a new appetite for plant-based food, and we’re serving recipes and information to a large, curious community of foodies and home cooks who want to put their ethics on their plate.” 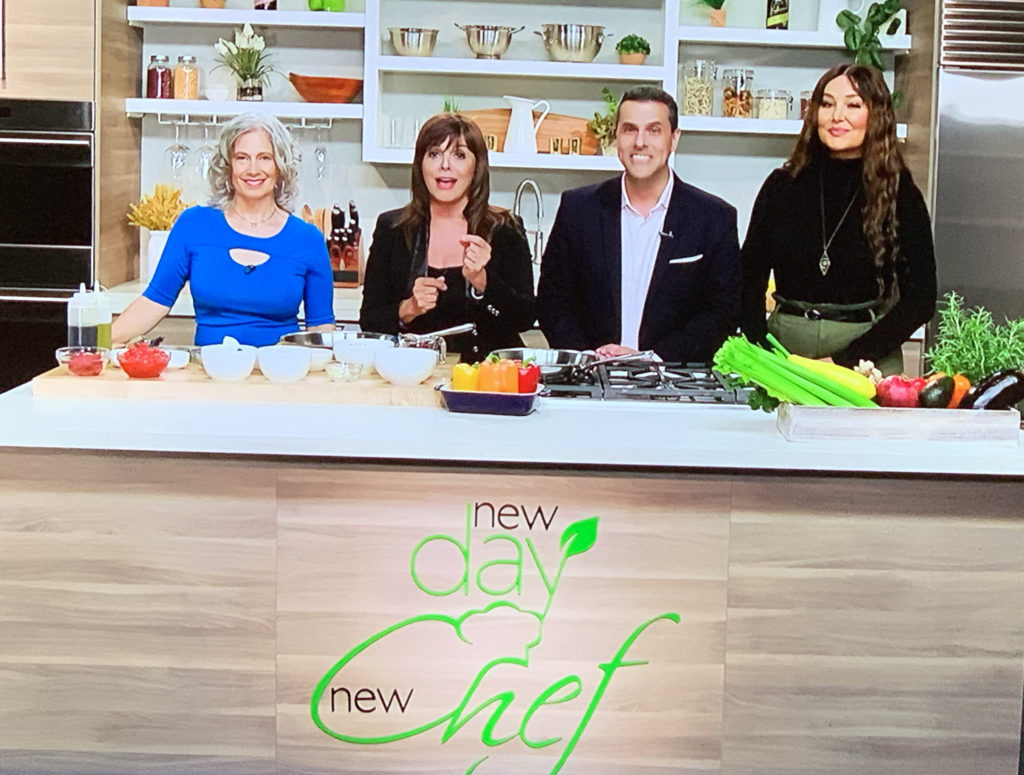 Each episode features a different celebrity co-host, new chefs and a fresh panel of taste testers eager   to sample delicious dishes. From Olympic medalists to movie stars, from muscular body builders to sinewy yoga masters, New Day New Chef entertains Americans while helping them reinvent their diets, boost their energy, lower their carbon footprints and transform their lives with a simple switch to plant-based foods. 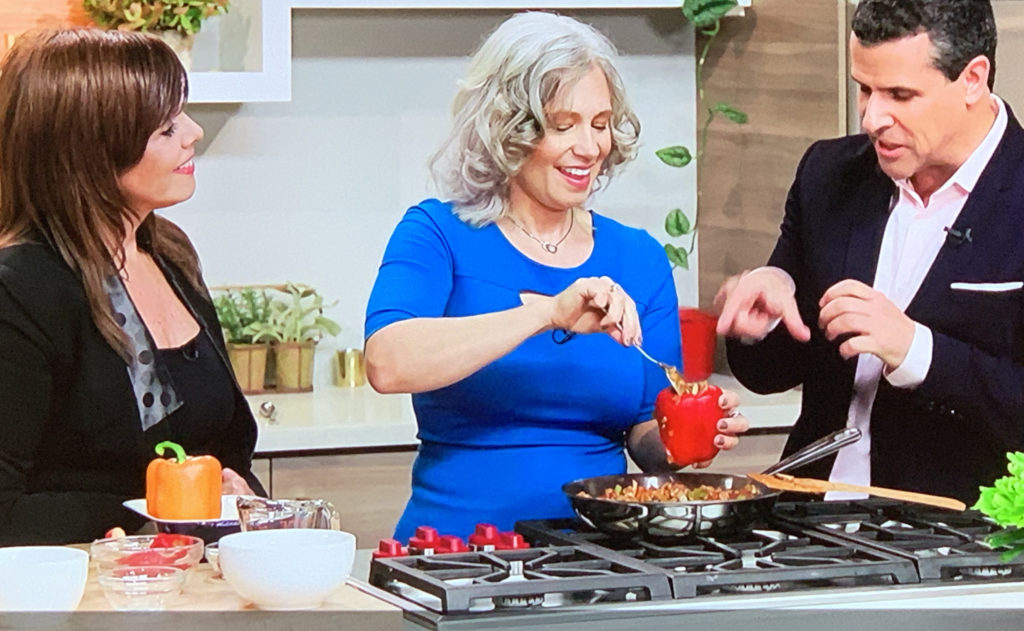 “Food is what unites us,” notes one of the Executive Producers, syndicated radio host and TV Chef, Elysabeth Alfano.  “There is no better connection than the connection we experience over cooking together and sharing a meal.  If that meal is healthy for us, the planet and animals, it’s a triple win!”  Alfano cooks her recipe of Spicy Stuffed Italian Peppers for Velez-Mitchell and Episode Co-host and Latin podcast sensation, Marco Antonio Regil in episode 5.

In addition to CNN Headline News (HLN), host Velez-Mitchell’s television chops include the nationally syndicated Warner Brothers/Telepictures show Celebrity Justice, and local Emmy-winning stints at KCAL-TV in Los Angeles and WCBS-TV in New York.  Jane was also honored by Los Angeles LGBT Pride as Person of the Year 2010. She is the author of four books including the bestselling memoir, iWant: My Journey from Addiction and Overconsumption to a Simpler, Honest Life and founder and chief content editor of JaneUnChained News, a multi-platform social media news outlet.  Head over to Amazon Prime Video to watch New Day New Chef!

Vegans in The Military: Sgt Vegan Reports for Duty