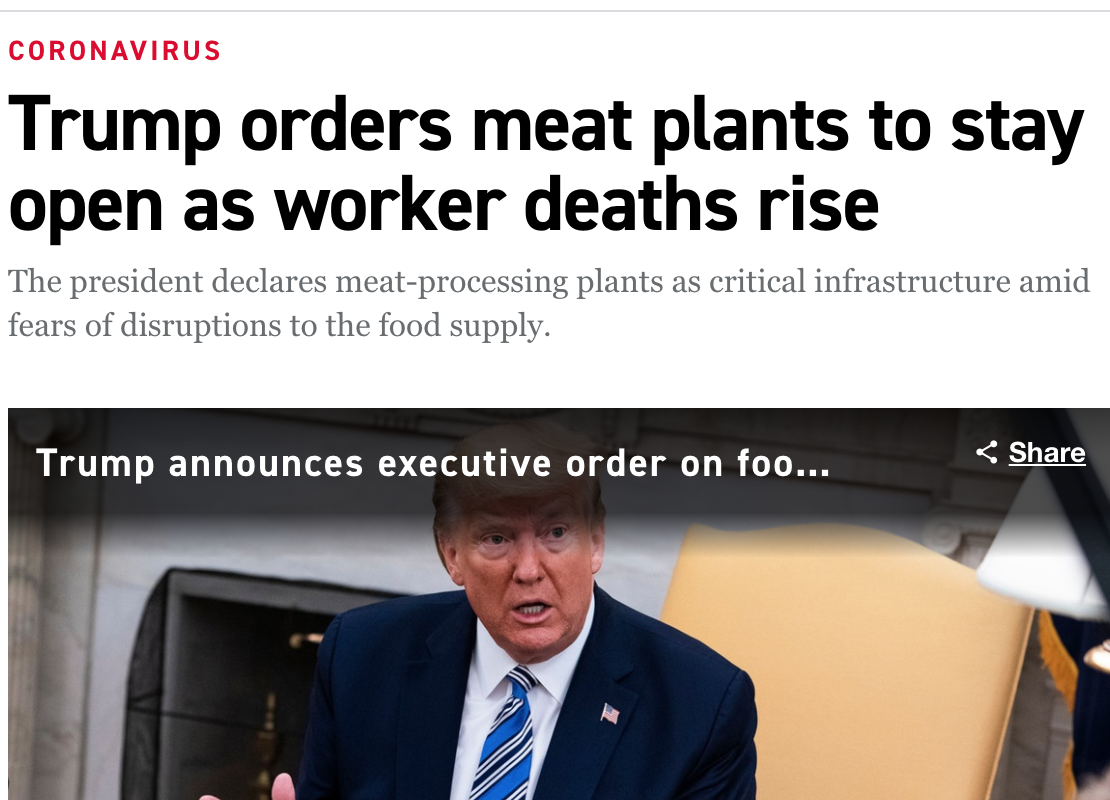 The COVID-19 slaughterhouse crisis is bringing many otherwise overlooked injustices to light. Pig, cow and chicken killing facilities in the U.S. have become hotbeds of coronavirus infection, leaving some workers dead and others ill. This tragedy has united two sometimes unconnected groups: those advocating for the rights of workers and those advocating for the rights of other sentient beings called animals.

President Donald Trump has sparked widespread outrage with his demand that slaughterhouses remain open, even if that means workers might die from coronavirus as a result.  The president declared that the slaughtering of animals for beef, chicken and pork is a “critical infrastructure.” To that, one slaughterhouse worker responded, “Trump says we’re part of critical infrastructure, that we’re essential workers. I don’t feel critical. I don’t feel essential. I feel sacrificed.”

Meanwhile, images and discussion of America’s many wet slaughter markets are also hitting mainstream media! TheirTurn.net‘s Donny Moss, Jill Carnegie of Slaughter Free NYC, NYCLASS‘s Edita Birnkrant and Rachel McCrystal of WoodstockSanctuary.org discuss the horrors of wet markets and how this is an opportunity to evolve past slaughter, in all its forms.

Animal activists, who have long pointed out the environmental racism inherent in the slaughter industry, have joined others in expressing horror at the prospect of sending workers to their possible deaths to produce something that is anything but essential. Indeed, the entire COVID-19 crisis is believed to have stemmed from the torture and killing of animals in a wet slaughter market in China. As millions of vegans survive, thrive and exhibit better health stats than the public at large, animal activists fiercely dispute the notion that “meat” is an essential product.

Meat is, in fact, destroying us in many ways. It is a leading cause of climate change, habitat destruction, wildlife extinction and preventable human diseases like heart disease. It is also responsible for world hunger. “Do not equate food shortages with meat shortages,” says one animal activist. “The only reason we have food scarcity is because farm animals are consuming most of the food produced on this earth.” Because animals eat so much more than they produce as food, eliminating meat and dairy is the fastest way to eliminate world hunger. That, you might say, is food for thought.

“Those who consider themselves progressive and even advocates for the rights of workers are actually subsidizing the exploiters when they buy and eat meat or dairy,” said one animal activist adding, “connect the dots already.”

Try ThanksLIVING to Honor Those Turkeys!