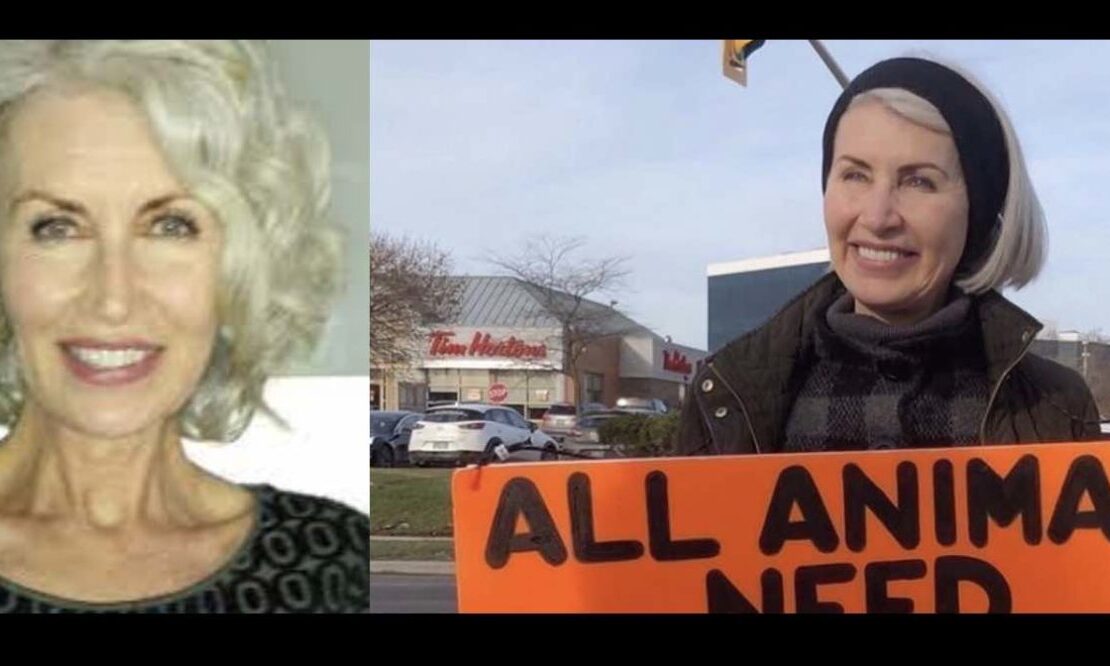 A Year After Her Tragic Dead, Vegans Around the World Remember Regan Russell

A year has passed, and the memory is still fresh. On Friday, June 19, 2020, the Canadian animal rights activist Regan Russell was killed during a vigil outside of a pig slaughterhouse in Ontario, Canada. The case has garnered global attention with two documentaries already produced on the case: There Was a Killing from famed Earthlings filmmaker Shaun Monson and an in-depth investigation by Now This!

The Hamilton-born 65-year-old was struck by a truck packed with pigs going to slaughter. As is the custom during these peaceful vigils, the demonstrators try to give water and offer a loving goodbye to the animals who are inside the trucks headed to their execution.  These vigils are carefully organized by Toronto Pig Save. When, after a few minutes pause, the trucker resumed driving and turned towards the slaughterhouse entrance, Regan was hit. To the dismay of her family and friends, police only charged the driver with careless driving causing death. A year later, activists all around the world are remembering Regan Russell, and her dedication to animal protection. She is a martyr for the cause of compassion to all beings, including pigs.

Watch One of the Dozens of Memorials Globally for Regan! This is in LA!

Her esteemed colleagues from the international organization Animal Save Movement, which recently celebrated its tenth anniversary, have been gathering for vigils in the US, Canada, Israel, New Zealand, India, Colombia, Australia, the Netherlands, and elsewhere. This time, they are not only expressing deep sorrow for the senseless slaughter of billions of animals killed by the animal agriculture industry. This time they also grieve for Regan. The above video was shot by JaneUnChained contributor Cesar Asebedo, with the help of Ellen Dent of the Animal Alliance Network.

When Regan was 24 years old, she participated in her first protest outside a government building in Winnipeg against seal culling. That was the beginning of her more than four decades of animal activism. In 1985, after reading Peter Singer’s Animal Liberation: A New Ethics for Our Treatment of Animals, she started her journey towards veganism. She eventually joined Toronto Pig Save and was a regular participant in its weekly vigils. Truly embracing the intersectional approach, Reagan was also a supporter of the Black Lives Matter movement and women’s rights. In 2017 she and her partner Mark Powell disrupted a Bill Cosby event with t-shirts that read We Believe the Women. She has now become an inspiration for many new activists, and her death has inspired a growing number of vigils in multiple countries.

A former Mrs. Canada, the statuesque Regan worked as a professional model for many years. She also served as an educator in public schools with the SPCA’s Kindness Club and regularly brought feral cats to the SPCA, paying for their spaying and neutering. Every year Regan stormed the fences as part of an annual protest at the Marineland amusement park in Niagara Falls.

Joaquin Phoenix, the academy award-winning actor who has been vegan since he was three years old, said the following about Regan:

“While her tragic death has brought upon deep sorrow in the Animal Save community, we will honor her memory by vigorously confronting the cruelties she fought so hard to prevent by marching with Black Lives, protecting Indigenous rights, fighting for LGBTQ equality, and living a compassionate vegan life.” – Joaquin Phoenix, actor

In 2015, police charged Anita Krajnc, the founder of the Animal Save Movement, for giving water to pigs in a truck taking them to slaughter at the now infamous pig processing plant in Burlington. Krajnc and her legal team brilliantly used the case to put animal agriculture on trial. A judge found her not guilty in 2017.  In the wake of this outcome, in 2019 Ontario’s Agriculture Minister Ernie Hardeman proposed the notorious Food Supply Protection Act (Bill 156). He claimed it would help to ensure the “biosecurity” of the province’s food while still allowing “appropriate” protests.

This Act, which was passed just the day before Regan’s death, restricts interactions between the general public and any part of the animal agriculture industry. Fines for trespassing or obstructing vehicles carrying animals range from $15,000 for a first offense to $25,000 for subsequent offenses. Essentially, it is an ag-gag law targeting demonstrations such as the vigils organized by the Animal Save Movement.

Regan was certainly one of many who spoke out against the Act, and she was doing so that sad day when she was killed. The Act has not managed to stop the vigils because mourning activists have been determined to continue them. But, some have wondered if it emboldened truck drivers who resent the vigils or made them more careless in the midst of the vigils.  Canadians should repeal this Act. It doesn’t help anyone, and who knows if it may have contributed to Regan’s death.

Remembering Regan Russell Around the World

This week, hundreds of people have been remembering Regan Russell all over the world. More than 60 worldwide vigils and memorials have marked the first anniversary of her death. On the 18th of June, 2021, activists from the groups Los Angeles Animal Save and Animal Alliance Network gathered at a freeway in downtown Los Angeles. They dropped a banner for Regan Russell and the recent documentary Seaspiracy.

On Saturday, June 19th, JaneUnchained News was present at the Burlington Candlelight vigil for Regan near the site of her untimely death. JaneUnChained contributor Ray Kowalchuk spent hours going live and videotaping. During the day, next to banners showing the hashtag #GoVegan4Regan, many speakers and music performers formed part of an early commemorative event.  In Hamilton, outside the home where Regan lived, her family also organized a memorial.

Mark Powell, Regan’s partner, thanked the community for its support. He said:

“Regan has been recognized around the globe. And her efforts in animal welfare will not go forgotten. And, I will be standing where she can no longer. From here to my last breath.” – Mark Powell, Regan’s partner

Good Ways of Remembering Regan Russell You Could Try

To celebrate her lifelong dedication to ending systemic oppression, people can now help through the Regan Russell fundraiser. It aims to raise $15,000 for 19 animal sanctuaries in Ontario. Donating to this fund would certainly be a good way of remembering Regan Russell. As the selfless caring person she was, I think she would love it.

Also, director Shaun Monson has produced a new music video with an excellent song created by songwriter and singer Barbara Helen. Its title is: One Voice, for Regan.  You can help by sharing the video across your social media platforms, and reaching out to influencers, celebrities and mass media asking them to upload and play it. Here it is.

Regan once said regarding her protests: “I don’t know if it does any good. But I know doing nothing does no good.”  I definitively know something people can do that can be very good for the animals, humans and the planet. People can become vegan, as she did. That would be the best gift for her. Seeing the world turning vegan.  #GoVegan4Regan