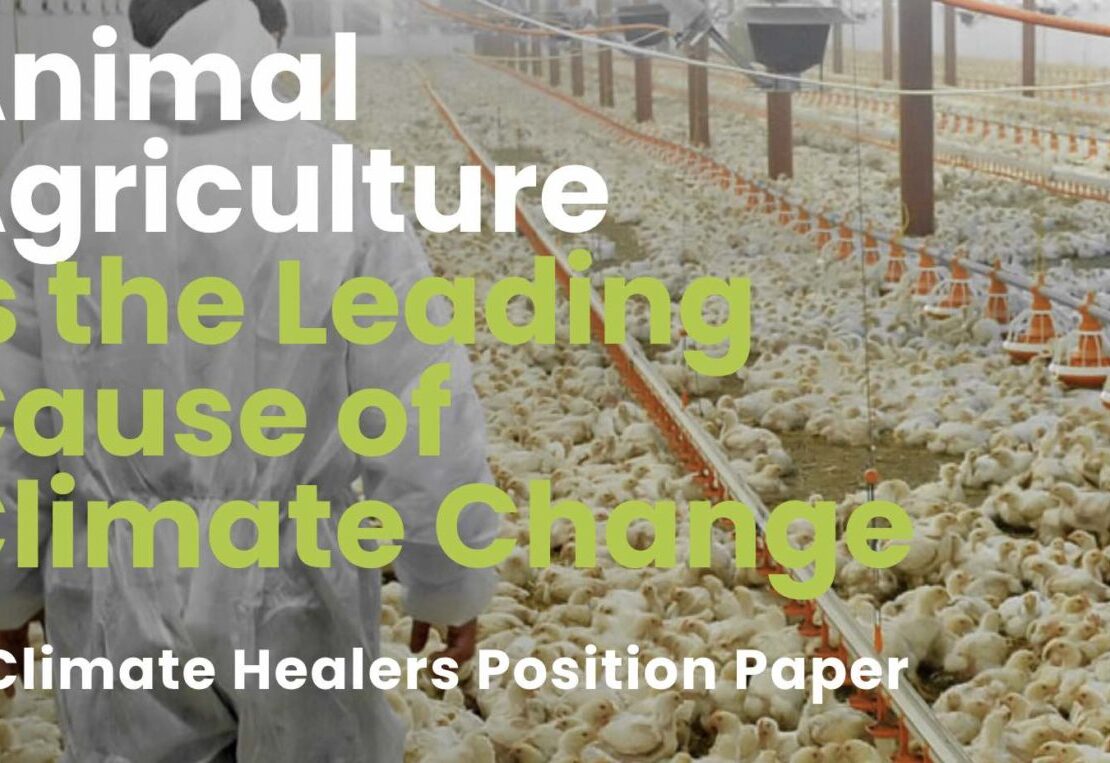 “If eliminating greenhouse gases are so important to us, why aren’t we addressing animal agriculture, which accounts for 87% of greenhouse gas emissions?”  The question came from a frustrated, young, vegan activist speaking into a bullhorn at one of the many climate protests where the role of animal agriculture in global warming was completely ignored.

Wait a second? Did she just say 87% of greenhouse gas emissions are caused by animal agriculture? That means meat and dairy consumption is the leading cause of our climate crisis!

Now, for the first time, the news media is starting to report on this staggering figure: 87% of greenhouse gases are caused by animal agriculture.

The stunning headline appeared in PlantBasedNews on January 5th, 2021. This popular and award-winning media outlet, based in London, has taken the courageous leap and reported the results of a new, deeply researched position paper that warns that ignoring animal agriculture’s role as the primary cause of greenhouse gas emissions could lead to a doomsday climate scenario.

The new white paper is entitled, “Animal Agriculture is the Leading Cause of Climate Change.”  It was written by Dr. Sailesh Rao, a Stanford-educated engineer and systems analyst who once worked on climate change with Al Gore and previously spent decades in the tech world helping to accelerate Internet speeds. Dr. Rao is the founder of Climate Healers and is an executive producer of several highly acclaimed documentaries, including  Cowspiracy and What the Health. He is also the star of Countdown to Year Zero, JaneUnChained’s award-winning documentary on animal agriculture’s devastating impact on the planet. You can watch it on Amazon’s Prime Video.

It Takes Courage to Report the REALLY Inconvenient Truth

Why is it courageous to report on this new conclusion? Well, the thoroughly researched contention that animal agriculture is the leading cause of climate change is being completely ignored by the powers that be who run the world’s major media outlets.

In a 2018 article, entitled “The Meat Question, By the Numbers” The New York Times climate team reported:  “Worldwide, livestock accounts for between 14.5 percent and 18 percent of human-induced greenhouse gas emissions.” That parallels a 2006 conclusion by the United Nations Food and Agriculture Organization (FAO) which published a global study entitled “Livestock’s Long Shadow.” It stated that livestock was contributing 18 percent to the world’s greenhouse gas emissions.

But, later, in 2009, a Worldwatch Institute report concluded that livestock actually accounts for at least 51 percent of annual worldwide greenhouse gas emissions.

So, which is it: 14.5 to 18%, 51% or 87%, as Dr. Rao’s paper reports? The definitive answer to this question could determine whether the human race survives climate change. It is perhaps the most crucial question of our lifetimes.

Dancing around the Truth

It’s interesting that the New York Times seems to be grappling with how much to report on this crucial subject. An article entitled “Cutting Greenhouse Gases From Food Production Is Urgent, Scientists Say” was originally published on Nov. 5th, 2020, and then updated on Jan. 12, 2021. The article acknowledges that crucial climate change goals “could be achieved through ‘rapid and ambitious’ changes to the global food system over the next several decades, including adopting plant-rich diets…”  But, it refers to a report that admittedly fails to even consider switching to a global plant-based culture, calling such a goal unrealistic.

Well, if it saves the planet, is it really that unrealistic? Is it not presumptuous to assume that a vegan world is impossible?

The White Paper The World Needs to Read

Dr. Rao’s white paper, which is available for anyone to read, makes a powerful case that the United Nations has woefully underestimated the impact of animal agriculture on greenhouse gas emissions through faulty calculations.  Says Dr. Rao’s paper, “We identify four miscalculations in the United Nations (UN) Intergovernmental Panel on Climate Change (IPCC) reports, which cause a systematic under-estimation of the impact of animal agriculture on climate change.”

“The IPCC underestimates the impact of methane gas by using a timeframe of 100 years. This ignores the fact that methane decays into less harmful CO2 with a half-life of 8.4 years. By stretching methane’s impact over an entire century, the IPCC is diluting the global warming damage methane does on an annual basis, compared to C02. This is like eating a whole cake in one day, each and every Sunday, and then calculating the impact it would have on our body as if we ate it over the course of a year.” Dr. Rao’s White Paper

Dr. Rao’s white paper states, “While humans have been burning fossil fuels for over 200 years, we have been burning down forests for animal agriculture for well over 8,000 years.” A huge percentage of the world’s forests have been destroyed to create grazing land for cattle and farmland to grow crops to feed farm animals. Trees absorb carbon dioxide.

So, when you destroy forests, you destroy the world’s ability to absorb or sequester carbon, a heat-trapping gas. That’s a huge contributor to global warming. Unfortunately, the way animal agriculture’s impact on climate change is currently described is mostly limited to methane production through cow belching and farts. In other words, it’s dismissed and overlooked.

The white paper cites numerous peer-reviewed scientific sources. Dr. Rao has also offered to debate anyone from any scientific and/or environmental organization who wishes to challenge his conclusions. Nobody’s come forward yet. It’s an open invitation.

So, if Dr. Rao is correct, the current efforts to contain and reverse global warming are deeply flawed and pointing at the wrong main culprit.  The paper warns, “We show that we need to transition to a global plant-based economy first… blindly eliminating fossil fuel usage will accelerate the warming of the planet.”

So, which newspaper or TV news outlet will be the next journalistic organization to report on this explosive white paper? The very least journalists can do is read the white paper and consider its implications. To simply ignore it is an abrogation of journalistic responsibility. This is the really inconvenient truth. If Dr. Rao is right, and he makes a compelling, scientific case, then we – as a human species – are in deep trouble.