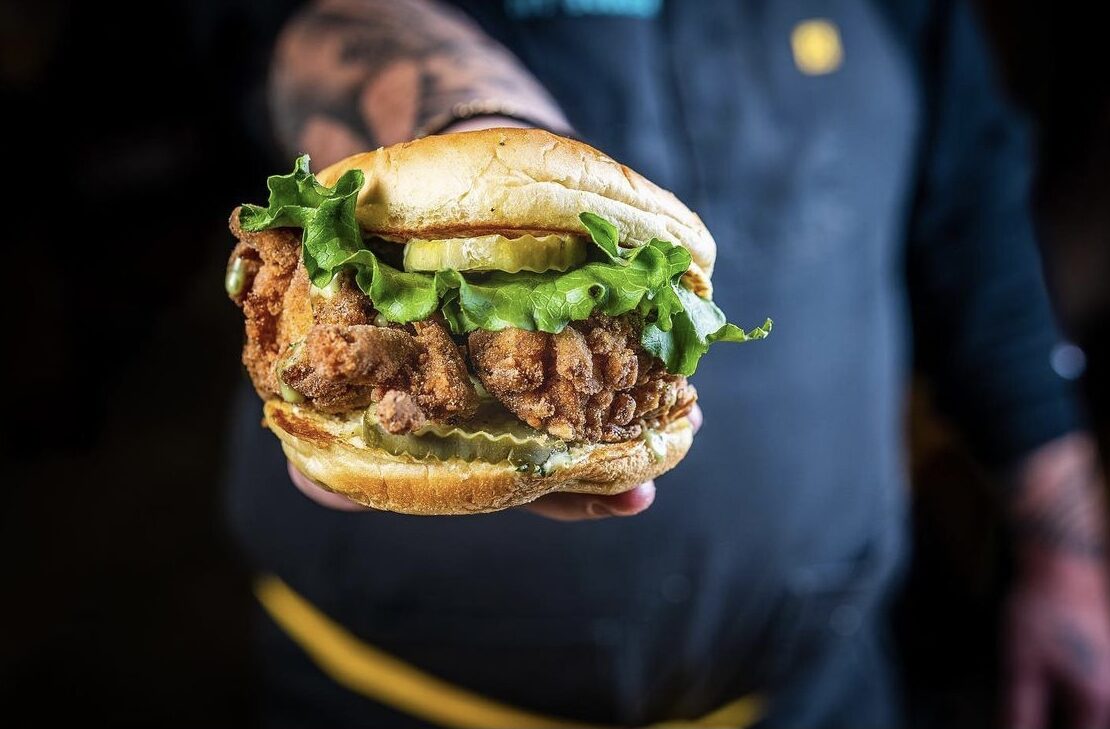 PLNT Burger is a quick-service, vegan fast food restaurant concept dedicated to crafting and redefining some of America’s favorite foods. With a focus on juicy, indulgent burgers, soft-serve, savory snacks, and seasonal salads, their mission is to give people the ability to Eat The Change with delicious foods they love and crave. PLNT Burger offerings are free of any animal products, without compromising flavor or experience.

Let’s check out the most planet-friendly burger, the Chick n’ Funguy PLNT Burger, revealed on #LunchBreakLIVE! This “NO WASTE” mushroom sandwich, their “chicken” sandwich, is made from the piece of the mushroom that is usually tossed! It’s Earth Month so let’s discuss sustainability and reducing our carbon footprint by what we eat! Learn all about PLNT Burger’s earth-friendly products and how they promote their motto: Eat the Change You Wish to See in the World! Celebrity Chef Spike Mendelsohn and Jonah Goldman, Director of Strategic Marketing of PLNT Burger, bring this sandwich to life! Let’s take a look…

VEGAN FAST FOOD FOR THE PLANET

The best way to address the growing climate crisis is to choose vegan. Celebrity chef Spike Mendelsohn and the team at PLNT Burger are on a mission to create the best burgers on the planet and for the planet with their menu of chef-crafted, 100% plant-based food offerings.  Their menu is so mouth-wateringly delicious and is perfect for grubbing on Earth Day and every day because every day is Earth Day…am I right?!  Without the planet, we’ve got nothing.

Its first location was a restaurant kiosk inside the Whole Foods Market in downtown Silver Spring, MD.   PLNT Burger quickly expanded to 7 locations across the DMV and PA where they serve plant-based foods that are far more sustainable, leaving much less of a carbon footprint.  “I like to say every day is Earth Day at PLNT Burger,” said Chef Spike Mendelsohn who was inspired to create a vegan burger for his vegan wife, Cody Mendeloshn. “I was blown away by the incredible taste and texture of the Beyond Meat Patties and knew people like my wife, or even carnivores or flexitarians who want to reduce their carbon footprint, needed more options. Considering Americans eat more than 50 billion burgers a year, there was clearly a huge opportunity for us to create a restaurant that would change the way people looked at veggie burgers.”

“Our PLNT Burger Patty requires 99% less water, 93% less land, and generates 90% fewer emissions compared to an animal-based burger,” said Ben Kaplan, CEO of PLNT Burger. “We have also used the part of a mushroom that is typically composted to create our Chik N’ Funguy Sandwiches because we believe in food innovation that works for the planet, not against it.”

EVERYONE LOVES A LITTLE VEGAN FAST FOOD NOW AND AGAIN

Who doesn’t love a good outing for some vegan fast food?  We all crave a good burger and fries sometimes, and with plant-based options as delicious as those offered at PLNT Burger, why not choose vegan?  It’s overall better for your health, the planet, and the animals.  Just look at these amazing vegan options offered at PLNT BURGER.

THANKS FOR JOINING US ON THIS EARTH DAY ADVENTURE

PLNT Burger is definitely doing their part in reducing their carbon footprint through the food they serve, and offering a way for the public to do the same by choosing delicious crave-worthy vegan fast food options.  I hope you have the opportunity to visit and taste some of their burgers.  If you are looking for other popular vegan restaurants to try, be sure to stop by our vegan restaurant’s page for a number of options.  Until next time…keep cookin’!