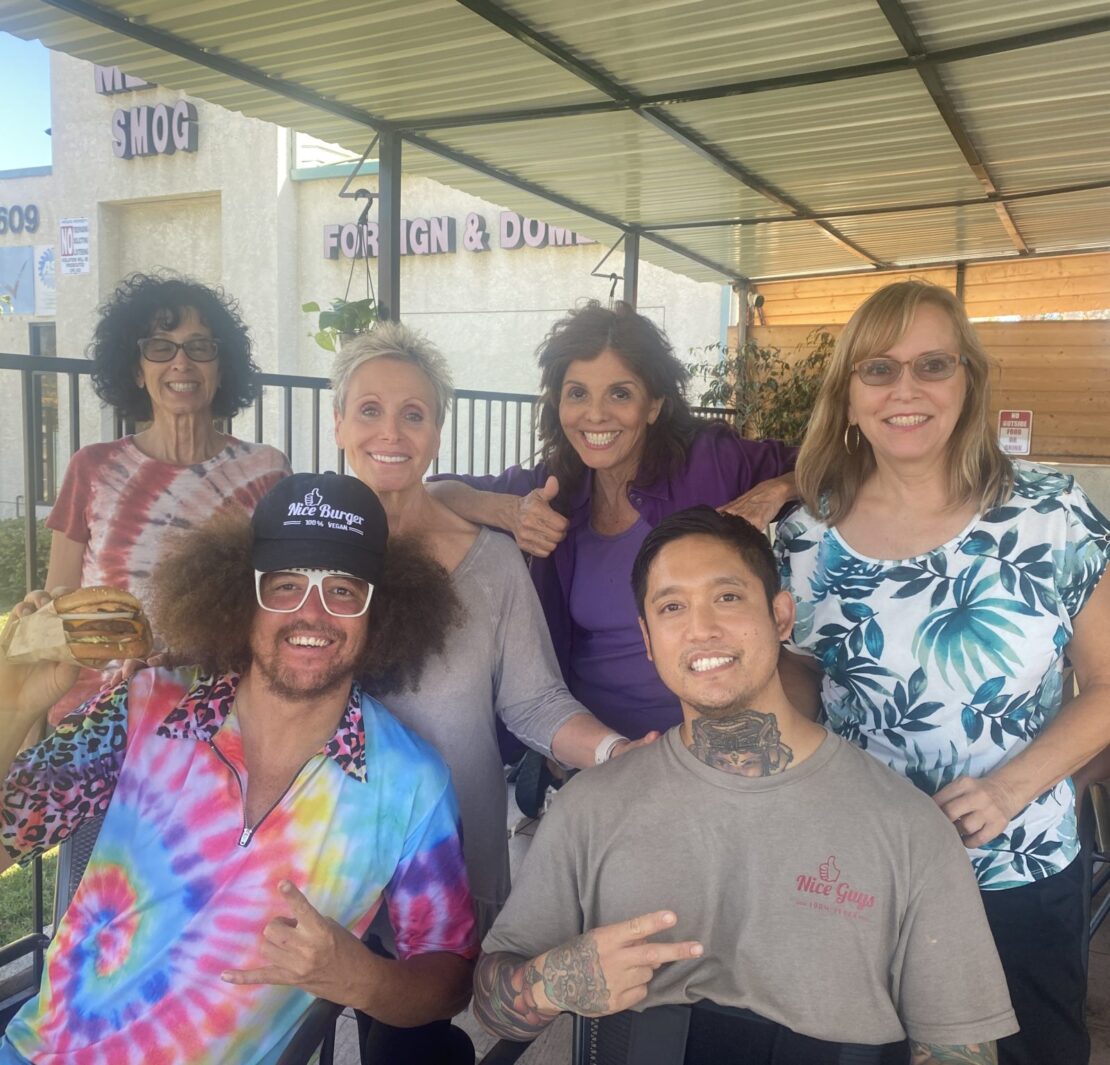 VEGAN FAST FOOD, I’M SEXY AND I KNOW IT!

You never know who you’ll shuffle into at a vegan fast food restaurant or any plant-based restaurant!  JaneUnChained.com’s #LunchBreakLIVE crew had the fun honor of bumping into Redfoo at Nice Guys 100% Vegan in Costa Mesa, Ca.  You may remember the wildly popular song “Sexy and I Know It.”  Yup, that sexy guy shaking it is Redfoo from the group LMFAO!  Guess what, he’s vegan and he knows it!

We immediately needed LMFAO’s famous party anthem, cause a party broke out. Click here to see RedFoo videotaping us for his Instagram account, where he has more than half a million followers!

We learned that the vegan singer/rapper/dancer/songwriter is also a competitive tennis player (he works out), and a passionate animal lover and has adopted several farmed animals!  Redfoo is also an accomplished vegan chef! It was fascinating to learn that this charismatic, yet down-to-earth,  pop star is the son of the legendary music impresario Berry Gordy Jr, the founder of Motown Records. Wow! No wonder Redfoo knows how to shake that body to the beat.

Watch the #LunchBreakLIVE video below, and see the incredible burgers, fries, and other yumminess offered by Nice Guys 100% Vegan in Costa Mesa, a fave post-tennis dining spot for Redfoo. The plant-based burgers, shakes and soft-serve here ARE SO INCREDIBLE they will make YOU wanna shake that body.

LOOK AT THE VEGAN BURGERS, SHAKES & FRIES BELOW!

You can customize any of Nice Guys burgers! One of their favorites is adding guacamole and jalapeños to their VEGAN BBQ “Bacon” Cheeseburger for an extra tasty southwest flavor!  Check it out…

If you aren’t a vegan burger kinda person you can choose one of their vegan chicken sandwich choices.  They are just as scrumptious.  They also have vegan chicken strips!

Don’t forget the fries!  There are numerous variations of fries offered at this restaurant, some smothered in sauces and toppings, others just plain with some dipping sauce.  The choices are many!

The Costa Mesa location also serves breakfast for all you plant-based early birds, so go grab yourself a Spammy Egg N Cheese sandwich!  You won’t regret it.  The flavor is off the charts delicious!

Stay cool all summer long with one of Nice Guys milkshakes! Made with their in-house soft-serve ice cream, oat milk, and soy milk.  Available in vanilla, chocolate, malt, & strawberry.  So much yum!

Nice Guys 100% Vegan, located in Southern California, is proud to be the home of Orange County’s First 100% Vegan Charbroiled Burgers. They strive to provide deliciously satisfying and wholesomely familiar plant-based meals in a friendly fast-casual environment. And in our opinion, they have succeeded.

This was an exceptionally fun episode of #LunchBreakLIVE with the surprise appearance of the super talented and popular Redfoo!  Together the whole gang enjoyed the most incredible burgers your mind can imagine!  Please be sure to check out Nice Guys 100% Vegan, you will fall in love with the pure comfort in every bite.  You can find them at:

VISIT THEIR SANTA ANA LOCATION TOO!

Be sure to stop by the #LunchBreakLIVE page if you want to try some delicious and easy vegan recipes to cook up at home, we have a ton to choose from.  Until next time…