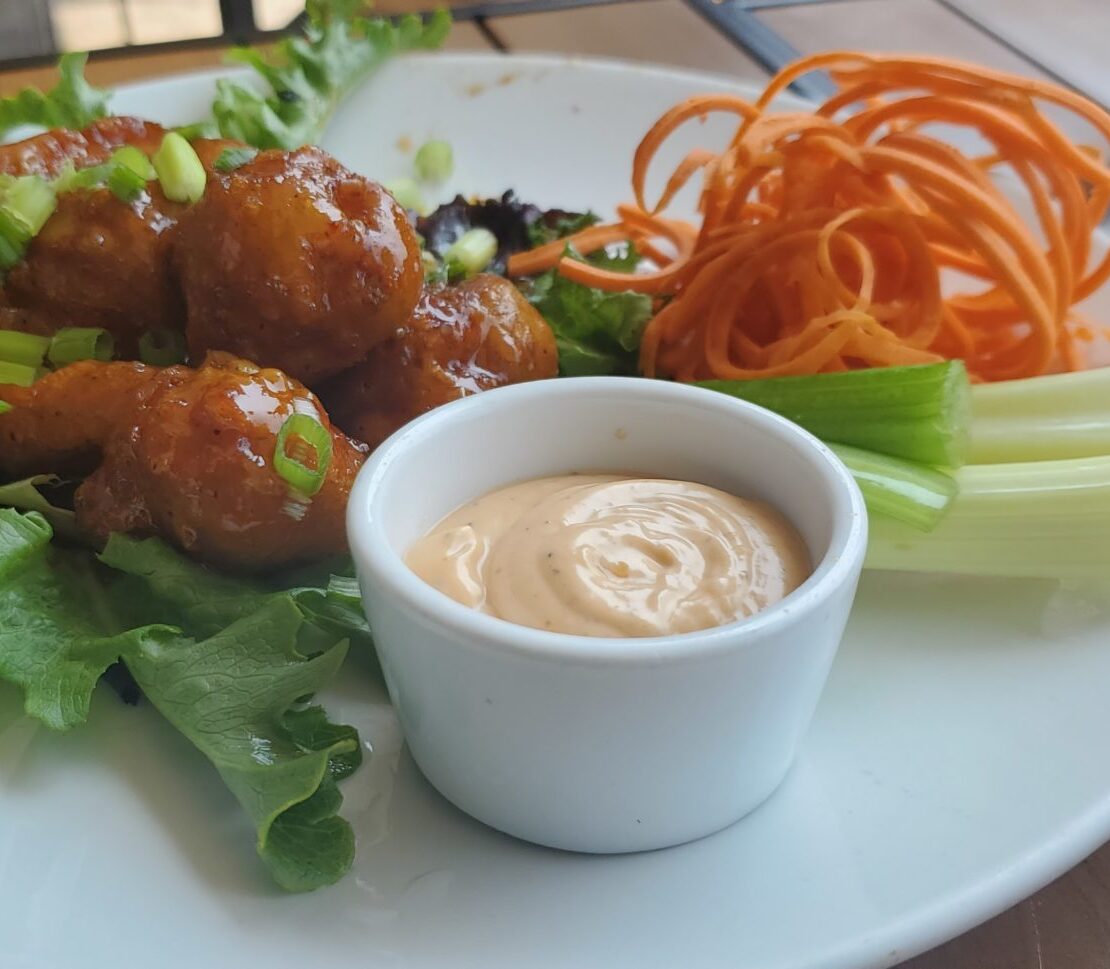 Vegan restaurants are everywhere in Los Angeles. This newest find offers exquisite plant-based cuisine!  It was the site of #LunchBreakLIVE with Jane Velez-Mitchell, New York Times bestselling author and founder of #JaneUnChainedNews & Kim Delgado with Vegan Outreach, also a #JaneUnChained contributor. These two vegan foodies feasted at the exquisite Variable Cafe.  This new vegan heaven is located in Marina Del Rey, California just blocks from the beach.  The exact address is: 13350 West Washington Blvd, Los Angeles, 90066, just east of Lincoln Blvd.  Check out what Jane and Kim chose to order.

I read the vision and motto of the variable cafe and I think it is so perfect I want to share it with you, word for word.  From the owners, Plern and Joel:

“THE VARIABLE CAFE IS BASED ON CHANGE. THE NAME ALONE DERIVES FROM IT.

BE THE VARIABLE. BE THE CHANGE.

WE WANT TO DISRUPT THE CONSCIOUSNESS THAT IS ASSOCIATED WITH VEGAN CUISINE.

WE WERE NOT VEGAN FOR MANY YEARS. BEFORE A FEW YEARS AGO WHEN A DEMAND FOR A CHANGE IN DIET BECAME NECESSARY. WE NEEDED TO CHANGE QUICKLY. WE DECIDED THE VARIABLE OF EATING PLANT-BASED AND THEN TO VEGAN WAS THE ANSWER TO THE EQUATION.

HUMANS ARE EXTREMELY CAPABLE OF ADAPTING.

ALONG THE WAY WE ADAPTED TO OUR DIET. WE FOUND THE NEW INGREDIENTS TO BE EXCITING TO EXPERIMENT WITH. RECREATING STAPLE DISHES OF OUR PREVIOUS EATING HABITS WITH

“WE FOUND IT NOT ONLY TO BE REALLY FUN TRYING TO RECREATE DISHES BUT  OFTEN FINDING IT WAS ACTUALLY EVEN BETTER.

A LIGHTBULB WENT OFF FOR BOTH OF US.

“LET’S TRY TO MAKE A RESTAURANT THAT PERPLEXES EVEN THE STRONGEST OPPOSITION TO A VEGAN DIET.

Jane is on a relentless mission to find the BEST vegan restaurants and cafes in Los Angeles, and she’s quite successful at it.  She was super excited to try the new Variable Cafe, and after looking at the food photos, I can see why.  It is eclectic food with a variety of ethnic themes, and it also has a health bar. The menu is a good size with dishes that are delicious and beautiful.  JaneUnChained contributor Kim Delgado King and Jane ordered several different menu items, to show us some of the options.  Notice the names of the dishes, they are so creative.

OTHER OPTIONS AT THIS NEW VEGAN RESTAURANT IN LOS ANGELES

Jane and Kim made some clever menu choices at The Variable Cafe, although there are no bad choices at this flavorful spot.  However, I want to show you a few other options on the menu, so you can continue to drool over this incredible food. If you are in Los Angeles, be sure to stop by The Variable Cafe in Marina Del Rey.  Again, you can find them at:

If you want to try and cook some delicious easy vegan recipes at home, be sure to stop by the #LunchBreakLIVE page, where we have a ton to choose from.  Until next time…