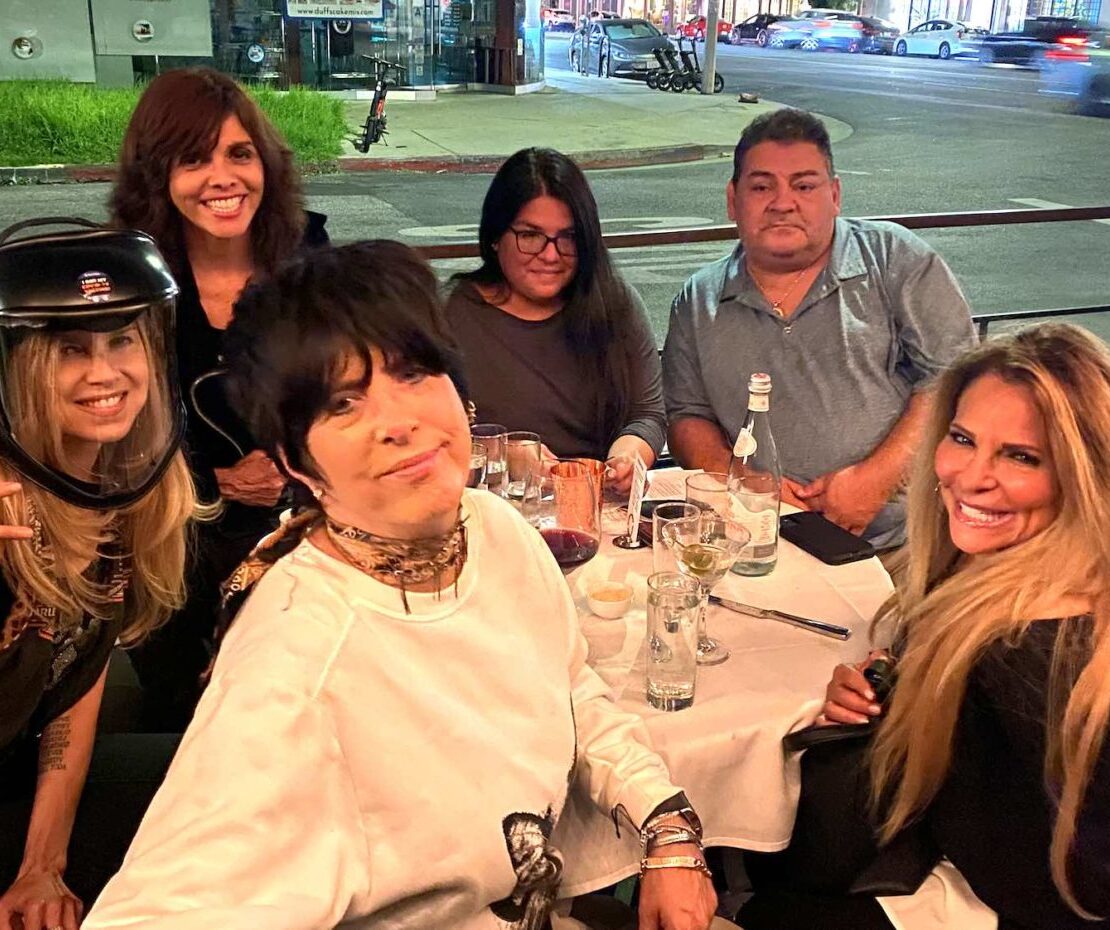 Read this riveting, blow by blow, insider account by Simone Reyes (vegan activist, country singer and animal rescuer) of how she and songwriter Diane Warren rescued 2 escaped cows and got them to a safe home at Farm Sanctuary in June of 2021.

Unknown to the public, at 7:30 pm, a herd of about 42 cows who were awaiting slaughter at Manning Beef in Pico Rivera made a bid for freedom.  With a gate mistakenly left open, a race for life began.  Cows are historically good escapees which proves how intelligent they are.  They are gentle and extremely social animals. Studies have told us that they have the ability to recognize more than 100 other cows.  They are known to form close friendships with members of their herd and researchers have reported that cows grieve when their friends or family members die. I have seen this firsthand and know this to be true. 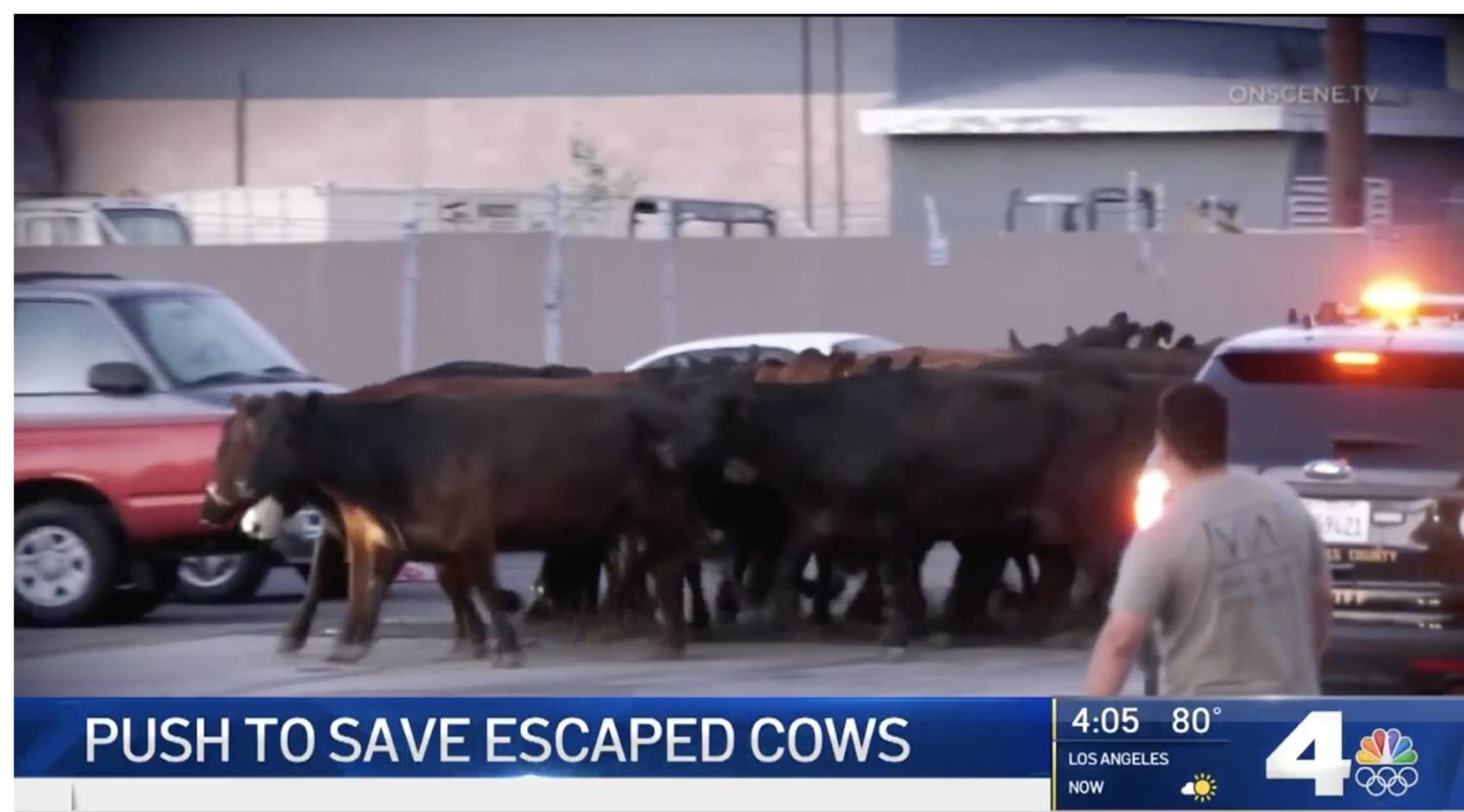 Eyewitness videos began to flood social media.  That was quickly followed by TV news crews, in vehicles and  helicopters. Soon about 20 of the escaped cows were corralled into a cul-de-sac on the 8700 block of Friendship Avenue about half a mile north of Beverly Boulevard. But as the cows were being loaded into trailers, seemingly knowing their ultimate fate, three cows escaped the cul-de-sac and led deputies on a pursuit across town. They could be seen running alongside vehicles in the area of Beverly and Rosemead boulevards.’

Videos of the cows running for their lives were splashed across screens all over Los Angeles and the nation. People took to social media to cheer the cows on.  It seemed that every post was in favor of those cows getting away.  People worried for the cows’ safety and rightfully so.  One terrified and stressed cow, after apparently charging a family, was horrifically shot by law enforcement.  Soon after,  one lone cow was shown on video footage sprawled alone in the middle of the road some distance from the others, near a pool of blood.  Reports soon began to trickle in that most of the cows had been rounded up and returned to Manning Beef slaughterhouse. Most… but possibly not all.

My phone began to ring off the hook.  Activist friends began to mobilize, some hooking up their own trailers to search for any missing cows on their own, others calling haulers and paying them to search Pico Rivera to get any cow that might still be on the loose. My friend, the amazing animal activist Ellen Dent from Animal Alliance Network, drove herself down to the area hoping for a spotting, but the scene was chaotic with police cars blocking most intersections.  Activists searched in cars, in trailers, on foot and along backroads, combing the area until 6 am. But no more cows were found.  Still, we had hope.

June 23 – The Morning After the Escape

At the crack of dawn, my phone began blowing up with panicked texts that all said basically the same thing: “We have to save these cows. They can’t die!!!”  This had become a national and even global news story and every animal rights activist I knew was invested in saving these cows.  Not surprisingly,  many of  people urgently posting about saving these cows had meat in their freezers and had previously seen no issue with sitting down to dinner with a burger or a steak. But, seeing these panicked cows running down the streets of Pico Rivera in a desperate bid to live… that had an impact on them. People watching the drama unfold couldn’t help but make the connection that animals are sentient beings with the capacity to feel every emotion we do.

Then, News Reports That One Cow Was… MISSING

I had five different threads on my cell. One was with LA Animal Save’s Amy Jean Davis, Animal Alliance Network’s Ellen Dent and JaneUnchainedNews’ Jane Velez Mitchell. Another was with some of Diane Warren’s team, Denise Martell, Leah Sydney and then Diane Warren herself. The award-winning songwriter is a vegan and fierce animal activist.  Activists were texting me suggestions on how best to negotiate getting the recaptured cows out of the slaughter pens. Nearby animal sanctuaries began preparing to take in cows in case of a miracle.

Then, the news reported that Anthony DiMaria, the owner of Manning Beef slaughterhouse, had been injured during the round up and had to be rushed to the hospital.  One of the cows who’d escaped from Anthony’s killing facility charged him during the recapture.

I originally met Anthony when I joined Kat Von D, Earthlings filmmaker Shaun Monson, Amy Jean Davis, Russell Simmons, and others, for a meeting at Manning slaughterhouse.  We had forged an unlikely friendship that opened my eyes to the realization that, if we lead with love and compassion, others will meet us there.  Anthony has allowed activists in the past, such as actor Joaquin Phoenix, to save animals from his slaughterhouse and I have found in him spurts of generosity typically unheard of with other businessmen in his line of work.  While I can never accept any animal being killed for any reason, I am grateful that Anthony has released cows (and some babies) to me and others.  Any life we can get out of the slaughterhouse is a huge victory. It means everything to that animal.

We were concerned when we heard he had been hurt and checked in on him.  His injuries were serious and painful and yet he still responded to our texts between surgery and the subsequent hospitalization.  The next response would answer one of our prayers.

I connected Diane Warren and Anthony and within minutes a deal had been struck.  Diane Warren has written the most important and beautifully moving (and popular) songs in history but there was no greater sound than the ding of the text from her that gave us the news we were all waiting for: the missing cow was not only located but captured safely and had now been given to the city of Pico Rivera to be granted sanctuary! She was now ours.  I was asked to handle the details which would take all day and go on into the night.

I called my pal Michelle Cho and Farm Sanctuary’s founder Gene Baur who both connected me to Ashley and Marie at Farm Sanctuary who all were rockstars from start to finish. Within minutes a home had been secured for this exceptionally blessed cow.  Here is Farm Sanctuary’s account of the dramatic events.

I was elated.  My activist community celebrated all night, most with tears of joy and relief.

Manning Beef, Pico Rivera’s wonderful City Manager John Carmona (a truly compassionate city official who wanted the best outcome for the cows) and checking in on Farm Sanctuary, making sure they had all the contact numbers they needed to get the red tape sorted out from Manning.  It took all day but, by the end of it, we knew this one cow was going to have a life fit for a queen.

Then, the blow came that all the other cows had been slaughtered.  It truly broke the nation’s hearts.  We didn’t save them all, despite many sanctuaries offering to take them in.  It cut deep.  But, we had to keep our eye on the cow we had. She was alive and she was waiting.

Within days, Farm Sanctuary had picked up the lucky girl and filmed her wide eyes looking out fearfully through the slots of the truck and then stepping off the trailer into her new life.  Understandably, she was stressed and terrified of humans.  She faced a 30-day quarantine for safety and then the plan was to integrate her into the herd. This is a herd that holds cows I’ve had the honor of getting into Farm Sanctuary! These rescues will forever go down as some of the proudest moments of my life.

Photos of the fortunate survivor cow, now named June B Free (a name that came from Diane Warren and a long time Farm Sanctuary supporter) began to hit my phone.  June looked absolutely regal: a true survivor.  The sun delicately bathing her body, a body that would have been cut up and served between a hamburger bun if not for her gift of freedom.

And Then There Were Two

June B Free had a beautiful big pasture, but – in quarantine- she was alone.  No other cow to comfort her, to grieve with her.  But her life was about to change a week later.  A miracle was in progress but none of us knew it yet.

Almost a week to the day, news reports began circulating that there were multiple sightings of another free-roaming cow from the Pico Rivera 42!

Apparently, about 12 miles from the slaughterhouse,  a black cow had been roaming in a park. Then, my phone rang and it was Anthony.  He was at Manning Beef and informed me that the lone holdout cow had just been captured and was back at Manning. She was thin and dehydrated but alive and ours to save.  I burst into tears and immediately called Farm Sanctuary which jumped at the chance to bring June B Free’s fellow herd member home to her.  After all the paperwork was done, she too was on her freedom ride to her new home.  She doesn’t have a name yet, she will soon, but she doesn’t need one.  She has all she needs- a safe place to call home where she will be recognized as someone not something, a safe haven where nobody will ever harm her. She will live with her newly reunited friend who has  survived the same war.

The expressions on the cows faces as they ran for their lives haunt me.  These are images I can never unsee. And I am not alone.

Millions of people from around the world mourned the loss of The Pico Rivera 42.  So many had so hoped for a different ending for them.  Maybe some of the TV news viewers went plant-based after they saw the determination on the face of the cow who seemed to lead the charge. Maybe that moved them.  Maybe some of them finally saw the face of their meat and found themselves and their diet forever changed. Maybe some of them became like us, animal rights activists. Maybe some found a new calling thanks to a herd of cows, all but two dead now, who told the world in the only way they could that they wanted to live, just like you and me.

To celebrate the two cows who were spared, Anthony generously invited Diane, her BFF Cindy, Jane, Manning’s Breanna and me to dinner at our favorite restaurant: Crossroads Kitchen in West Hollywood.  There we ate amazing vegan food, shared some laughs (and tears)  and talked about a world where all beings could be free.  Watch the video to see the dinner in action!

The 13th-century Persian poet Rumi said, “Somewhere beyond right and wrong there is a garden. I will meet you there.”  On July 7th, 2021, Crossroads was that garden and we met there.  We are forever connected through two cows who, against all odds, will live their birthright – happily ever after.

Below is more discussion and video of this drama, with activists Simone Reyes and Ellen Dent giving us a play by play of the drama.

Potatoes On The Grill, AND Kale!