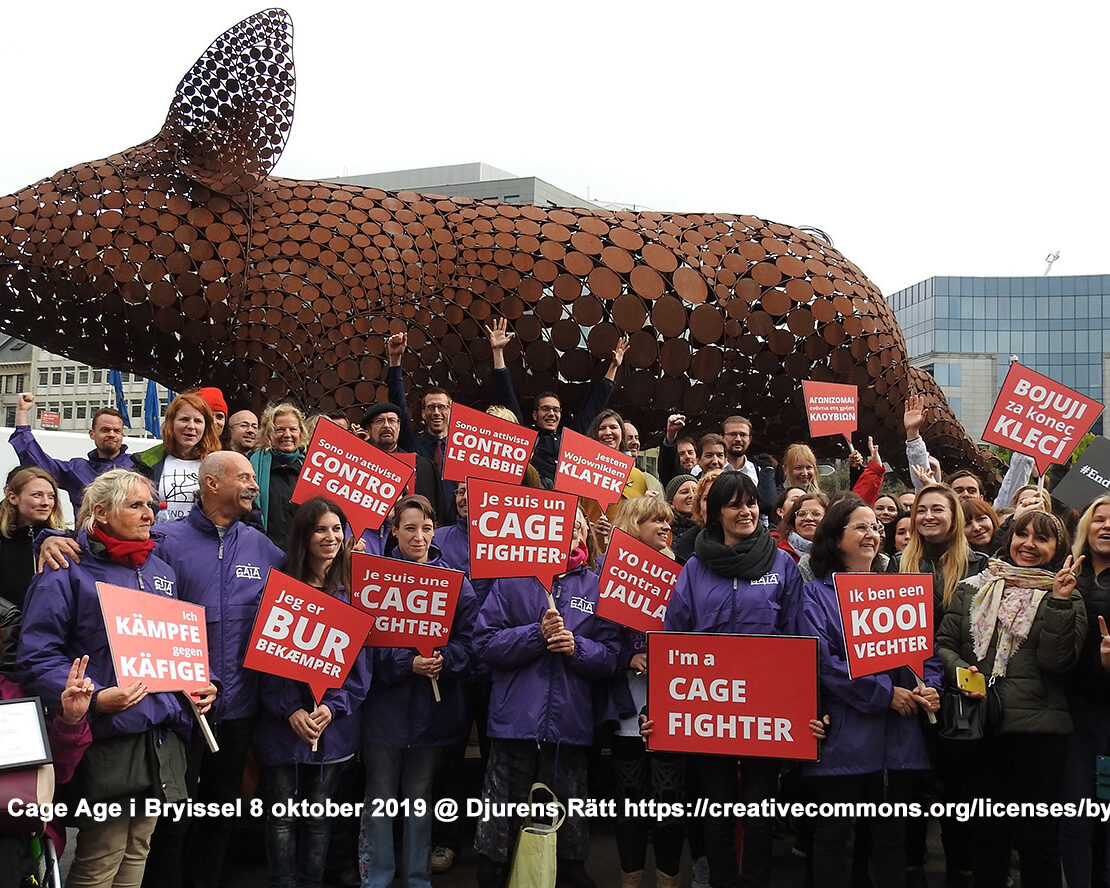 The EU has taken one of the most significant steps to ban cages in animal farming. The European Commission has announced that, by the end of 2023, it will propose legislation to phase out cages. This will affect hens, pigs, calves, rabbits, ducks, geese, and other farmed animals in all EU countries. The deadline will be 2027.

This is a big deal because, from all the EU institutions that need to approve this ban, the European Commission is key. Without their support, even resolutions approved by the EU Parliament may never come to light. The biggest hurdle against a cage ban has now been successfully dealt with.

How Can the EU Ban Cages in European farms?

The EU is an extraordinarily complex multinational institution. It requires a great deal of bureaucracy to guarantee the sovereignty of each member state and ensure that elected representatives of its citizens can make important decisions that affect all their nations.

A series of institutions accomplish this, the most important of which are:

To ban cages in animal farming in the EU, all these institutions must approve this ban, so it takes a long time. However, it is worth the hassle. If they all approve it, this will affect 27 nations, 447 million people, and 300 million farm animals still kept in cages every year. All at once!

The First Step to Ban Cages in Animal Farming: The Citizens

On October 2nd, 2020, a coalition of animal protection organizations submitted to the European Commission 1.4 million validated signatures in support of a cage ban. This was 400,000 more than officially needed for an ECI (European Citizens Initiative).  This is the 6th to succeed among 76 initiatives in the last eight years, and the 1st about farmed animals.

This was the result of a campaign called End the Cage Age European Citizens’ Initiative (ECI). It has been led by Compassion in World Farming EU since  September of 2018. The coalition consists of more than 170 European and international animal protection organizations that pushed for these signatures. It includes groups such as Animal Aid, Animal Equality, Humane Society International, Viva!, Four Paws, World Animal Protection and PETA.

The Second Step to Ban Cages in Animal Farming: The EU Parliament

On June 10th, 2021, the European Parliament passed a ground-breaking resolution urging the European Commission to phase out cruel cage systems in animal farming by 2027. On that day, 558 Members of the European Parliament (MEPs) voted in favor, 37 against, and 85 abstained. They said that alternatives to cage farming exist and are being successfully implemented in several member states. They asked the ban to be based on impact assessment and species-by-species approach.

It went beyond cages. MEPs also called on the Commission to do the following: “put forward proposals to ban the cruel and unnecessary force-feeding of ducks and geese for the production of foie gras.” Organizations such as Animal Equality have conducted many undercover investigations on foie gras farms in Europe over the years. Bans on selling this terrible product of cruelty have already been enacted elsewhere. In 2014, India became the first country in the world to ban the import of foie gras. In the US, California (2011) and New York (2019) have done the same.

As the current Commission leaves office in 2024, any legislation proposed for after that day may not actually progress. However, on June 30th, 2021, EU Health Commissioner Stella Kyriakides, together with Commission Vice-President Věra Jourová, announced their plans to propose legislation before that.

Although there was no mention of foie gras yet, this is what the commission said it would do:

On hearing the news, Olga Kikou, Head of Compassion in World Farming EU, said: “The long-awaited day has finally come! Today, the European Commission made a big step to leave a legacy for animals – those locked in cages as innocent prisoners who have committed no crime. Citizens demanded change and the Commission heard the message loud and clear, making an unequivocal and visionary commitment to phase out cages. It feels like one of these moments in history when the tide is turning. The animal advocacy movement succeeded in rattling the cage and planting the seeds of a new era.”

“From today on, a new journey begins. We will stay focused on the European institutions until they deliver on this ambition and will be vigilant in preventing vested interests from watering it down.” – Olga Kikou, Compassion in World Farming EU

“The Commission’s pledge to end the cruelty of caged farming represents a historic achievement and a key milestone in the fight for a greater recognition of animal rights as well as a step towards the abolition of the most aberrant intensive farming practices, which cause the suffering of hundreds of millions of animals,” European Parliament member Eleanora Evi, a backer of the initiative, said, as reported in the Washington Post.

Compassion in World Farming, an advocacy group, said that moving to end the use of cages was “a massive step towards ending factory farming.”

Broader changes to European farming regulations also could be on the way. Lawmakers set up a special parliamentary committee to investigate animal welfare conditions last year. The committee presented a draft report in late May recommending new animal welfare guidelines and potential sanctions if farmers and companies do not comply with such rules. The draft report will be put to a vote before the end of the year.

Next Step to Ban Farming Cages:  The Council of the European Union

The proposal needs the approval of the European Parliament and the Council of the European Union. The former will be easier because the proposal was a request from Parliament in the first place. The latter, informally known as the Council of Ministers of each member state, will be trickier. This is because the animal agricultural lobbyist of each nation can put a lot of pressure on their governments to reject the proposal.

But the good news is that some of the EU countries are already quite close to be cage-free. For instance, Austria and Luxembourg are already 97% cage-free, followed by Sweden (92%), Germany (86%), The Netherlands (83%), and Belgium (69%). On the other end of the spectrum, we have Malta (1%), Spain (11%) and Portugal (11%). These are countries that could put more resistance and derail the process.

Countries that want to trade animal products with the EU (such as the UK, for instance) may now consider banning cages too. Otherwise, they may not be able to export such products. This may take less time in many countries that do not require such complicated legal processes. The EU-free-cage standards may spread internationally.

Removing cages from the lives of captive farm animals who are still bred and killed for food is by no means the end of their suffering. We still have a long way to go to abolish animal agriculture completely. But, this step brings us closer to banning factory farming, which – in turn – is a logical step towards the total reform of this cruel system and the transition to purely plant-based agriculture.

We may need to free each animal one cage, one enclosure, or one farm at a time. Or… many at the same time with new laws affecting many countries. Whatever it takes, no matter how slowly, we must keep fighting for their freedom from humanity’s cruel subjugation.