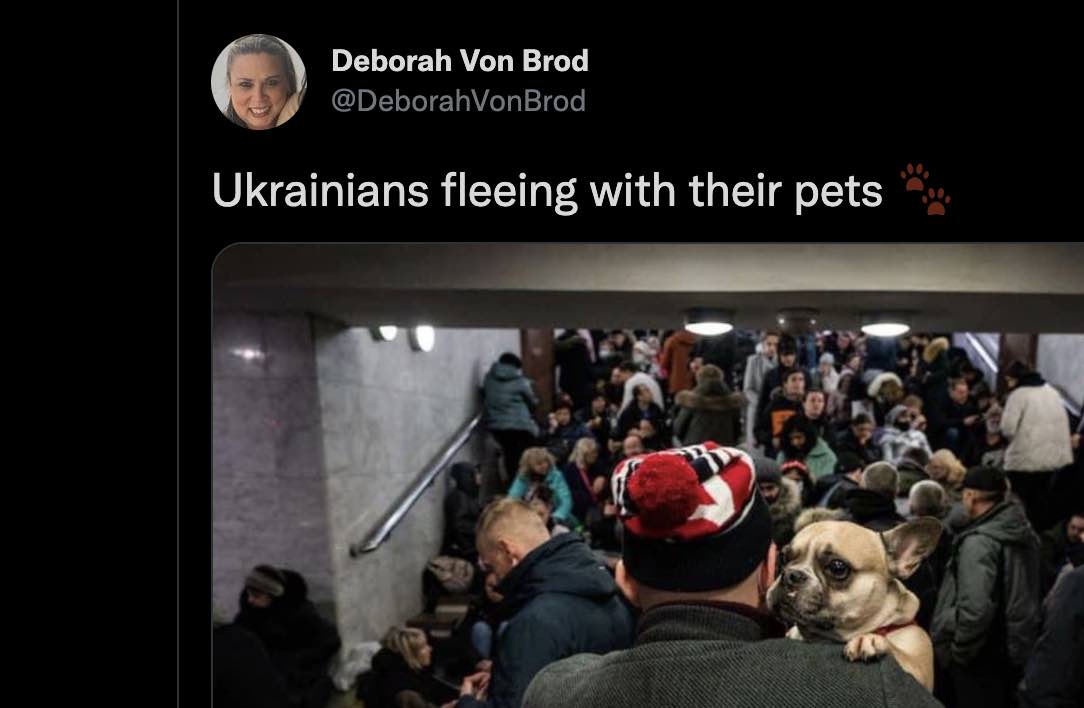 Russia’s invasion has created an animal crisis in Ukraine. Many are fleeing with their companion animals while others have been forced to leave their beloved pets behind to fend for themselves.

As Ukrainians flee the invading Russian army, the resulting animal crisis is mostly overlooked in the chaos enveloping this conflict. PETA Germany reports that many tens of thousands of people, “…with and without animals, are arriving in Poland exhausted and injured. Due to extreme traffic jams, many people are leaving their cars and walking towards the borders with Hungary, Poland, and Romania. PETA Germany plans to get 44,000 pounds of animal food into Ukraine.”  PETA is urging animal lovers to help its efforts by donating to its Global Compassion Fund by clicking here.

The world’s most powerful animal rights organization says it’s confronting Ukraine’s animal crisis head on. “The undertaking is risky, but they are determined to make it. PETA Germany is doing everything in its power to bring other urgently needed goods into the country as relief supplies.”

PETA founder Ingrid Newkirk sent this note out to PETA supporters on Sunday, February 27th, 2022. “PETA Germany has managed to get over the border from Poland and is there, shepherding animals out, and we have delivered a 7.5 ton lorry’s worth of food to a shelter that is, so far, safe… We are befriending guards who like animals, etc.”

The UK & EU Are Urged to Loosen Entry Rules During Crisis

Critics say unnecessary bureaucracy is making it impossible for desperate Ukrainian refugees to bring their beloved pets into the the European Union and the United Kingdom. PETA says, the current rules require dogs and cats be “vaccinated and microchipped and have a negative blood test for rabies.”  This is an impossible standard for pet owners racing out of a war-torn nation.

The Public Is Urged to Complain to UK Officials

PETA is urging followers to tweet by clicking here to urge officials to relax their vaccination and microchipping rules. Supports are also urged to comment on the official UK Facebook page and urge the rules be relaxed.  PETA UK has sent this letter to George Eustice, secretary of state for environment, food, and rural affairs. The letter urges him to let Ukrainian refugees cross borders with their companion animals. The letter cites the unprecedented circumstances and begs the official to relax the rules on vaccinations and microchipping.

PETA representative Ashley Byrne, UnchainedTV.com‘s Jane Velez-Mitchell, Simone Reyes, Director of Social Compassion and Donny Moss of TheirTurn.net held a panel discussion on how war devastates people and animals. But, the plight of the animal victims can get overlooked in the chaos and fog of war. That is a double injustice.

PETA founder Ingrid Newkirk says their organization is protesting in London. “All the PETA Europe affiliates, and PETA UK, have petitioned the various governments to waive restrictions on animal entries on a humanitarian emergency basis. So far,  while the Ukrainian border states of Poland, Hungary and Romania (where we do a ton of animal work), have agreed.”

PETA UK  says, while there are conflicting reports, it appears that Poland, Hungary and Romania are being somewhat more practical and compassionate and reportedly allowing animals in. Click here for the unfolding details. Animal activists are outraged that the United Kingdom and EU officials appear to be dragging their feet on this issue, and point out that already traumatized refugees are being further traumatized by having to leave their pets behind at border crossings to face almost certain death.

What about Ukrainian Shelters and Animal Groups?

Attempts to speak to animal rescuers and shelter owners on the ground in Ukraine are underway. In Defense of Animals reports that the Ukrainian non-profit Shelter_ugolyok appears to be doing great work. While we cannot vet any foreign organizations, this is that sanctuary’s Instagram page with donation information.

Sanctuary Happy Animals in the Ukraine is also reportedly working hard to keep its animals safe and take in others. Their donation information is linked here.