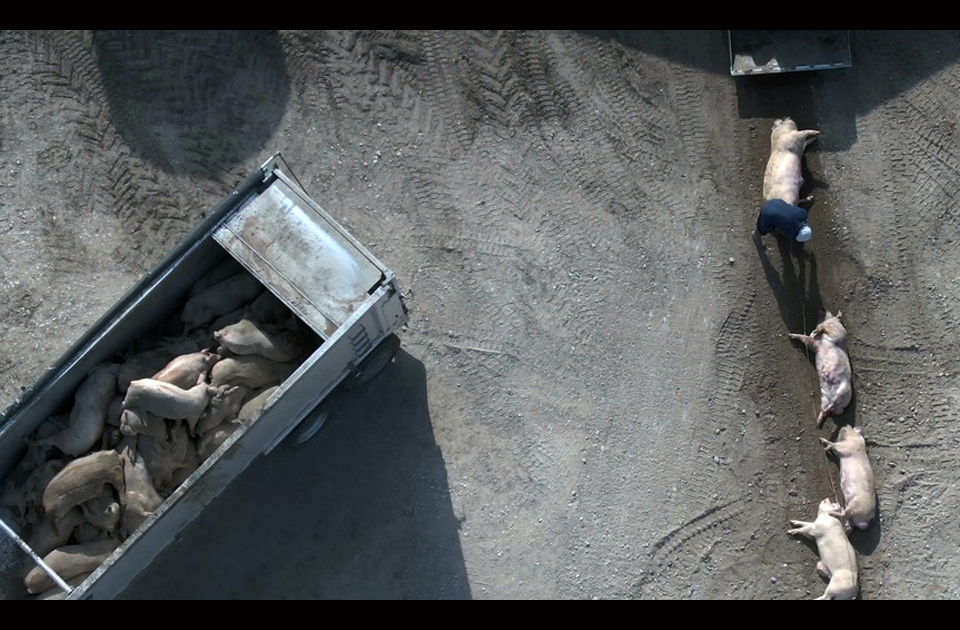 Time to Expose Ventilation Shutdown, and its Supporters

If you don’t know what ventilation shutdown is, I cannot blame you. This is about turning off the airflow in a room, pumping in steam, and letting the heat rise until everyone inside dies in prolonged agony. It’s the stuff of horror movies, you may think, but unfortunately, it’s not. It happens, and it happens a lot, killing thousands. This is the product of deranged sadistic criminals, you may think, but unfortunately, it’s not. It’s endorsed by the authorities and those who commit such atrocities are never convicted, prosecuted or even charged. Why? Because the victims are farm animals. And the American Veterinary Medical Association (AVMA) authorizes ventilation shutdown as a legitimate method of killing, in exceptional circumstances.

One such circumstance has been the COVID-19 pandemic. When slaughterhouses became hotspots of infections, many workers fell ill. The slaughterhouses had to operate with fewer men and women on the kill floor. They could not kill the same number of animals, so some “farmers” chose to kill them using this horrible method.

Law Enforcement Went After the Whistleblowers Not the Pig Killers

While a whistleblower begged government agencies to do something about this horrific cruelty, law enforcement instead  prosecuted the animal protection investigators who tried to document the suffering in these massacres. Videotape and audiotape of pigs screaming and writhing in agony had the authorities determined to nab the person who obtained the damning evidence of extreme cruelty. But, they showed no upset over the outrageous animal torture itself.

Now, the court case against undercover investigator Matt Johnson has suddenly been dropped. While that might sound like good news for the Direct Action Everywhere animal activist, it actually prevents the issue of ventilation shutdown from being exposed in a court of law, where media would likely be present, taking notes and reporting on the horrors committed against huge numbers of pigs.  It’s time we let everyone know about this secretive, shameful method of killing that is dividing the veterinary profession.

Dr. Crystal Heath is a shelter veterinarian from Berkeley, California. She is a former Vice President of her 4-H club and grew up with neighbors who raised animals for meat. She faced backlash from the animal agriculture industry for speaking out against its practices. And she gained media attention when Pulitzer Prize-winning journalist Glenn Greenwald wrote about the efforts by the industry to discredit her. As a consequence, she founded Our Honor, an organization that seeks to support and amplify the compassionate voices of veterinarians and other animal professionals who want to speak up for all animals, not just dogs and cats…  without fear of getting blackballed or persecuted.

UnchainedTV’s Jane Velez-Mitchell interviewed her after Iowa prosecutors dropped the case against DxE’s Matt Johnson.  This is what Dr. Heath said about the ventilation shutdown process after watching and listening to the evidence obtained by DxE.

“It was a horror. One of the biggest animal welfare crises of recent years. And it wasn’t just one farm that did this. This was a nationwide catastrophe. Killing up to 10 million pigs via this method. The animals suffered for a prolonged period of time before dying of heatstroke.”

“And my profession, the American Veterinary Medical Association, has lent legitimacy to this practice. It listed it in their guidelines on depopulation as a method to use in constrained circumstances. But this was not such a constrained circumstance. The pork producers could have gotten rid of these pigs in a more humane way. But they chose to use this method and it was just horrifying.”

“The AVMA should be advocating for scaling down animal agriculture.” – Dr. Crystal Heath, Veterinarian

Scenes from a Horror Movie

This is how Dr. Crystal Heath describes what she saw in the videos:

“You have pigs for the first part screaming as the temperature rises. I’ve listened to all. There are 27 hours of audio coverage of this too. You can hear the pigs entering the barn. And then they are little snippets of video that they were able to get. They weren’t able to get video of all 27 hours because that’s just impossible to do. And gradually you hear the pigs screaming more and more.

“I talked to Dr Temple Grandin about this. Why are the pigs screaming? Because she observed another case of ventilation shutdown… where she said the pigs did not scream or vocalize as much. She presumes that in this case, where Matt obtained the footage, the pigs were actually being scalded with hot water.

“I’m an animal shelter veterinarian. And I’ve seen horrifying abuse cases. But this goes beyond the worst thing I’ve ever seen. And the people who did it aren’t even going to be charged with animal cruelty.” – Dr. Crystal Heath, Veterinarian

Some Vets Support this Atrocity

Dr. Crystal Heath told Velez-Mitchell about what veterinarians think about all this.

“There’s a few in leadership and a few in the livestock industry who are defending this practice. The only way I can move forward in my life is to think that they were so normalized to violence against animals, especially in our food system, that they truly believed that they were doing the only option that they had available.

“I am also on the founding committee of an organization called Veterinarians Against Ventilation Shutdown.”

Over A Thousand Vets Say NO, Not Ever to Ventilation Shutdown!

“We have 1,500 veterinarians who have signed on asking the AVMA to reclassify this method as a NOT recommended form of depopulation. This is not euthanasia. This is depopulation. These are healthy animals. It is just astonishing the stonewalling we have gotten from the AVMA despite all of our efforts to reach out in a professional manner.

“They have refused to respond to us and refused to address this problem. It just goes to show how all of the systems that are in place legitimize our horrific treatment of animals. I think we need to start as veterinarians to raise awareness about these atrocities.

“I think a future exists where we don’t have to use animals to make our food. And veterinarians should be leading the charge on that.” – Dr. Crystal Heath, Veterinarian

Iowa’s prosecutors charged Matt Johnson, the DxE undercover investigator, in a case involving documenting ventilation shutdown in a pig farm. After he and others got a tip, they secretly placed cameras inside Iowa Select Farms premises. They recorded the killing of hundreds of animals with ventilation shutdown. According to the Washington Post, “The American Veterinary Medical Association’s guidelines said the method should be used as a last resort after others are ruled out. That it should be done quickly enough to kill 95% of the animals within an hour. And that all must be eventually killed. But Johnson captured audio of pigs shrieking, some for hours, as the temperatures rose.”

After watching the video, the Intercept published an article about ventilation shutdown. The author Glenn Greenwald said: “The Intercept, as the result of an investigation by animal rights group Direct Action Everywhere, or DxE, has obtained video footage of the procedure and the resulting carnage that occurred at one of the company’s facilities in mid-May. Additionally, a whistleblower employed by Iowa Select has provided extensive details to The Intercept about the extraordinary methods now being employed to kill pigs — agonizingly and over the course of many hours — in increasingly large numbers.”

Just before the first hearing started, the prosecution dropped all charges against Johnson. But, according to the Guardian, he did not like that: “He had hoped to use the trial to try to convince a jury that he was right to expose Iowa Select’s atrocities, create a precedent for the right to rescue suffering animals, and challenge the constitutionality of the ag-gag law he was charged under.”

What Can We Do About It?

Dr. Crystal Heath is asking people to help her and other compassionate vets in this campaign:

“I founded a 501 C3 organization called Our Honor. You can check out our website at OurHonor.org and what we’re working on. We are working to get a group of veterinarians together who can comment on the AVMA’s policy and talk to legislators and set policy that will center the interests of animals instead of corporate profits.

“We accept all people to join us. It’s not just veterinarians. It’s all animal professionals and we need anybody willing to write, make graphics for us, share on social media. Get involved. Connect with us via the website.”

You can also sign a petition to AVMA asking to remove the inhumane Ventilation Shutdown as an acceptable depopulation method.

At the end of the day, all of this boils down to the following: if you did this to a dog, police would arrest you and charge you with animal cruelty. We must do something about this. Jane Velez-Mitchell summarized what else we all can do: “What ultimately gives the industry power is the consumer dollar. If the company is doing a ventilation shutdown, the consumers are the ones who are paying for it. If consumers are upset about this, the moral response should be: ‘I’m not going to buy that. I’m not going to buy bacon’.”

We invite Iowa Select Farms and the AVMA on any time to respond to the critics of their policies.