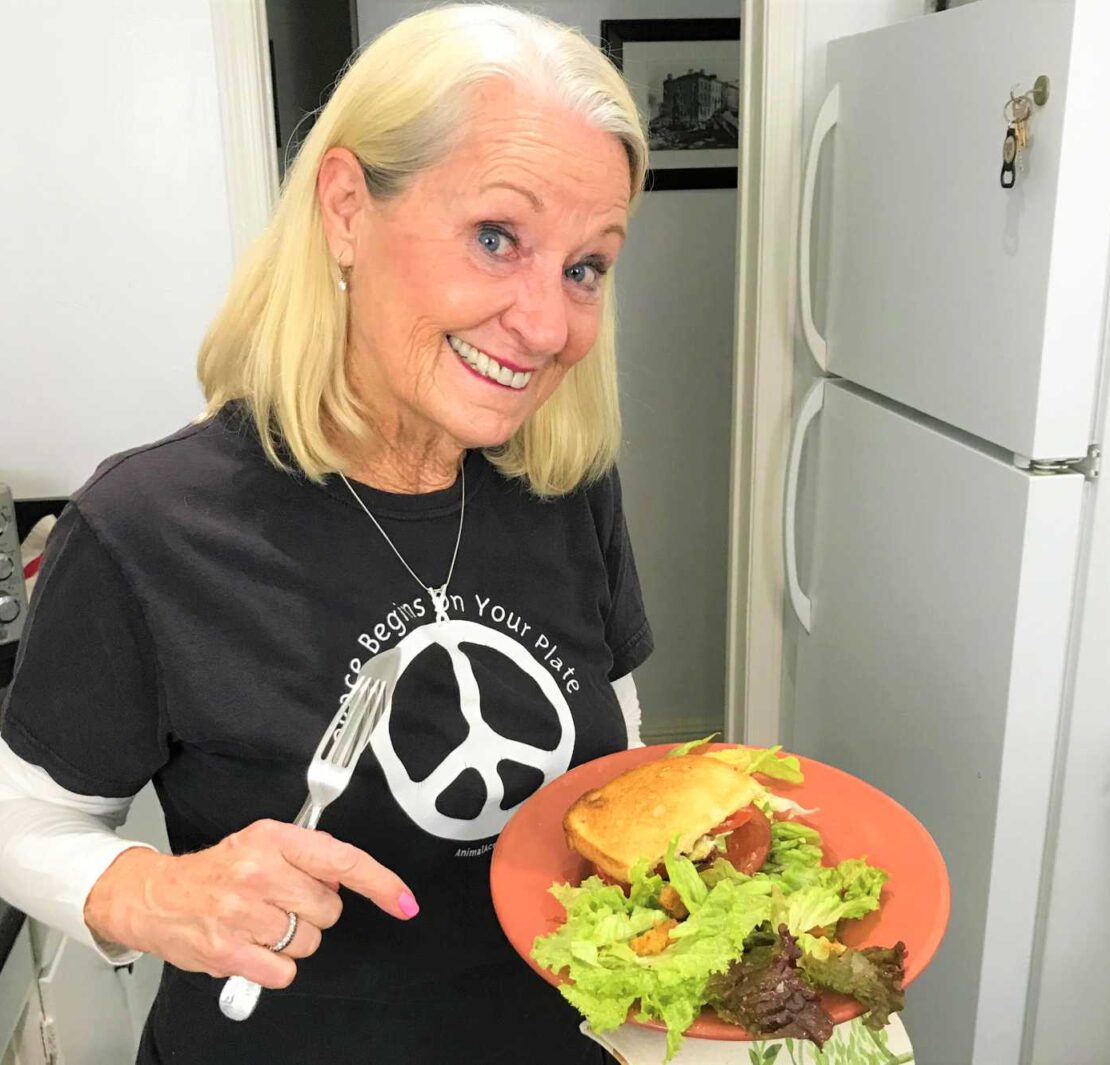 Vegan eating just got simple! On #OneVeggieAtATime, the fabulous LA based animal rights activist & philanthropist party Patty Shenker shows us her no fuss, vegan BLTA (“Veggie” Bacon, Lettuce, Tomato, & Avocado) sandwich.
Patty makes sure that her ingredients are palm oil-free because she has personally been to Indonesia where they are tearing down forests and endangering orangutans as well as many other species by doing so. Patty explains indigenous people are also losing their homes as well, and companies may use child labor in order produce the oil. The deforestation of the forest is also causing the release of carbon into the environment, and this leads to adverse climate change. Please consider avoiding products that have palm oil in their ingredient list.
Patty became a vegetarian 49 years ago when she came to college in California. One night she decided that she wanted to live a non-violent life and she realized that the meat on her plate was the embodiment of violence. Thirty-one years later, Patti realized that all animal products were produced with cruelty against animals, so she transitioned to veganism. Patty also coined the inspirational phrase, “Peace begins on your plate.” She has worked with many animal rights groups and celebrities to raise awareness of issues concerning the treatment of animals. You can get active with Patty tomorrow, Saturday Jan 12, 2019, at 11 a.m. in the Beverly Hills, CA area at the “Worldwide Rally Against Worldwide Trophy Hunting.”  If you can’t make it to that event, you can also join Patty at protests for an elephant named Billy that many say has been suffering in captivity at the L.A. Zoo.
Patty doesn’t cook so she is not trying to spend too much time in the kitchen prepar. Patty shows us her ingredients first and turns on the stove. She likes to use red leaf lettuce and Yves brand veggie bacon. Patty gets the veggie bacon nice and crispy in a pan and then she piles the ingredients onto a couple pieces of bread and makes a side salad for even more plant power. Antoinette tries the sandwich and says it is so good. Try making Patty’s no fuss vegan sandwich at home with the recipe below and let “peace begin on your plate.”
Come to the Worldwide Rally Against Worldwide Trophy Hunting!
Help Free Billy the Elephant!
Visit Animal Acres Sanctuary!
Host Antoinette Westcott reports for #JaneUnChained.
Photos and camerawork by Eric Faison.

Yves veggie bacon (or other brand)

You’re Invited to the SCIL Gala for the Animals!