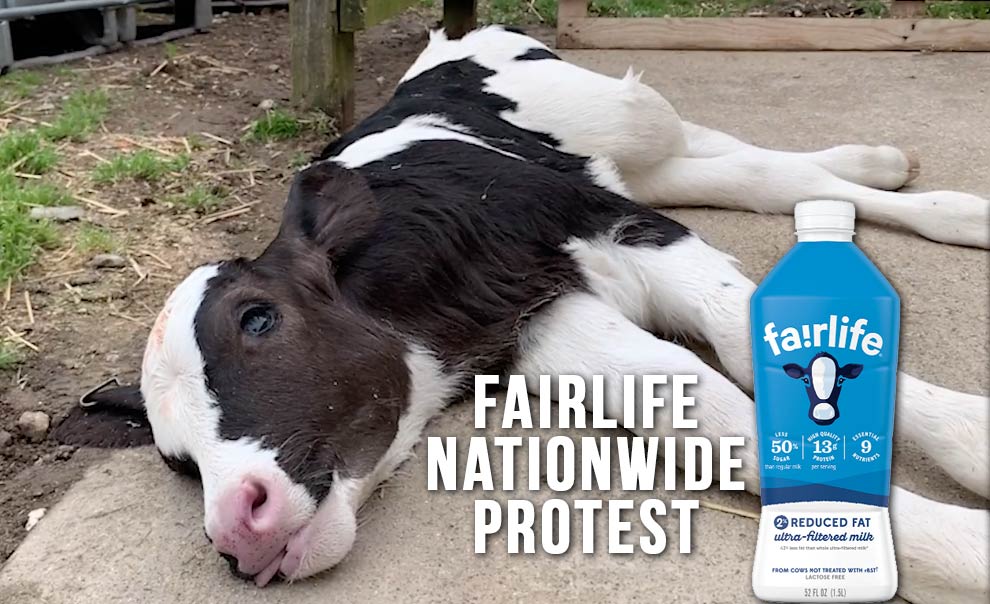 “Dairy farms are the last true legal concentration camps left on the face of the earth.” 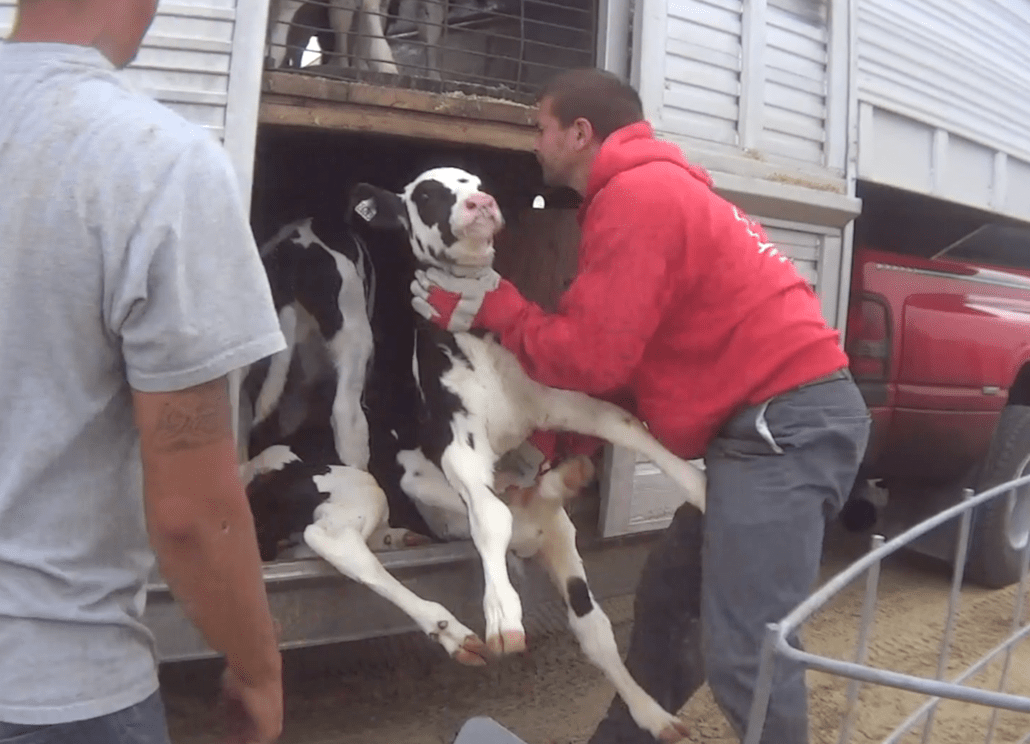 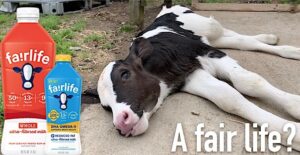 “We have never seen such consistent, constant abuse to newborn baby animals” than at Fair Oaks Farms, investigat…

Read the detailed report by Free From Harm

Chicago, Atlanta, New York, Los Angeles – Demonstrations are taking place on Monday, June 10 around the nation where concerned and disgusted citizens are protesting the animal abuse at Fair Oaks Farms, supplier to Fairlife brand, distributed by Coca-Cola, as documented on camera by Animal Recovery Mission’s (ARM) 3-month long undercover investigation. The protests are also against the inherent cruelty of the dairy industry as a whole. **At exactly 12:30p each protest will feature a mock dead pile of humans imitating the pile of dead calves, one of the atrocities discovered by ARM at Fair Oaks Farms.

“As a mother myself, I find it particularly disturbing that the dairy industry relies on the violence and the shattering of the mother-infant bond to exist.” 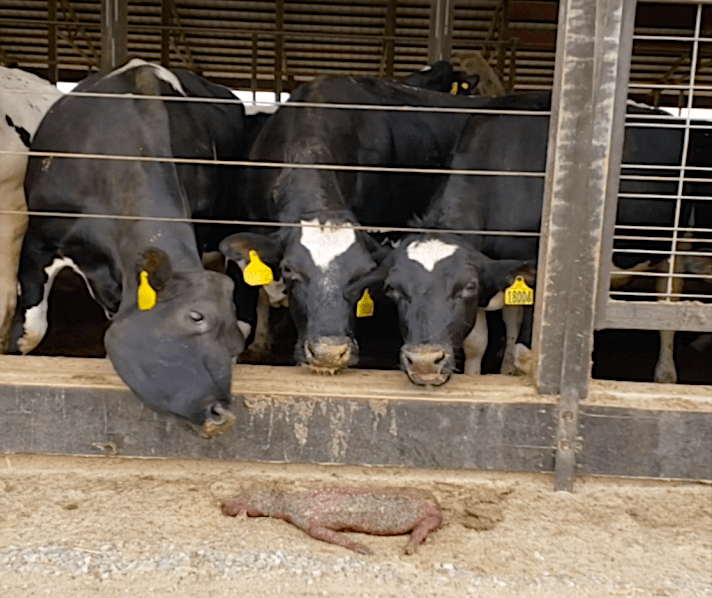 Picture of a stillborn from ARM Undercover Investigation at Fair Oaks Farms.At the national protests, citizens will be expressing their outrage over the documented abuses at Fair Oaks Farms and also denouncing the inherent cruelty of the dairy industry, not only as it relates to Fair Oaks.  According to Robert Grillo of Free From Harm, Chicago, “The root problem is that animals who are valued by an entire industry as cheap commodities will be treated as cheap commodities, creating the perfect conditions under which abuse thrives.”Furthering this argument, in a completely separate and unrelated investigation in another part of the United States, Compassion Over Killing’s recent undercover investigation of Martin Farms was featured on ABC 7’s WJLA (Washington, D.C.) by reporter Scott Taylor.  The investigation of Martin Farms, a supplier to Nestle owned ice cream brands, revealed equally disturbing findings of animal abuses, such as painful burning and dehorning without anesthesia.  Executive Vice President of Compassion Over Killing, Cheryl Leahy, states, “Our investigation of Martin Farms shows severely abusive practices which we believe should be prosecuted like any animal cruelty, just like if it were inflicted on the dogs and cats with whom we share our homes. This includes practices that are commonplace in the dairy industry, and some that are not. Martin Farms supplied milk to Nestle, which severed ties with the farm following our investigation.“As a mother myself, I find the violence and the shattering of the mother-infant bond that the dairy industry relies upon to exist profoundly disturbing.”Nestle has since broken ties with Martin Farms due to Compassion Over Killing’s investigation. Protesters and ARM are calling on Coca-Cola to do the same with Fairlife, which gets its milk from Fair Oaks Farms.

At 12:30p Protestors Nationwide are Creating a Mock Dead Pile Like the Dead Pile of Calves Documented at Fair Oaks Farms. 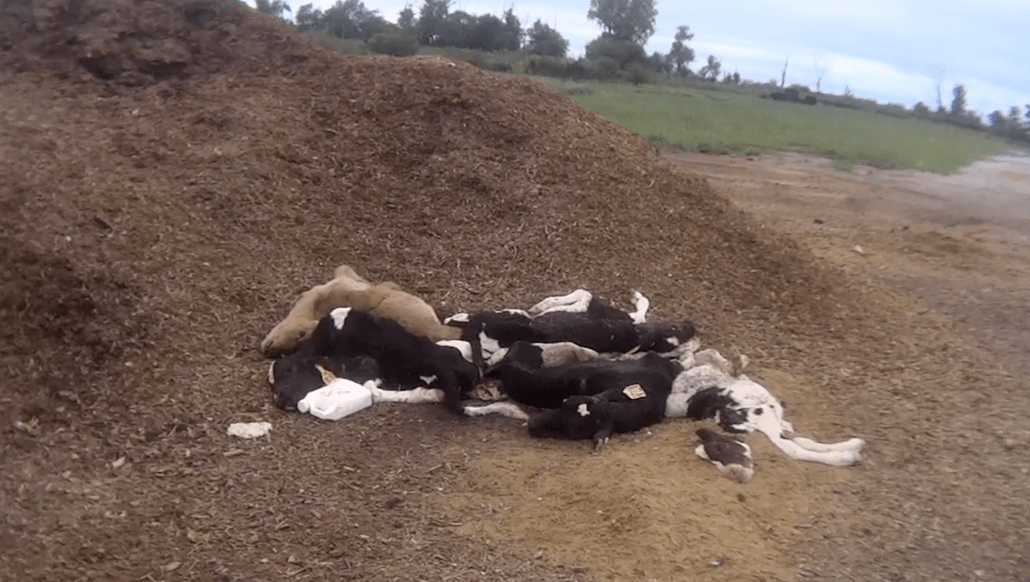 Picture of a pile of dead calves from the ARM Undercover Investigation at Fair Oaks Farms.At exactly 12:30p in Chicago, Atlanta, New York City and Los Angeles, citizens will be forming mock dead piles imitating the dead calf piles documented at Fair Oaks Farms by ARM. Their hope is to bring attention to the apparent cruelty in the entire dairy industry.In Los Angeles, twelve year-old social media star Genesis Butler, who famously asked the Pope to Go Vegan during Lent, and eight year-old YouTube sensation Vegan Evan, will be leading the protest.

“Coca-Cola needs to dump dairy! There’s no kind way to rip baby cows from their mothers so we can steal their milk.” 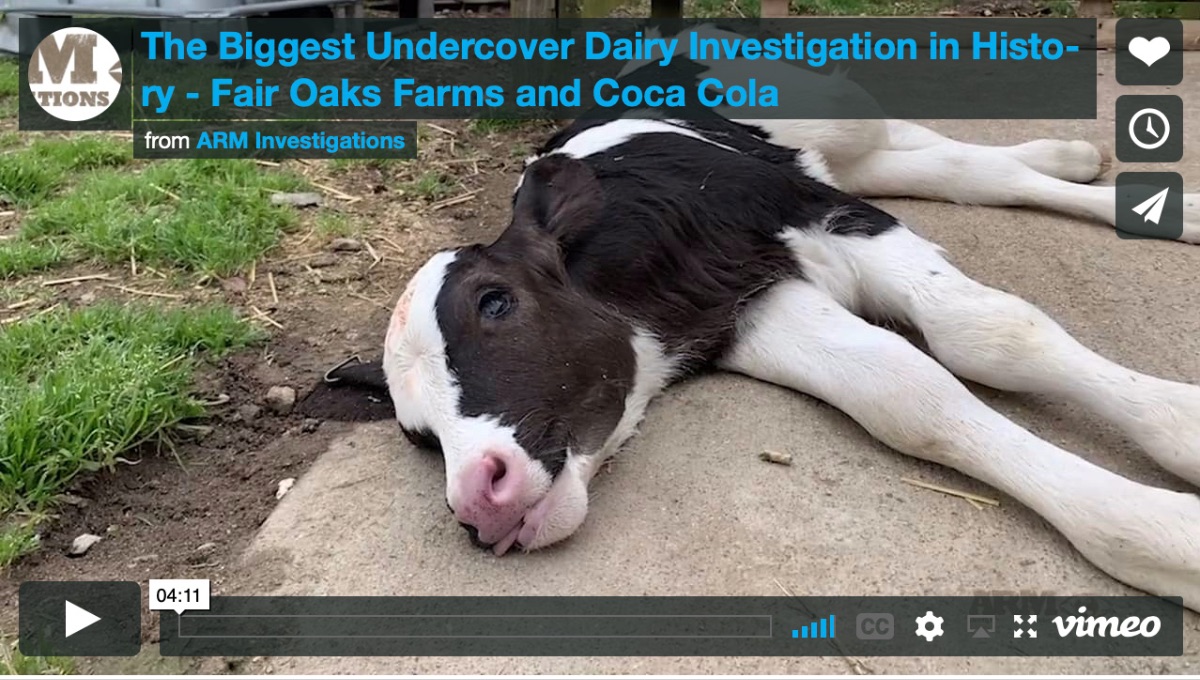 Video from the ARM Undercover Investigation at Fair Oaks Farms. Animal Recovery Mission calls on the Coca-Cola Corporation, which distributes Fairlife products and which claims to have a progressive stance on animal welfare, to end their relationship with Fairlife Corporation and cut their ties with the veal industry.Best-selling author, TV journalist and founder of the JaneUnchained News Network, Jane Velez-Mitchell says, “Coca-Cola needs to dump dairy! There’s no kind way to rip baby cows from their mothers so we can steal their milk, which is packed with artery clogging cholesterol! Go plant-based Coke! It’s the future!”In an editorial piece in The Chicago Tribune, it was noted that, “The gratuitous cruelty shown in the video would be appalling for any reputable agribusiness to allow. The bucolic marketing of Fair Oaks Farms represents a double betrayal.”

Fair Oaks Farms sold a story of a happy place with well-tended animals. An undercover video tells a different st…

The ARM investigation of Fair Oaks Farms and its display of horrific abuse has proliferated throughout the media. As a result, several major food retailers, such as Jewel-Osco stores as reported by The Chicago Tribune, have dropped Fairlife products.

Protestors Are Calling for a BOYCOTT of Coca-Cola Until It Ditches Dairy. Businesses Are Already Doing It. 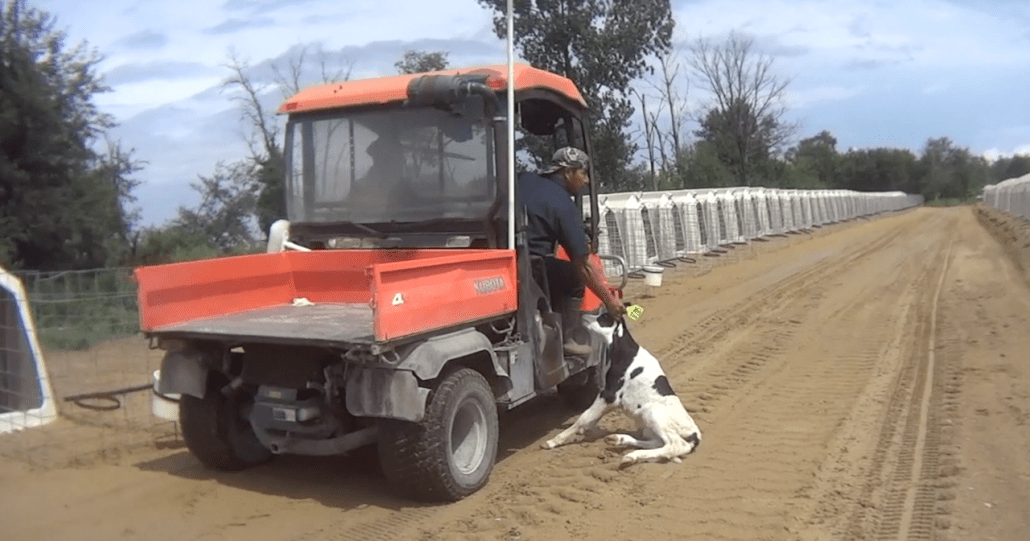 Hinterhoff Restaurant of LA has already

I am horrified to know that they have a hand in the dairy industry! Also, looking for a vegan orange juice that is NOT owned by coke. Simply Orange is outta here. No more of our money going to unethical and disturbing practices.”

Protesters across the nation are calling for a boycott of all Coca-Cola products until Coke ditches dairy. 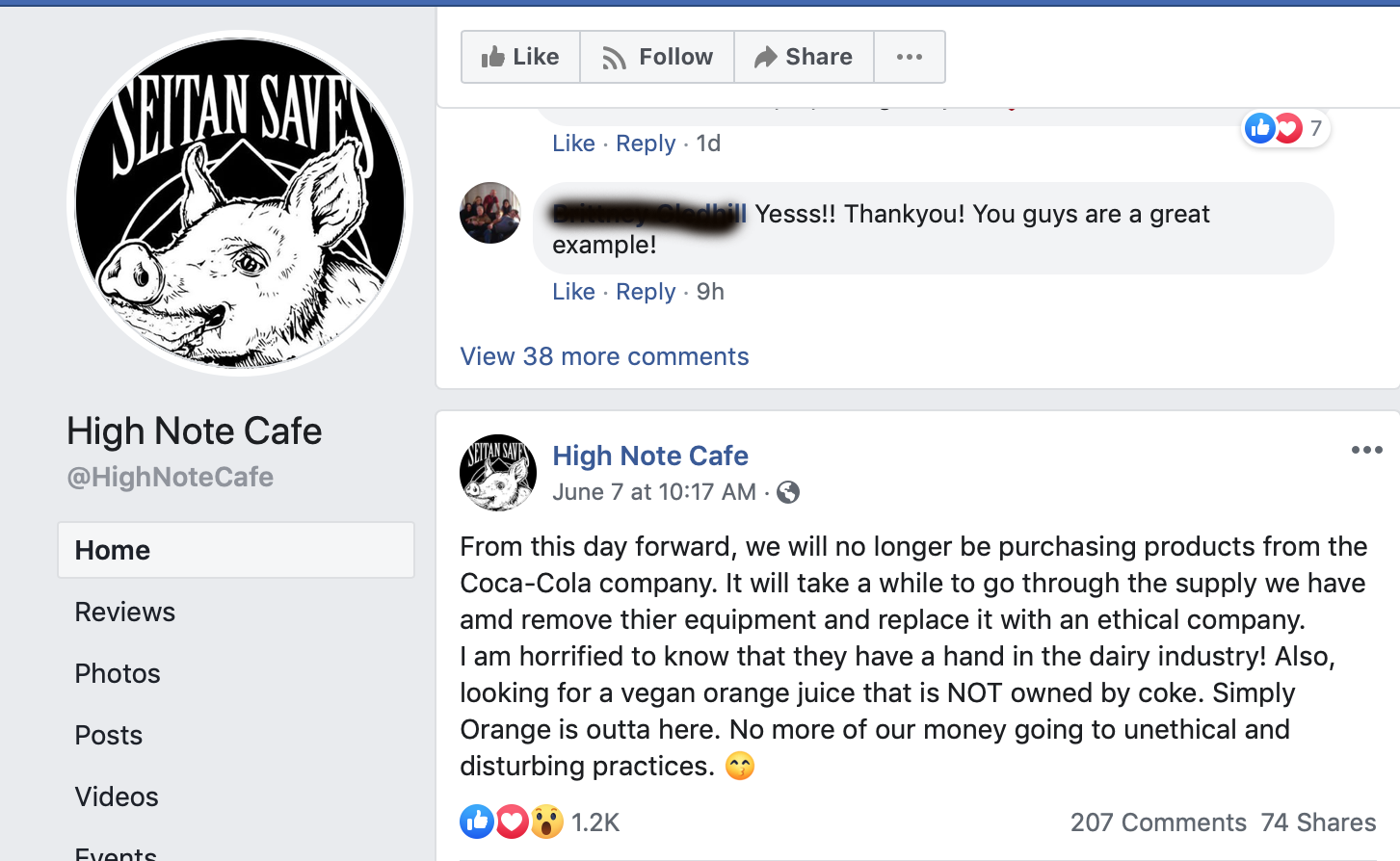 Animal Rights March Takes Over The Streets of San Francisco!