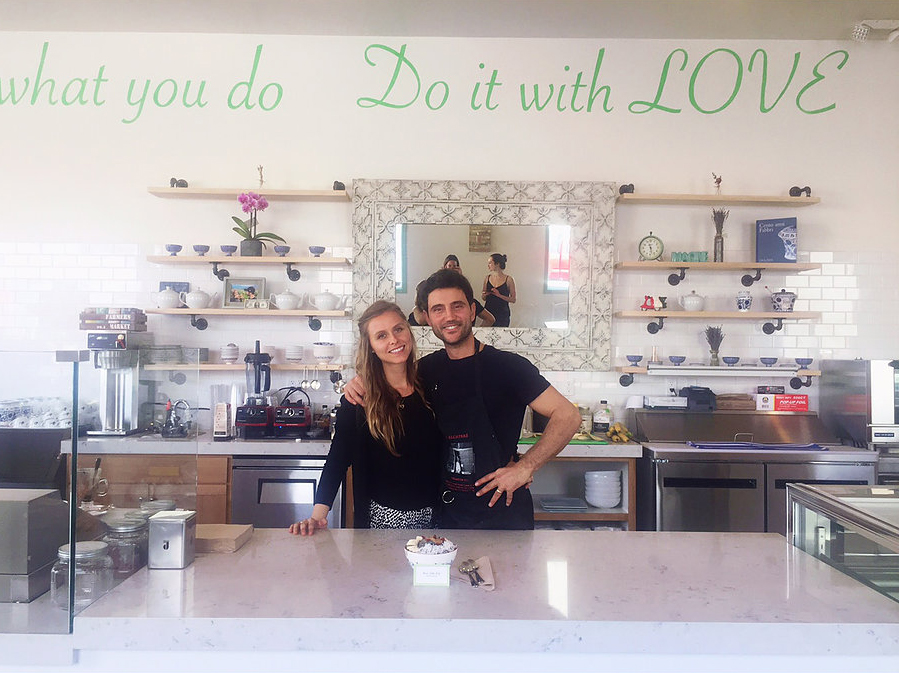 LOS ANGELES, CA, June 29, 2019,  #JaneUnChained  LIVE at the Green Table Cafe, a beautiful Italian plant-based café in Los Angeles. This special #SaturdaySnackDown is with Simone Reyes of Social Compassion In Legislation and Lisa Karlan of Physicians Committee for Responsible Medicine. Join them as they discuss current topics in the vegan community over a delicious vegan lunch.

Green Table Cafe, began with Led & Britney in March 2017, a husband and wife team, who are certified registered Holistic Nutritionists, Life Coaches, and amazing chefs and pâtissiers. They created the first Italian-inspired plant-based restaurant in the country, by veganizing traditional Italian dishes, desserts, and pastries…..which also includes the best vegan croissants in Los Angeles, according to JaneUnChained contributor, Lisa Karlan (who is always in search of the perfect vegan croissant). Many of their menu selections include dishes that are raw, as well as plentiful choices that are gluten and nut free.

When you arrive at Green Table Cafe, you are greeted by the friendly and knowledgable staff, who strive to make your dining experience pleasant and satisfying. There is a large menu chalkboard, with beautiful calligraphy describing every menu category from salads, superfood bowls, burgers & pressed paninis, juices & smoothies, coffee drinks, and amazing pastries. It wouldn’t be an Italian cafe without an authentic espresso bar with homemade almond mylk and a variety of other plant-based milk too.

If you are fortunate enough to visit this extraordinary cafe, be sure to order one of their lattes, made with freshly ground espresso. Their baristas create beautiful designs on the surface of the latte using the foam from the plant-based mylk – it’s truly a work of art!

During this very special episode of #SaturdaySnackDown, Simone Reyes shared with us what is happening with Social Compassion in Legislation and all the important bills they have been working on.

This is what was discussed:

SB 64 (Chang) Pet Microchipping, was approved on a vote of 19-0 by the Assembly Business & Professions Committee. SB 64, authored by Senator Ling Ling Chang, requires that all municipal animal shelters microchip any dog or cat that is either adopted or claimed by a pet owner. In addition to saving the lives of thousands of pets, this bill will also save California taxpayers funds by significantly reducing the number of animals euthanized and sheltered. The bill has been waived from the Assembly Appropriations Committee and will be reporting to the full Assembly Floor for a vote.

SB 202 (Wilk) Animal Blood Banks, was approved 12-0 by the Assembly Judiciary Committee. California currently suffers from a shortage of animal blood, which is desperately needed by veterinarians for lifesaving transfusions. SB 202, authored by Senator Scott Wilk (R-Lancaster), aims to address the shortage by allowing for the commercial use of blood from community-sourced animal donors, providing a new, abundant supply of blood for veterinarians. The bill will now be heard and voted on by the Assembly Agriculture Committee on July 3rd.

SB 313 (Hueso) CA Circus Cruelty Prevention Act, was approved 9-2-1 by the Assembly Judiciary Committee. Wild bears, tigers, elephants and other animals in circuses are carted around the country, often in extreme conditions, and are forced to do difficult, unnatural tricks. If they don’t perform, sometimes they are beaten. This bill, authored by state Senator Ben Hueso (D-San Diego), would ban the cruel use of animals in circuses in California. SB 313 will now be sent to Assembly Appropriations Committee.

Vegan Tamales Just In Time For The Holidays!

AB 1260 (Maienschein) Exotic Skins, was approved 7-2-0 by the Senate Natural Resources & Water Committee. There is currently a ban on the importation with the intent to sell and the sale of several threatened or endangered species, including big cats, polar bears, dolphins, and other animals. AB 1260, authored by Assemblymember Brian Maienschein, adds hippopotami, caiman, and several lizard species to that list, working to further protect animals that are suffering greatly for the sake of fashion and vanity. The bill will now be set to be heard in Senate Appropriations Committee.

SCIL is also having a fundraising event on July 27 to welcome Diane Keaton and Maggie Q to their board of directors!

Now let’s take a look at some of the delicious food that Simone and Lisa enjoyed during #SaturdaySnackDown on JaneUnChained!