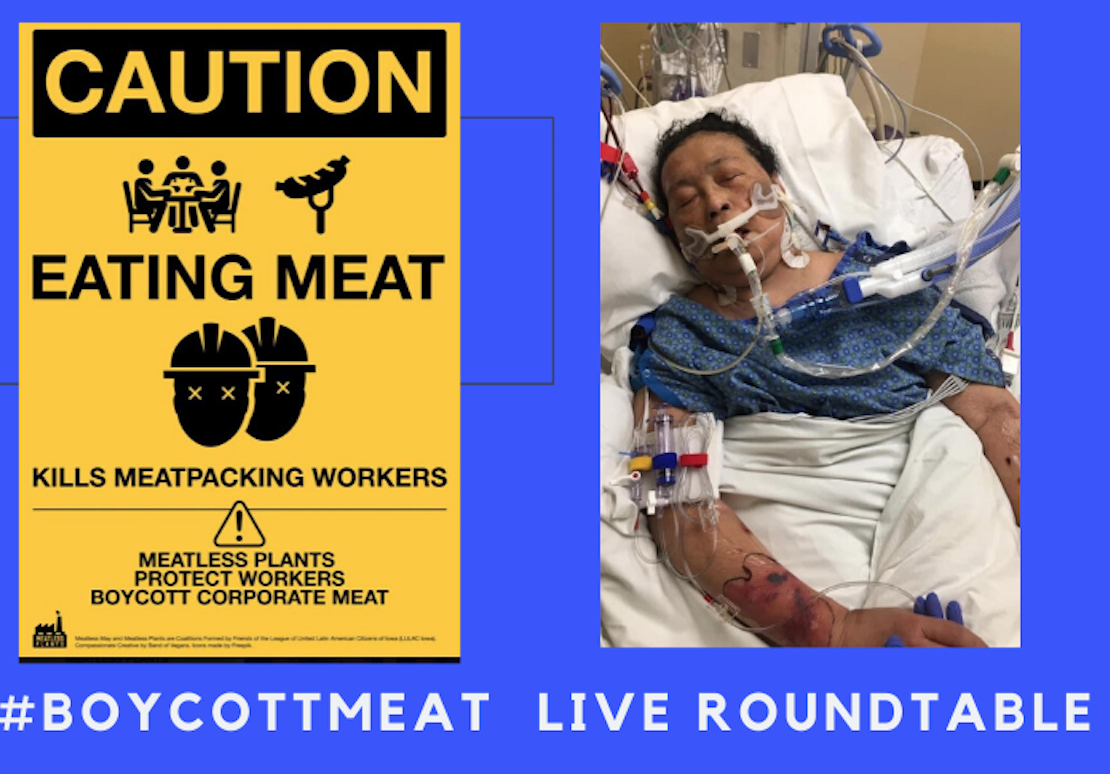 We vegans live in a perpetual state of boycotting meat. No news there. What is news… big news… is that organizations that advocate for America’s workers are starting to sound like vegan activists, urging consumers to stop eating animals in a show of solidarity with slaughterhouse workers who are getting sick and dying from the coronavirus. Slaughterhouses have become one of the top COVID-19 hotspots, along with nursing homes and prisons.

Now, JaneUnChained is hosting a weekly #LIVE #BoycottMeat roundtable every Monday at 3pm pacific/6pm Eastern at Facebook.com/JaneVelezMitchell. Workers’ rights advocates and animal rights activists will discuss their common cause: standing up to an industry that traffics in suffering and death. As of June 24th, at least 99 slaughterhouse workers had died of COVID-19 and many more have fallen ill. To that, the #BoycottMeat coalition members say, “enough!” Here’s a look at the campaign.

The advertiser-based media is terrified of even saying the word slaughterhouse. It reminds people of what actually happens inside those facilities, namely, slaughter. The cable channels prefer the term meatpacking, which sounds like somebody packing up some steak for a trip. Either way, the uncomfortable topic of facilities where terrified pigs, cows and chickens are killed and chopped up has been in the news a lot lately because these places have also become slaughterhouses for people.

On June 24th, there was a news conference where advocates for slaughterhouse workers, several prominent physicians and animal welfare activists joined forces to urge consumers to shun meat.  The Iowa affiliate of LULAC, the nation’s largest Latino civil rights organization, led the #BoycottMeat event, noting a significant percentage of slaughterhouse workers are Latino immigrants, although 30 languages are spoken at one slaughterhouse alone. Dr Milton Mills spoke of the impact of environmental racism. Dr Neal Barnard, President of Physicians Committee for Responsible Medicine, noted the CDC suggests workers maintain social distancing on the fast-moving kill lines and in the cramped locker rooms. Dr Barnard added, “good luck with that.”

The assembled doctors pointed out the obvious fact that meat is not an essential product. Millions of people live healthier than average lives without any meat or dairy. Those are us vegans. In fact, a lot of society’s most pressing problems could be tackled by simply ending the unnecessary practice of eating meat. I’m talking about global warming, habitat destruction, wildlife extinction, human world hunger (animals eat a heck of a lot more than they produce as food) and lifestyle disease like heart disease and cancer. And, we can also add pandemics to the list. Zoonotic diseases, like COVID-19, jump from animals to humans because of the abuse of animals. Evidence points to the pandemic starting and/or spreading from a “wet market,” another slaughterhouse synonym. Mad Cow disease, Avian Flu and Swine Flu… all stemmed from the abuse of farmed animals. The next pandemic could pop up on the horizon at any time.. even as this one continues to kill people and destroy economies.

So, why are humans dying for a product that is anything but essential? The powerful meat industry has friends in high places. President Trump invoked the Defense Protection Action to declare slaughterhouses as “critical infrastructure,” protecting the meat industry from liability and further weakening the rights of workers who live at the lowest end of the economic scale. Meanwhile, even as workers risked their lives to march into virus-infested workplaces, meat companies were exporting the product overseas. So much for feeding America.

It’s bad enough that most Americans can’t even look at slaughterhouse footage. Now, people are dying because somebody happens to like the taste of a chicken wing or a slice of ham. Bottom line is this: anyone who even pretends to care about people should avoid eating animals.

New Plan to Save LA’s Ballona Wetlands from Bulldozers!