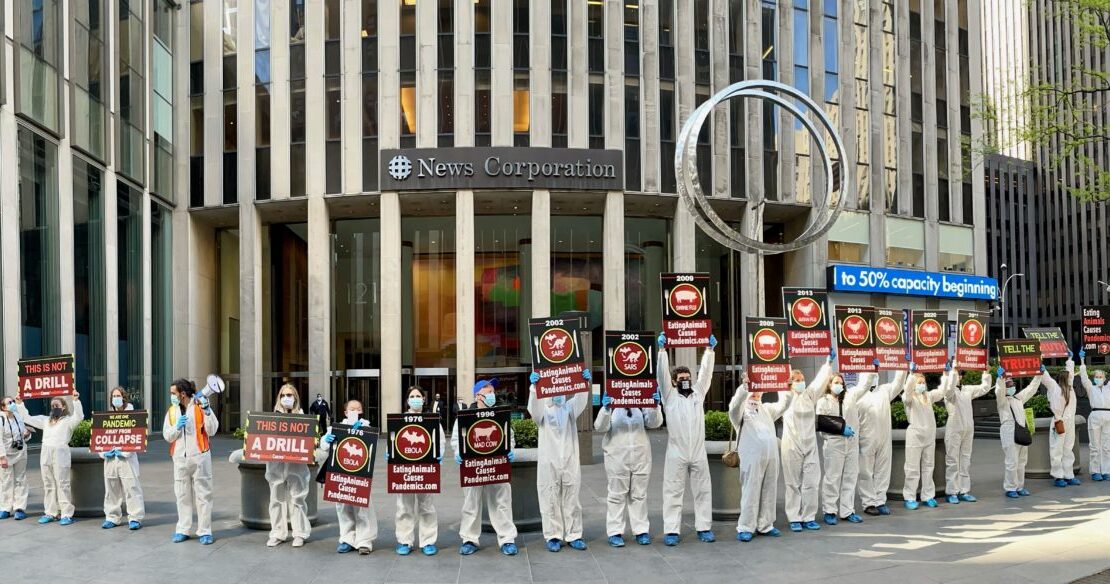 Activists from across the globe are out on the streets begging the mainstream media to make the connection: animal exploitation causes pandemics. On May 1st, this effort came together for a global series of demonstrations. In a visually compelling tour de force, hundreds of activists came out in hazmat suits with alarms blazing! From Times Square to Hollywood and beyond, they marched and chanted. Still, not one single mainstream media network was willing to report the story. Why not? Just look at the commercials.  Meat/Dairy/Fast Food and Big Pharma pay the bills at the news networks. Do you think they want the news anchors to be discussing how animal exploitation causes pandemics? Nyet!

Jane Velez-Mitchell discusses the topic with a number of key figures in the movement. Lead organizer Ray Ippolito, NYCLASS‘s Edita Birnkrant, Canada’s Ray Kowalchuk of Climate Healers and the Animal Save Movement, Florida’s Shannon Blair and LA’s Ellen Dent and Cesar Asebedo of Animal Alliance Network. The Virsa Foundation’s Nivi Jaswal joins us to report on the COVID-19 devastation she has seen with her own eyes during a recent trip to India. Check it out!

I think we can all agree that this pandemic has felt never-ending.  However, we must do more than take protective measures now. We need to start taking immediate action to prevent the next pandemic. “We’re not talking about the root cause, which is the use, abuse, and consumption of animals which creates over 75% of all pandemics,” explains Ray Ippolito. The National Institutes of Health says it flat out, although in small print not many get around to reading. “Nearly 75% of all emerging infectious diseases (EIDs) that impact or threaten human health are zoonotic. The majority have spilled from wildlife reservoirs, either directly to humans or via domestic animals. The emergence of many can be attributed to predisposing factors such as global travel, trade, agricultural expansion, deforestation/habitat fragmentation, and urbanization; such factors increase the interface and/or the rate of contact between human, domestic animal, and wildlife populations, thereby creating increased opportunities for spillover events to occur.”

THE MOST OBVIOUS EXPLANATION FOR COVID-19 IS THE STORY NOT BEING DISCUSSED!

COVID-19 was first detected in China in connection with a Wuhan wet market where animals, both domestic and wild, are sold and where blood, feces, and body parts abound. Conspiracy theories aside,  the likelihood is that it went from bats to humans through an intermediary species, like pangolins,  sold in wet markets.  While scientists can’t attest to the origin with 100% certainty, that’s like saying we could never convict anyone of murder without the murder being caught on videotape. Logic, history, and deductive reasoning, all point to the wet market origin. This is likely why the World Health Organization recently urged all wet slaughter markets to stop selling wild animals, a crucial story also overlooked by much of mainstream news media. This report, from CBS, is a noteworthy exception.

Legislative proposals in both New York and Los Angeles, which target wet slaughter markets, have been largely ignored by mainstream media.  The rare reports that do exist tend to vilify the proposals. Few are aware that there are at least 80 retail slaughter markets in New York City alone!

Activists brought this issue straight to the doors of major networks, including Fox News. Check out this video below created by independent animal rights news outlet TheirTurn.net documenting the NYC action! Basically, JaneUnChained and TheirTurn were the only news outlets covering this.

Zoonotic diseases are diseases that jump from animals to humans. The Centers for Disease Control and Prevention (CDC) has put out statistics that are shocking and should be making headlines daily. The bullet points below are directly from the CDC.

SO, WHY AREN’T WE RACING TO PREVENT THE NEXT PANDEMIC?

IS IT BECAUSE POWERFUL FORCES ARE MAKING $$$$$$ BY EXPLOITING ANIMALS?

“This is not secret information. The United Nations issued a report back in 2019 explaining that future pandemics are coming, and they’re expected to take out 10 million humans by 2050.” says Shannon Blair, a Florida animal activist who participated in the global demonstrations. While it’s not a secret, the news media is keeping this crucial information from the people who don’t read research papers, namely, the general public, which relies on the news media for information and to make decisions about what to buy and what to eat!

DON’T WE WANT TO AVOID THE NEXT PANDEMIC?

There’s no telling when the next pandemic will strike. But the first step in preventing it is getting real about what causes them in the first place.

“2020’s COVID-19: a dress rehearsal for even more devastating future pandemics. This is a call to change our food system before it is too late.” EatingAnimalsCausesPandemics.com

We need mainstream media to publicly make the connection so the public can advocate for real, systemic change.

A Beyond Burger Recipe That’s Not A Burger

Stop the Next Pandemic Before It Starts

McPlant or Pandemic! Time to Decide!