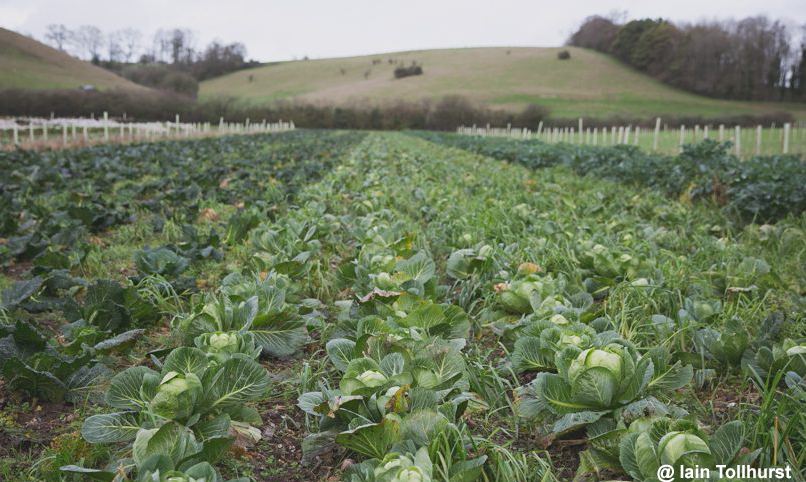 The Solution to Our Food Crisis Is Regenerative Veganic Agriculture

We are experiencing a global food crisis. Not only because of world’s  hunger but because of the climate, health and animal crises created by the way we produce food. Regenerative Veganic Agriculture is the best solution, although it is still in development and remains unknown by the average consumer.

There has been a lot of discussion about changing the way we humans produce food. Ending factory farming could certainly be a start, but we also need to change the way we produce vegetables. Although less than animal agriculture, crops can also damage the environment and harm animals either accidentally (harvest) or deliberately (pesticides). The philosophy of veganism can help to change this too.

The Birth of Veganic Farming

In the 1950s, concerns for the environment became more prominent among those who tried to follow an ethical lifestyle. However, for vegans, organic farming was an incomplete solution. Although it avoided chemical fertilizers, it used products from animal agriculture, such as animal manure. Something better was needed, and, among others, members of the Vegan Society in the UK came up with it.

In 1960, we first see the term veganic farming published in Rosa Dalziel O’Brien’s gardening column of the society’s magazine. It described the method of animal-free cultivation that she and her brother Kenneth practiced. They use a term first coined by Geoffrey L. Rudd by joining the words vegetable and organic. Veganic farming is the organic cultivation of plants and crops with a minimal amount of exploitation or harm to any animal. For instance, no use of animal manure or bone/fish meal, and use instead mulch, vegetable compost, green manure, or chipped branched wood. No pesticides and no use of animals to plough fields either. Veganic farmers try to produce their sources of fertility directly on the farm and use cop rotation and polyculture.

With time, veganic farmers grew in numbers and become organized, developing different approaches and standards. To compensate for the damage we have already caused to the planet, they stepped up their environmental considerations in their methods. Eventually, they transformed what started being low scale experimental farming to avoid harming animals into what we know today as Regenerative Veganic Agriculture. This can produce food for society sustainably and compassionately, and help to repair the planet faster.

The veganic maxim is: by feeding organic plant-based materials to the soil, the soil will feed the plants.

A recent study of American veganic farmers showed how different farmers may interpret the definition of veganic farming differently. For instance, Some accepted using worm castings, bat guano, and manure from sanctuary animals. For this reason, some pioneer farmers created official standards.

In different parts of the world, we find different terms being used for this type of farming (sometimes called stockfree farming, or veganics). Slightly different approaches can also lead to different commercial standards. For instance, Biocyclic Vegan Agriculture (BVA), pioneered in Germany by Adolf Hoops in the 1950s and renamed by Dr. ag. Johannes Eisenbach in the 1980s. In 2017 its official standards became international. Like other types of veganic farming, it is purely plant-based organic farming excluding any inputs of animal origin. However, it especially promotes biodiversity, healthy soil life, the closure of organic cycles and systematic build-up of humus. Humus is defined as, “The organic component of soil, formed by the decomposition of leaves and other plant material by soil microorganisms.” It also uses companion planting, catch crops, extensive crop rotation and the implementation of semi-natural habitats within the boundaries of and/or on the cultivating land.

The Swedish animal rights activist Peter Albrecht turned into a veganic farmer. He runs a website for this type of farming to help others to do the same. In a recent summit to end factory farming in the US, he told Jane Velez-Mitchell: “People don’t believe that it is possible to grow plants with plants. They think they must grow plants with animals. That’s why you have to have the standard. To show them how to do it.”

“In Europe, we are already organized around this issue. Turning farms not only to grow vegetable crops but also doing it in a vegan style. The solution is already here.” –Peter Albrecht, Swedish veganic farmer.

After the creation of the Vegan Organic Network in 1996, the UK created its veganic standards called Certified Stockfree-Organic. The Soil Association, which deals with organic certification as well, inspects the farms under these standards.  Its members grow crops organically with only plant-based fertilizers, encouraging functional biodiversity so pesticides are not necessary. The standards show four types of practices: recommended, permitted, restricted and prohibited.

Among many detailed rules, no pesticides, no herbicides, no GMOs and no animal by-products are permitted in any part of the chain. They cannot keep animals for food production or commercial gain on the registered holding. Farms also minimize their reliance on off-farm inputs and non-renewable resources. They use physical barriers to deal with competing species, and they do not intentionally kill any animals on their holdings.

By adding organic material to the soil, and by using green manures, composts, mulching, and crop rotations, they work toward long-term fertility. These standards permit certain rock powders and soluble fertilizers as a supplement to recommended fertilization practices. There must be sufficient buffer zones or hedges if the farm is close to sprayed fields.

Another member of regenerative veganic agriculture is veganic permaculture. Permaculture (or permanent agriculture) is a philosophical approach to land management adopting arrangements observed in stable natural ecosystems. It follows three ethical principles: Earth care, people care and fairshare. The American Joseph Russell Smith and the Japanese Toyohiko Kagawa pioneered this farming in the 1930s, and the Australian P. A. Yeomans and Tasmanian Bill Mollison in the 1960s.

The Canadian Meghan Kelly, the co-founder with Stephane Groleau of the Vegan Agriculture Network, wrote the following in a blog: “Veganic permaculture systems can be designed with free-living animals in mind, to ensure that habitats and food sources are available to animals that live naturally in the area. Adding water points, hedges, trees, shrubs, bat boxes, birdhouses, piles of stones and logs for snakes, flowers for pollinators, and herbs and berries can encourage the presence of wild animals.”

“Ensuring there are habitats and food sources for free-living animals can also be seen as an extension of the ‘fair share’ ethic of permaculture, by openly sharing resources with local animals” -Meghan Kelly, co-founder of the Vegan Agriculture Network

What about Regenerative Veganic Agriculture in the USA?

This type of compassionate farming is happening in the USA too. Research by Loyola Marymount and Vermont universities in 2018 on 25 veganic farmers from 19 farms in the United States proves that. They took their sample from a map of more than 50 veganic farms in the USA. However, this research showed their approach to the concept is more varied than in Europe. This is because although American veganic farmers could adopt any of the standards mentioned above, no official US-wide standard exists. Nevertheless, around 2008, a US-based peer-inspection certification program offered a Certified Veganic Program for several years. Unfortunately, it is no longer available due to low enrollment.

But this could change. Veganic farmers in North America can join the Veganic Agriculture Network (VAN) mentioned earlier and get better organized. It has the following mission: “It is a movement in North America to promote the production of fruits, vegetables, legumes, and cereals without the use of artificial substances nor the use of animal products. We promote sustainable, low-impact, plant-based farming and gardening.” Perhaps American vegans could persuade the federal government to help. It could create a grant program for veganic research akin to the Sustainable Agriculture Research and Education (SARE) program. And perhaps SARE could dedicate some funds to plant-based agriculture, incentivizing farmers to become veganic. If animal welfare arguments would not be enough to convince the politicians, surely environmental arguments should do.

Regenerative Veganic Agriculture Is the Right Way to Be Holistic

Animal farmers are not going to sit and watch customers abandoning them because of how they contribute to Global Heating and animal suffering. They are going to fight to get them back, telling them that they have changed practices and they are now much more ethical. This is what those who advocate for holistic grazing or regenerative animal agriculture do. The truth, though, is that most of it is just window dressing and greenwashing. They claim animal grazing sequesters enough carbon in the non-cultivated grass soil to compensate for the animals’ greenhouse gases contribution.

However, this has already been debunked by many experts. In 2017, the Food Climate Research Network (FCRN) conducted a two-year review of holistic grazing titled Grace and Confused. An international team of researchers looked at over 300 data sources.  Their conclusions are clear: Carbon sequestered in the soil from grazing only offsets 20 – 60 % of the emissions produced by the animals. And this effect vanishes after 15 years or so when the soil reaches carbon equilibrium and cannot sequester any more carbon. Not to forget grazing uses a quarter of land but only provides less than 2% of the world’s protein.

Think about it. Holistic grazing is meant to replicate some pre-agricultural balanced ecosystems by replacing antelopes or bison with cattle or sheep. But you can also replace those with humans. You can have veganic farmers replicating what these herbivores did. But they can do it using more efficient cunning techniques: no-till, cultivating plants with taproots, planting cover crops, and even using ultra-lightweight robots for less disruptive precision farming.

In the last few years, I have been living in a small ground floor apartment in South London. I share a yard with a handful of neighbors that has a bit of exposed soil. On it, I run my minuscule private regenerative veganic agriculture operation. I started this when I could not find any local veganic produce’s supplier.

So far, I have successfully harvested potatoes, zucchinis, lettuces, eggplants, tomatoes, kale, cucumbers, strawberries, runner beans, carrots, beets, bell peppers, and lentils. I create my fertilizer with nettles, comfrey, and discarded leaves. And I plant various things every year from the seeds of previous years.

I love doing it. It’s very rewarding, especially because I share the food with the local wildlife. If I find insects or mollusks eating the plants, I carefully remove them from one plant and place them in another, so I can eat one and they can eat the rest. And if they get more than I, instead of feeling frustrated I feel good for them – permaculture’s freeshare style!. I know that my veganic operation cannot completely feed me and is not yet sustainable, but at the very least my yard is sequestering more carbon now than when it was bare. I imagine the global impact if each of us tried to do the same in whatever space available we have in our homes?

It’s not only about eating a plant-based diet, but it’s also about producing plants in the least harmful way for wildlife, farm animals and the environment. We all can contribute to the solution.