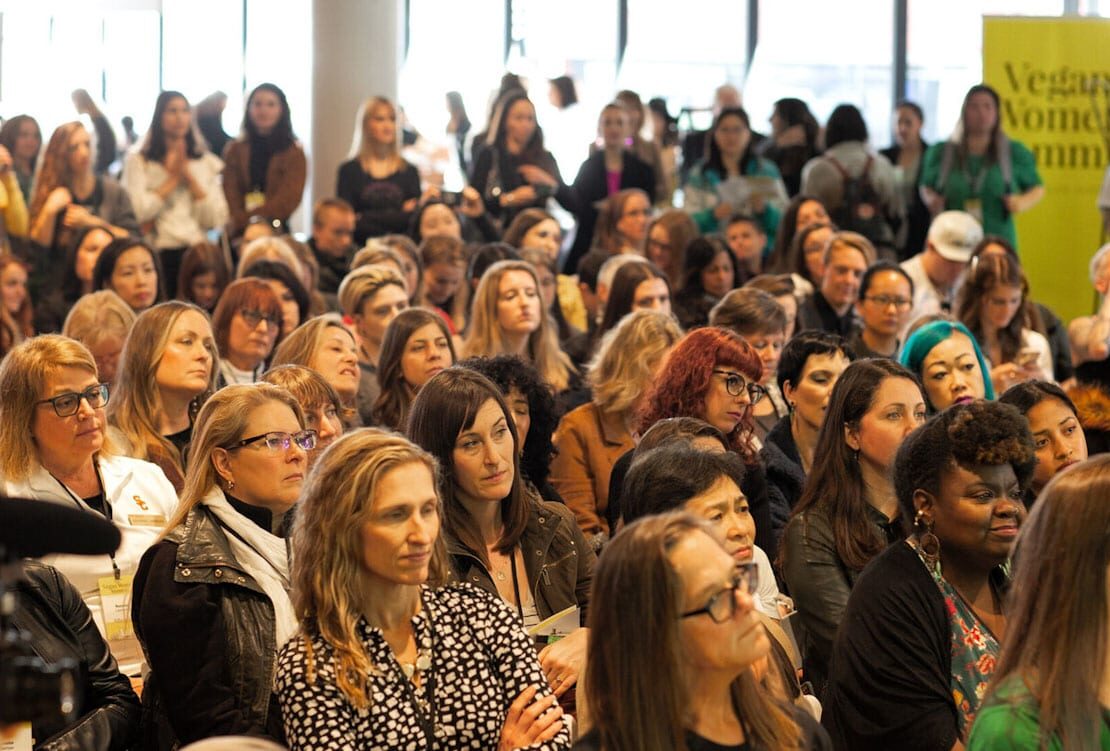 Polls show that the majority of vegans everywhere are women. They are also the majority of customers of vegan products. So women should be in the driver’s seat when it comes to running the vegan business world too, right?  Not quite… at least not yet.

Sure, some of the most famous names in the plant-based food space are women. Exhibit A: Miyoko Schinner, founder/CEO of the wildly success Miyoko’s Kitchen, maker of exquisite vegan cheeses and butters. And, there’s Jenny Goldfarb, who wowed Shark Tank with her Mrs. Goldfarb’s Unreal Deli pitch and whose vegan pastrami has become world famous!  Still, vegans must make their way in the real world and that sometimes means encountering gender bias.

According to a Vegan Women Summit™ survey, most vegan female founders of  plant-based and cell-based food startups who responded to the query say they’ve run into gender bias in the corporate arena. But, now, vegan women business owners are getting organized and finding strength in numbers.

This Vegan Pack Is Taking The Power Back!

In fact, the next Vegan Women Summit is in Los Angeles on April 8th, 2022!

Jennifer Stojkovic is a Canadian vegan activist and businesswoman now based in California. She has consolidated the leaders of the food industry to create awareness for women. She launched a Future of Food series of partnerships in 2018, bringing together CEOs and founders from leading tech brands. In early 2020 Jennifer founded the Vegan Women Summit™. In July and August of 2020, it polled 160 female-identifying founders at plant-based and cell-based food startups around the world. The survey results called attention to disparities in the food tech industry concluding that gender and racial bias skew investment and innovation in this emerging market. Now that they’ve identified the problem, they plan to tackle it as a group. Elysabeth Alfano interviewed Jennifer for her Plantbased Business Hour (together with Shark Tank’s founder Tanya Oseguera, from Mexico).

The Champion of Vegan Female Founders

Jennifer explains how she ended up being the champion of vegan female founders all over the world:

“I have been vegan for six years and my only regret is not doing it sooner. It was a moral thing for me. I think that if you become plant-based for ethics there is no going back. You are vegan for life because you are understanding there is an entire world around you. And you have no right to invade that world. “

“Like many in San Francisco, I went West with my career and worked in the tech industry. I’ve been working in tech for half a decade or so. And my work has really been at the forefront, doing advocacy and policy work with all of the larger brands in the world. Everyone from Airbnb to Google and Microsoft.”

“In San Francisco, we have seen a huge explosion not just of tech but of food tech. I really noticed in the last few years that food tech is really becoming the next big tech industry.”

“After a little bit of that work, I discovered pretty quickly that I was seeing the same kinds of founders over and over. And, unfortunately, all big investment companies from the Bay area in California generally were all male-led. That is kind of shocking. Especially considering that women are the main consumers and they make more than 90% of purchasing decisions. We know that, especially when it comes to vegans, more than 80% are typically female, according to most of the surveys. I knew that something was a little  amiss there.”

Jennifer realized that the best way to address the problem was to get all the vegan female founders together and to do some research to find out how serious the problem is. She has developed support and mentorship programs that are available to all women entrepreneurs.

“We have been building Pathfinder, which is the world’s first female founders summit and pitch competition dedicated exclusively to plant-based innovation — including food, fashion, beauty, AI, all kinds of really cool technologies.”

The Vegan Women Summit® (VWS) is a global events and media organization created to empower women to build a kinder, more sustainable world. It hosts events to foster a community of strong, ambitious rising leaders working to bring compassion to their careers. The VWS premiere event, the summit itself, took place in San Francisco, on February 1st, 2020. Apart from the networking potential, it also allowed women founders to pitch their products and compete for a cash price.

The Survey with Shocking Results

Thanks to the summit, Jennifer managed to meet enough vegan female founders from all six continents to conduct the survey. The results are shocking:

“In terms of the bias, the most significant one we saw was gender bias. 3/4 of women cited gender bias. And even more shocking is that 43%, just under half of all the funders of color, faced racial bias… Some of the stories we heard from funders were just shocking. It was everything from ‘every time I walk in a room an investor asked to speak to the CEO because they assumed I am the assistant or the aid’, all the way to ‘I had investors following me to my hotel room.’

“There is a lot more systemic change that needs to happen before we can really correct this imbalance.” – Jennifer Stojkovic, founder of Vegan Women Summit

Vegan Female Founders are the Future

Both Elysabeth and Jennifer agreed on this. Even if only 3% of investment dollars have traditionally been going to female-led businesses, the future of veg tech lies with vegan female founders and investors. They are now growing in numbers. Jennifer breaks it down:

“We were very excited to see that almost 2/3 of the female founders we spoke to are getting ready to raise in the next year. 59% are aiming to raise $1 million or more, and more than 10% are going for $10 million or more.”

Speaking about 2020, Jennifer said: “This was a record year for women becoming investors at all levels, in particular women of color. There has been a huge surge of black funded firms. There’s a ton of women jumping into the game.”

“The thing I like to remember is, from the tiny little ants and little lizards outside, everybody is trying to get through the day and just want to have a warm place to sleep at night and food to eat. Whether you are human or a little, tiny bug. Keeping that in mind as you go throughout your day, being mindful, I think that’s extremely important.” – Jennifer Stojkovic, founder of Vegan Women Summit