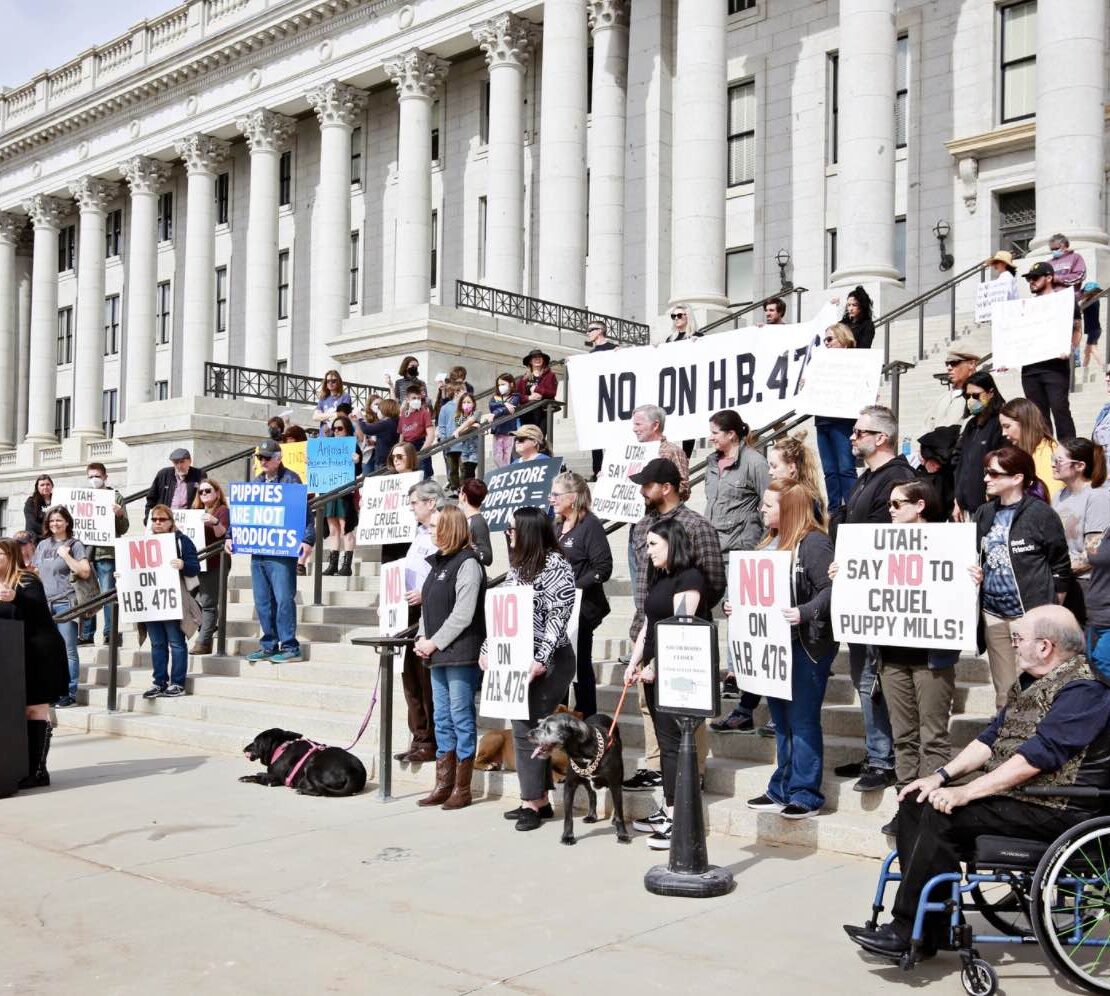 Utah’s controversial Animal Enterprise Bill 476, which would have destroyed many animal protections, is dead after protests.

Animal welfare advocates are proclaiming victory after the stunning defeat of a bill that was being fast-tracked through Utah’s state legislature. Critics said the bill would have severely jeopardized any advances in animal protection that have been achieved in the state. On February 24th, 2022, Republican Rep. Joel Ferry, a farmer and rancher, introduced the Animal Enterprise Protection Bill (House Bill 476) in Utah. It went to the House Rules Committee the same day. The very next day it went to the  Natural Resources, Agriculture, and Environment Committee. In short order, the bill was passed in the House chamber and was racing to the Senate side.  The Intercept warned, “The bill could become the most extreme state law in the country restricting regulations on businesses that exploit animals.”

Then Protests Erupted On the Steps of Utah’s Capitol Building

Animal advocates described themselves as terrified over the implications of the bill. It seemed destined to pass until a coalition of groups led by the Humane Society of Utah organized a protest on the steps of Utah’s capitol building. News media showed up and, suddenly, the fast-tracked bill hit a major roadblock: TV news stories about public opposition.

Here’s how the controversial bill spelled out its vision for Utah. The bill “prohibits a municipality or a county from adopting or enforcing an ordinance or other regulation that prohibits or effectively prohibits the operation of an animal enterprise or the use of a working animal.” It defines Animal enterprise as: “a commercial or academic enterprise that uses or sells animals or animal products for profit, food or fiber production, agriculture, education, research, or testing.  It includes “an animal competition, aquarium, circus, exposition, fair, farm, feedlot, furrier, retail pet store, ranch, rodeo, zoo, or an event intended to exhibit or advance agricultural arts and sciences.”

Critics say, if it had passed, any local government (city, town, metro township or county) would not have been be able to ban any activity that kills or harms animals in any way, as long as they did it for profit and it is not against state or federal law.

Dr. Crystal Heath is a shelter veterinarian from Berkeley, California. She founded Our Honor, to amplify the compassionate voices of veterinarians who want to speak up for all animals. Here’s how she described House Bill 476 before it died:

“The intent of this bill is to make null and void a lot of progress the whole animal protection movement has made in Utah. It would allow horse-drawn carriages to return to Salt Lake City streets and cruel circuses to return to our county facilities. It would nullify 12 local ordinances throughout our state — that Best Friends has helped pass — that make it illegal to sell puppies bred on inhumane puppy mills. It also stops any future efforts of the animal protection movement on the local or state level including efforts to rein in polluting, cruel, factory farms or mink fur farms.”

Joyous Reaction to the Bill’s Defeat

Says Dr. Heath, “I am very happy the bill is dead. The protests really sent a message to the politicians that people are watching and they have to prioritize the best interests of the public and the animals and not just corporate interests. It’s a victory for the animals and let’s hope something like this doesn’t come up again in the future. We have to stay organized and together so that, when these things come up, we can act and stop them and protect the animals. We have to watch for such bills popping up in other states and we have to stay vigilant against these powerful corporate interests.”

Critics say the bill was so broad it entered the realm of the absurd. Says Dr. Health, “It would make it illegal for local health departments to inspect or regulate food. Any business that wants to evade local regulations could simply start selling some leather trinkets in addition to its core business activities to qualify as an ‘animal enterprise’ and gain the protections of this law.” — Dr Crystal Heath, veterinarian

During the reading at the Agriculture Committee, Rep. Joel Ferry said about the bill that “a city or a county can still make regulation on how many chickens you might have in your backyard, how many dogs you can have at your house, how many cattle you can have in your backyard, whatever it is. They can still make those kinds of regulations. But on the actual commercial husbandry practices, that’s what we want to make sure that we have a uniform standard statewide that will be administered by the Utah Department of Agriculture and Food.”

A Bill Against Using Bans to Protect Animals

Dr Heath warns, “This bill shows just how powerful corporations are in influencing our politicians for the benefit of their own interests at the expense of people, animals and the planet… A lobbyist for puppy mills and breeders spoke before the Ag committee. And he said this bill was needed because California has passed regulations driving puppy mills out of that state, and their trade group wants to set up shop in Utah.”

The Intercept points out that this onerous bill came up as Utah is in the throes of an animal rights campaign that has gotten a lot of attention. “All this takes place as Utah is prosecuting two activists for liberating two dying piglets from terrible conditions at a Smithfield Foods factory farm. At a pretrial hearing in that case… a Utah judge ruled that the activists wouldn’t be allowed to show evidence of cruelty at the facility to a jury.” Critics say that’s telling the defendants on trial they cannot even discuss their motive: ending animal suffering.

UnchainedTV will bring you reports on the trial of those two activists.