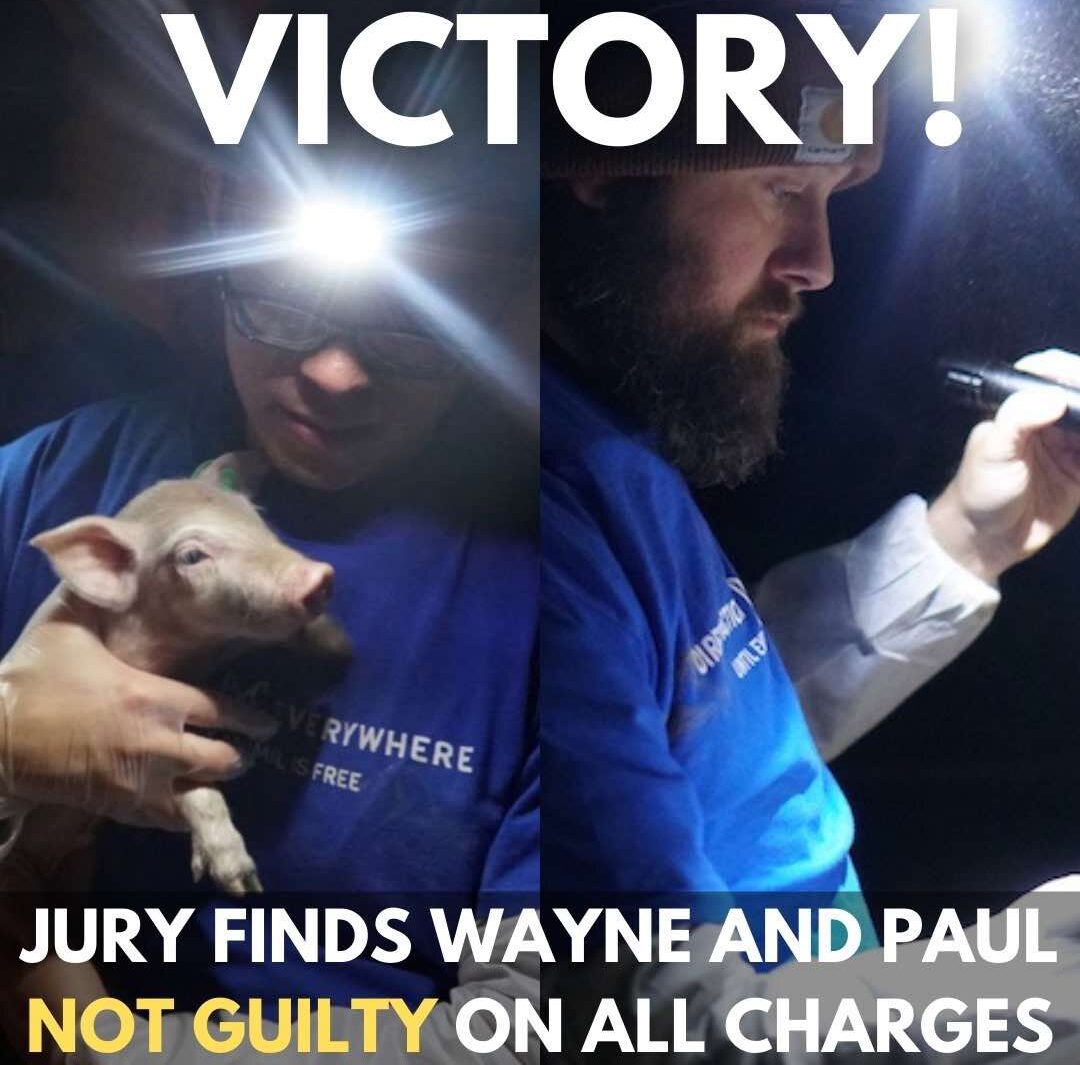 DxE ANIMAL ACTIVISTS NOT GUILTY ON ALL COUNTS! History was just made as two Direct Action Everywhere animal activists – part of a team that rescued two very sick piglets from a massive Utah factory farm – were found NOT GUILTY on all counts by a Utah jury.

Los Angeles, California, October 10th, 7am – UnchainedTV was LIVE for the entire #SmithfieldTrial, logging 16+ hours of live-streaming with an extraordinary expert panel! The vegan TV network was LIVE before, during and after the verdict and caught the ecstatic reaction from the defendants and their supporters outside the courthouse. DxE co-founder Wayne Hsiung spoke to UnchainedTV LIVE moments after his not guilty verdict. We asked him: what message does this verdict send to the animal agriculture industry? Listen to Hsiung to find out what he thinks.

The final day of the trial was a nerve-wracking one, with the jurors deliberating for most of the day before coming back with their decision. Hsiung, and fellow DxE member Paul Picklesimer, each went into the trial facing two felony burglary counts and a misdemeanor theft charge, initially facing over a decade in prison. During the trial, one of the burglary counts was dropped. But, as the jury retired to deliberate, they still faced over five years in prison for removing two extremely sick piglets that even the prosecution said were worth less than $100 combined. The video below is fascinating because it includes LIVE interviews with Hsiung and Picklesimer BEFORE they verdict – when they did not know if it would be their last day of freedom for years – and AFTER the verdict, where there was a spontaneous celebration outside court as the two men emerged victorious, hugging and high-fiving the many Direct Action Everywhere supporters who’d traveled to Utah to observe the trial.

Open Rescue: The Time has Come

The defendants, both part of an advocacy organization named Direct Action Everywhere, argued for their right to rescue the animals from suffering, much as someone would be hailed as a hero for breaking into a hot car to rescue a suffering dog.

The massive pig breeding facility, which the defendants characterized as the largest in the world, was described this way by the New York Times: “The film shows sows with bloody and mangled teats; pregnant sows gnawing on the bars of the narrow stalls they live in until they give birth; and piglets clambering over and nibbling dead siblings.”

Beyond the crucial issue of the gruesome treatment of animals in massive industrial facilities, aspects of the trial raise concerns about fairness within the justice system. Astoundingly, the jury was not allowed to view the video of the alleged crime in progress. In order to avoid accusations that the footage presented a distorted impression of the facility, the video  – titled Operation Deathstar – was recorded by the defendants utilizing a 360 degree virtual reality camera system.

Impact of these Not Guilty Verdicts on the Animal Rights Movement?

Defendant Wayne Hsiung – who chose to represent himself in court and is also an attorney who taught constitutional law – spoke LIVE, post-acquittal, to UnchainedTV’s Velez-Mitchell. He said, “This is the first domino, legally, because if we have the right to rescue these two animals, we have the right to rescue the rest, and that’s where we’re going.” That prediction, if true, would mean this legal victory is a major turning point in the animal rights movement. Jurors in a conservative, largely agrarian state sided with animal rights activists and against a huge corporation. Is raises the question: Is the societal shift regarding the brutal treatment of farmed animals hitting a tipping point?

Why Wasn’t This Trial on ALL the National Cable TV News Networks?

The acquittal, characterized by The Intercept as “historic,” was also covered by The New York Times, AP, local TV news stations, and some other print outlets. But, it appears to have been completely ignored by advertiser-based national cable TV news networks, whose advertisers are largely fast food and pharmaceuticals, two industries that profit off of the consumption of meat and dairy.

“The public has a right to know about the horrific treatment of animals behind closed doors. Despite efforts by multi-billion dollar industries, the truth is getting out and the caring public is becoming increasingly appalled by industrialized animal agriculture,” said UnchainedTV founder Velez-Mitchell, adding, “The U.S. Supreme Court is about to consider a pork industry challenge to California’s Proposition 12, which takes aim at cruel farmed animal confinement practices. This is news and needs to be reported. So, if the TV networks won’t, we will.”