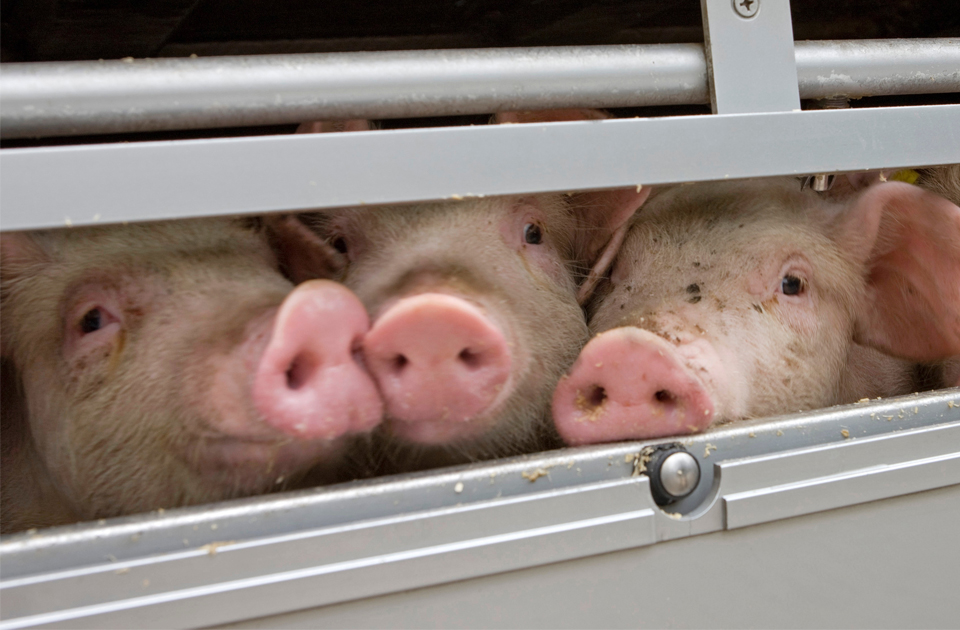 Winter temperatures wreak havoc on animals at the mercy of the U.S. farmed animal transport system.

Los Angeles, CA, December 8, 2022 9:00 pm — The northeast of the United States is experiencing a severe winter with bouts of freezing temperatures and heavy snowfall. Despite this, many pigs, cows, chickens, and turkeys are being transported in open-air trucks. In conditions like these, many millions of farmed animals die of hypothermia on the road to slaughter. During severe weather,  slaughter-bound trucks can end up stuck on the freeway for hours — what the industry calls supply chain disruption — which explains how many animals freeze to death.

The Guardian estimates more than 20 million animals die every year in the U.S. in transport. The publication says it arrived at this figure by analyzing  U.S. Department of Agriculture data.  According to the Guardian, “Approximately 20 million chickens, 330,000 pigs and 166,000 cattle are dead on arrival, or soon after, at abattoirs in the US every year, analysis of publicly available data shows. A further 800,000 pigs are calculated to be unable to walk on arrival.”

But, none of this is illegal because this is how the U.S. farmed animal transport system works.

Mercy for Animals is an animal protection organization that is urgently mobilizing its supporters to change this.  Alex Cragun, Mercy for Animals’ Director of Government Affairs and Public Policy (GAPP), talked to UnchainedTV’s Jane Velez-Mitchell and explained what people can do to help. You can watch the entire conversation here:

Alex Cragun has more than a decade of experience in nonprofit government affairs, public policy design, grassroots organizing and campaign management. In his spare time, he is pursuing his Masters of Public Administration at the University of Utah. He describes the U.S. farmed animal transport system as shameful.

“It’s absolutely atrocious that more than 20 million animals die every year in transport. The article in the Guardian explains that the conditions are absolutely horrendous. There’s no appropriate spacing with regard to species. The animals are cram-packed. They’re not able to turn around. They’re not able to lay down. They don’t have access to food or water while in transport… Something needs to happen.”

In the hot months of summer, temperatures inside trucks rise to well over 100°F. So, many animals suffer heat stress, asphyxiation, and heart attacks. In winter, though, the freezing cold is what gets them.

“The idea of being in this sort of weather that you’re experiencing in the northeast without access to a heater, and without access to any sort of insulation, it’s just barbaric. We can do better as a society.”-Alex Cragun, Mercy for Animals

Mercy for Animals has put out a petition and is encouraging everyone to sign it. It directly calls on the USDA and the Department of Transportation to create standards for farmed animal transport. The petition can be signed at mercyforanimals.org/transport. Critics say the animal agriculture industry does not have any incentive for improving the farmed animal transport system because the insurance companies cover losses incurred due to extreme weather. Mercy for Animals wants the U.S. government to intervene. Cragun explains:

“We’re asking the USDA and the Department of Transportation to establish standards with regard to animal transport. Appropriate spacing for species, ensuring that they have regulations around food and water, and ensuring that there is some process in which folks who are breaking those laws can be potentially held accountable.”

In the U.S., there are very few regulations guaranteeing minimum animal welfare standards during transport. And the very few rules that exist are very out of date. For instance, the 28-hour rule is a federal law that allows animals to be in confined situations without access to climate control for up to 28 hours. Cragun explains how inadequate the system is:

“As a country, we don’t have a solid infrastructure on this. There are only five places here in the United States in which animals are able to be unboarded from these transport vehicles, get access to water, get access to food, have access to shelter, and rest. We need to do more.”