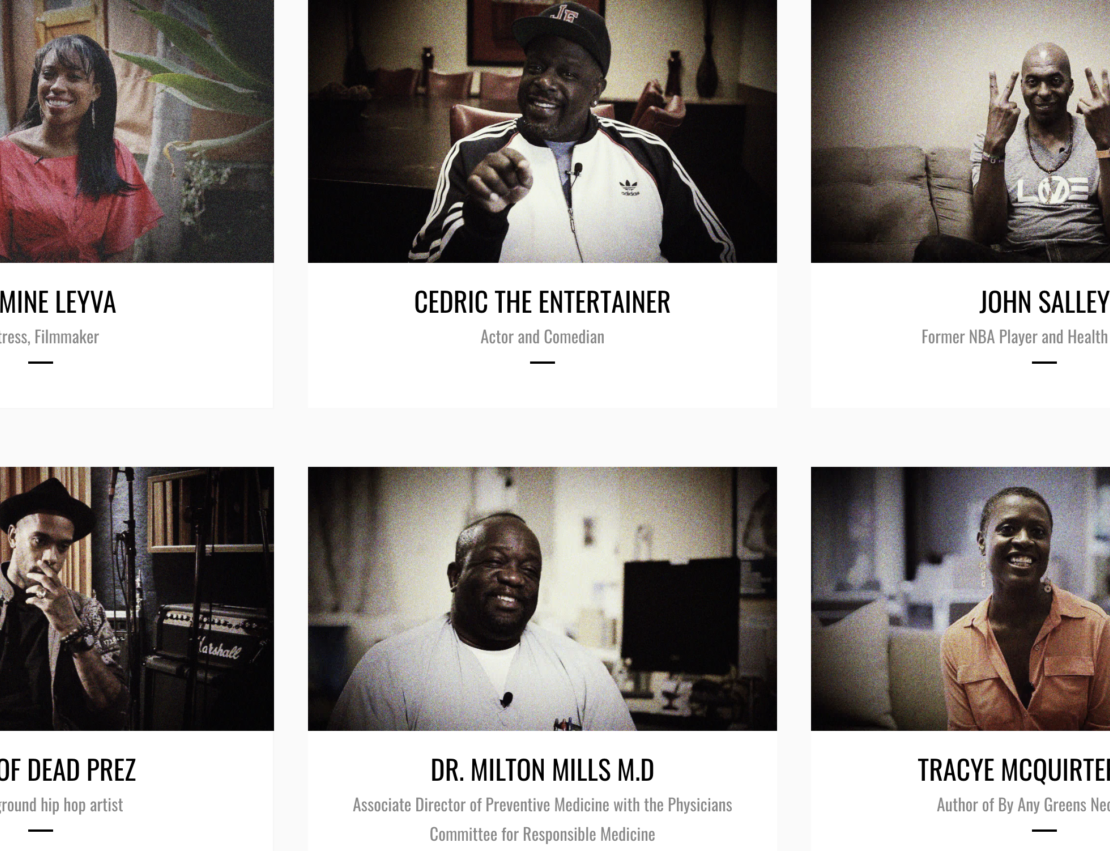 For health, for climate and for food justice, African Americans are now being recognized as the fastest growing segment of the vegan movement. Citing a Pew survey, Mercy for Animals reports that while only 3% of Americans overall identify as vegan, 8% of African Americans say they’re vegan. Just below, you are going to meet some of the leaders in the movement. Find out what led each of them to adopt a plant-based diet and devote their lives to urging others to do the same.

One of America’s most prominent black vegans is Dr Milton Mills, who is featured in the hit documentary What the Health, which you can see on Netflix. Dr Mills also appears in the inspiring documentary The Invisible Vegan, now streaming on Amazon Prime. The featured image on this article is from that film’s cast list. Dr Mills explains why humans are not designed to eat animals and why, for many reasons, it is against the self-interest of black Americans to eat the standard American diet of meat and dairy. Listen as Dr Mills makes the connection between racism and the food system.

Dr Mills practices urgent care medicine in the Washington DC area, and has served previously as Associate Director of Preventive Medicine and as a member of the National Advisory Board for Physicians Committee for Responsible Medicine. He’s contributed to position papers presented by PCRM to the United States Department of Agriculture regarding Dietary Guidelines for Americans, and served as the lead plaintiff in PCRM’s class action lawsuit that seeks warning labels on cow’s milk. Dr Mills earned his medical degree at Stanford University School of Medicine, and completed an Internal Medicine residency at Georgetown University Hospital.

Dr Ruby Lathon, a certified holistic nutritionist, offers nutrition courses, wellness seminars, workshops and coaching to bring out the superwoman or superman within you that’s being debilitated by the dietary kryptonite called meat. Dr Lathon speaks powerfully of her recovery from cancer, which she attributes to her adoption of a whole-food, plant-based diet. Dr Lathon graduated from the University of Alabama and served as Nutrition Policy Manager at the Physicians Committee for Responsible Medicine, where she led a grassroots campaign seeking legislation to bring healthful, plant-based meals into the National School Lunch Program. Here she is interviewed by JaneUnChained contributor Naijha Wright-Brown, the owner of the famed Land of Kush Vegan Soul Bistro in Baltimore.

Charlise Rookwood, Helping Everyone Reconnect With Their Plant-Based Roots

Will Tucker, aka America’s Vegan Trainer, is a leading voice making the connection between a whole-food, plant-based diet and fitness. Based in Arizona, Tucker is living proof that you can get more than enough protein and develop ripped muscles with vegan food. A champion bodybuilder, he’s been featured in many publications including Vegan Health and Fitness.