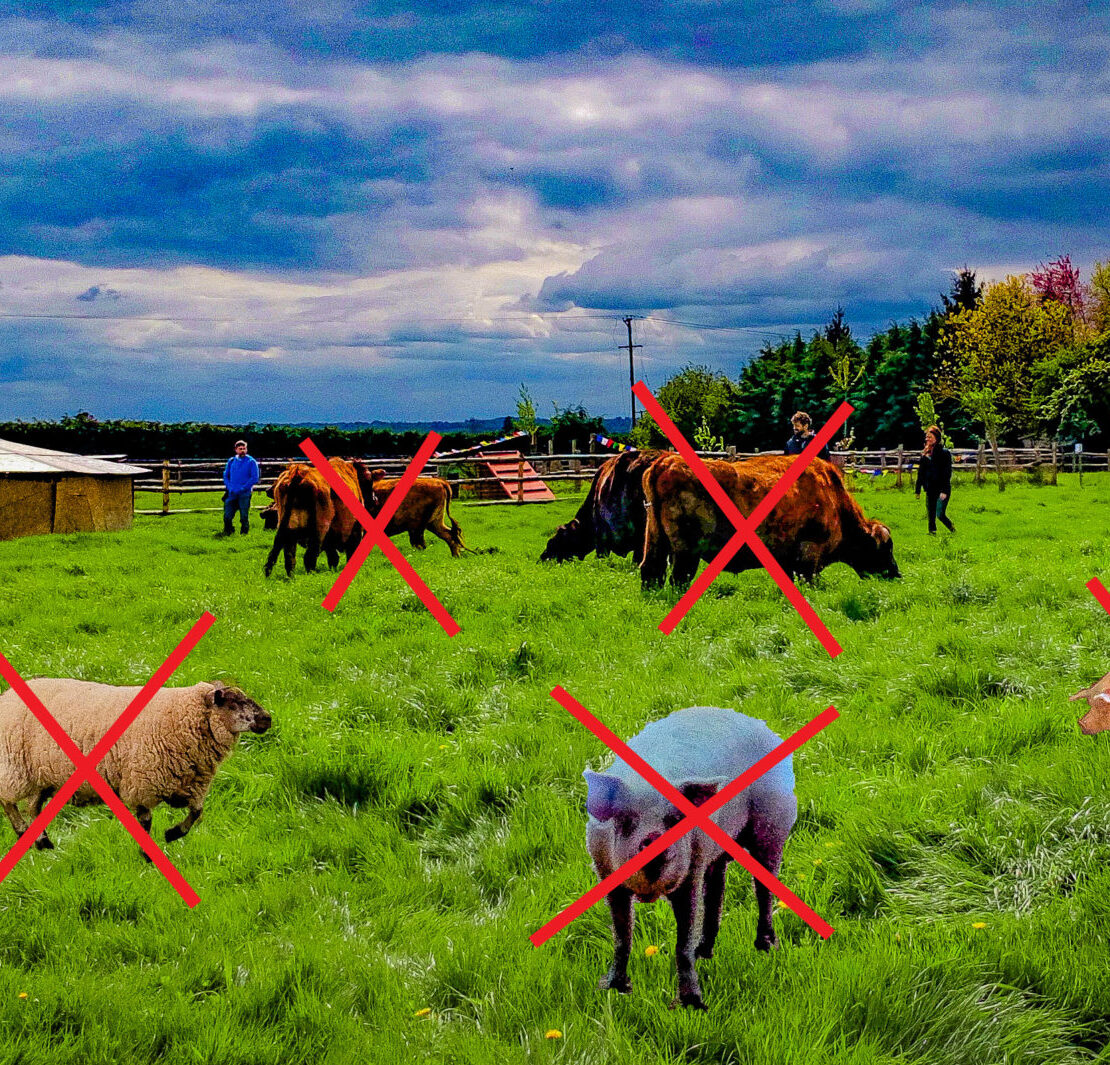 We All Need to Transition to Plant-based Agriculture

Why Is Escaping from Animal Agriculture Crucial?

To solve the global environmental crises, we need to stop rearing livestock. From the arid deserts to the cold arctic, every cow, sheep, pig, or chicken reared for food or fiber is making climate change worse. We’ve destroyed much of the earth’s forests to create cattle grazing land and to grow crops to feed 80 billion farmed animals slaughtered yearly.

Every tree, bush, or plant grown to replace animal grazing land could lessen the climate crisis. Why? Trees absorb carbon, the leading greenhouse gas. If we return grazing land and farmland back into forests, those reforested regions could sequester, capture and absorb the gases that raise the earth’s temperature. And, eliminating animal agriculture would also eliminate huge amounts of two other climate-crippling gases, methane and nitrous oxide, produced by the animals and their waste. All this would help lower the earth’s temperature, something the human race desperately needs to accomplish to avoid catastrophically high temperatures that will spark an ecological collapse…and soon!

Ending Animal Agriculture Would Solve the Climate Crisis. But, Experts Refuse to Look at This Solution!

We all live on the same planet, so all cultures and nations must get together and take meaningful climate mitigation actions immediately. But, when we try to discuss the need for a global shift to plant-based diets, all we hear are excuses. Unrealistic, say the meat-eating climate gurus defensively.  When we advocate for transitioning away from animal agriculture to plant-based farming, skeptics dismiss it as impossible, claiming much of the world’s land is only suitable for grazing animals, and nothing else.

This is not true. There are many ways to stop rearing livestock and still make a decent living from your land. Now, Rebecca Knowles has listed at least 100 ways. Rebecca is the founder of Farmers for Stock Free Farming and Vegan Outreach Scotland. She has lived both in the arid New Mexico plains and the cold Scottish highlands, so she knows ways to flourish on hardscrabble land.

I was very impressed when I saw her contribution in the latest Rancher Advocacy Program (RAP) Summit on switching from animal to veganic farming, where farmers seek to avoid using animal manure as fertilizer to grow vegetables, fruits and grains that are truly animal free. I decided to interview her, and ask her about all this.

The Long Journey from a Butcher Family to Vegan Campaigner

Rebecca is from Scotland and currently is a therapist, offering psychological counseling. But her journey to veganism is a long one. Despite coming from a family steeped in animal farming and butchering, she became a vegan activist. Rebecca explains:

“I am from a farming background and my granddad, his father before him and then my auntie, they are all butchers.  Three generations of butchers in my family.”

She went through some career changes, becoming a teacher in Japan, a vegetarian in India, a vegan in New Mexico, and a campaigner back in Scotland.

“I moved to America, and I lived in New Mexico. I lived in a very dry, arid place for 18 years. There, I joined the vegetarian Society of El Paso. I was at one of their events talking to a gentleman, a lovely octogenarian. He said, ‘actually I am a vegan.’ I became a vegan right there on the spot. That was 2008.”

“Then we moved back to Scotland in 2014-2015, to the Highlands. I made a leaflet about spring lambs and I just went by myself into Inverness on a street corner giving out the leaflet, talking to people about the lambs.”

“I started ‘Vegan Outreach Scotland’ in the spring of 2015. We’ve got 1500 members now, and four branches in Scotland.”

In 2018, the UN’s IPCC (Intergovernmental Panel on Climate Change) published its special report 1.5 C on climate change. The same year, Oxford University scientists Joseph Poore and Thomas Nemecek produced a report stating that the shift to a plant-based diet will reduce food’s greenhouse gas emissions by up to 73%, and land use by 76%. This inspired Rebecca and her team to begin lobbying politicians for a change in the food production system. She told me how hearing the same tired excuses from politicians made her create Farmers for Stock Free Farming:

“During 2018 and 2019 we were lobbying for the shift to a plant-based diet. Through our lobbying, my colleague Amanda and I were meeting with two of the Members of the Scottish Parliament (MSPs). One has one of the biggest egg production facilities in Scotland. He stopped us and he said, ‘Do you know what? If you shift to a plant-based diet you are going to put 60% of Scottish farmers out of business.’ We knew he was wrong, but we knew we had to prove it.”

When Rebecca started investigating ways Scottish farmers could thrive on their land without rearing livestock, she found more than 100 alternatives. In 2020, she put them together on a website and now is helping many farmers to transition to them. It shows three roads farmers can choose to thrive without livestock:

“The three routes are growing crops for human consumption, restoring native trees and ecosystems — rewilding essentially — and the third one is diversifying into non-traditional agricultural enterprises — those related to tourism, retail, alternative energies, outdoor activities, etc.”

“In the UK we have enough existing arable land to provide for the caloric, nutrient, and protein needs of the entire human population. If we actually use that land for growing food for human consumption, we can provide for ourselves. In the UK, 55% of arable land is used to grow food for livestock. In Scotland, it’s around 50%… which is crazy”.

“We are really pushing out. We’ve got a new Green MSP, Maggie Chapman, who is vegan, and she is very supportive.” – Rebecca Knowles, vegan campaigner.

The Easiest and Most Surprising Alternatives to Rearing Livestock

I asked Rebecca what are the easiest and the most surprising ways to stop rearing livestock in her 100 list:

“The easiest way to go stock-free in Scotland is to start using our arable land to grow food for human consumption, and then allow the permanent grassland and the rough grazing land to basically rewild. We let it go once we get the sheep and the cows off it. Paying farmers to let their land go. In other words, to farm carbon capture. You grow stuff and it sequesters carbon.”

She told me about the Monks Wood Wilderness, a very successful rewilding project in England based on leaving a large field alone for 50 years. It’s full of trees now.

“If you do leave the land alone Mother Nature will do what she does best. Restore herself.” – Rebecca Knowles, vegan campaigner.

“The most surprising way of the 100 ways is the Leafu: Leaf protein concentrate. Basically, it’s extracting the protein from any edible leaves. it has a protein content of 48%. Beef is 31%. You can produce a tasteless colorless version of it, like tofu. And then you can use it in veggie burgers or as an egg substitute. This could revolutionize Scottish agriculture. If you got a feel of grass and Clover you can make Leafu from that instead of grazing cows and sheep. That’s one thing we are very excited about.”

Geography Should Not Trap You into Rearing Livestock

“I don’t think geography matters. Not in any of the places I lived anyway. There is something on our website about rethinking food in agriculture 2020-2030, from the Rethink x Project.  They’re talking about brewed protein from fungi, algae, protozoa, etc. Anywhere where we can brew beer, we can make protein. And they are predicting that by 2025 the protein they can brew will be more nutritious, more varied, and cheaper than animal protein. We can brew beer pretty much everywhere so we can brew protein anywhere. Even in a desert.” – Rebecca Knowles, vegan campaigner.

The Shetland Islands are at 60.5° N, the same latitude as Alaska or Siberia. Even there you could grow food:

“In the Shetland islands, they designed this thing called the ‘polycrub’. It’s built storm strength for Shetland. It’s perfectly possible to grow food like that everywhere. And if you look at the islands now there is only sheep. But they used to grow oats and hemp there. There is history that hemp was grown in the Isle of Lewis in 1771. It grows on marginal land.”

“Farmers are willing to change. They are ready to change. They know they’re going to have to because the subsidy system is changing.” – Rebecca Knowles, vegan campaigner.

We all need to change and do it immediately. Climate change is here now. Fires, floods, drought.  And, it’s getting worse fast. The human race cannot afford to ignore the plant-based solution.  Our lives depend upon us making this shift.