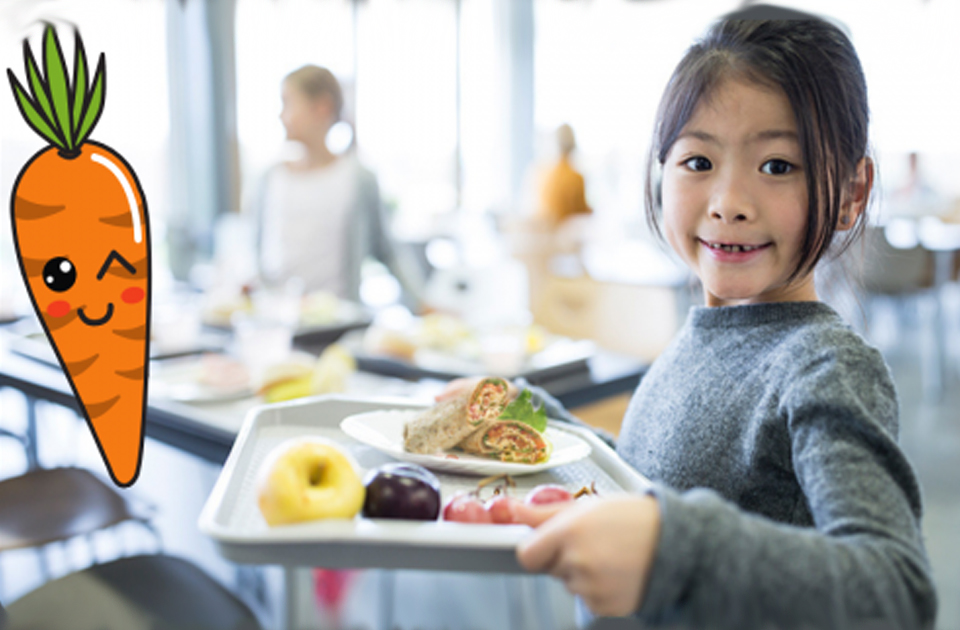 If something happens in California, you know it’s going to have an impact around the country, right? If we want to bring vegan meals to schools across the US, best to do it first in California. This is precisely what Judie Mancuso, the founder and CEO of Social Compassion in Legislation (SCIL) is trying to do. Create a law in California that incentivizes plant-based meals in schools. With her experience in achieving legislative advances for the animals and the planet, she is likely to attain this goal too. Click here and sign up to help pass this crucial bill, which goes before the full California Assembly in just days!!!

The animal agriculture industry is a leading contributor to our current climate change crisis and our accelerating health crisis. The carbon footprint of meat and dairy is exponentially higher than plant-based meals. As for the health of our kids? Our meat and dairy laden fast food culture is getting millions of kids off to a tragic start. “Both obesity and diabetes are epidemic health problems. Obesity affects about 12.7 million children and teens in the United States,” noted The Endocrine Society in 2017 adding, “Children with obesity face four times the risk of developing type 2 diabetes compared to children with a body mass index (BMI) in the normal range, according to a study published in the Journal of the Endocrine Society.”

One straightforward solution is to feed a nutrition-packed whole food, plant-based diet to our school children. Our hopes for creating a new paradigm rest with the next generation. Today’s healthy, plant-based children will become tomorrow’s politicians. If we can’t even feed nutritious, low-carbon footprint meals in our schools, what sort of message are we sending?  Judie Mancuso is on a mission to right this injustice.

UnchainedTV’s Jane Velez-Mitchell interviewed Judie Mancuso about this crucial bill and many others. You can read the highlights of the conversation in this article. And, you can watch the entire interview at the bottom of this story. Shortly after the interview aired, we learned that Judie Mancuso had just announced that she is running for the 72nd Assembly District in north coastal Orange County, California.

The Bill to Bring Vegan Meals to Schools

Judie started in the field of information technology, leading teams of engineers to develop enterprise-wide business software systems. Then, in 2007, she founded Social Compassion in Legislation. SCIL works to protect animals and the environment through public policy advocacy in California and beyond.

Named as one of the most influential people in Orange County in 2019, Judie is currently Vice-Chair of the City of Laguna Beach Environmental and Sustainability Committee. She formally served two terms as a public member of the California Veterinary Medical Board. Judie and her SCIL team have spearheaded over 54 state bills. This includes 19 that have been signed into state law. She told Jane what the vegan meals to schools project is about:

“It’s been a very long time since we’ve all been in school. But it doesn’t sound like anything has changed. It’s still the processed meat and cheese, and white bread, that they served us when we were kids. It’s still going on today.”

“We have a bill. It’s called Assembly Bill 558 and the author is Adrin Nazarian from the Los Angeles area in the San Fernando Valley. We started the bill last year, and because of COVID, nothing at the legislature has been the same. A lot of bills got dropped. We’re very fortunate that this one was turned into a two-year bill that we could pick back up this year. What it does is incentivize schools to provide plant-based lunches, food and beverages, for children.  It’s an incentive that pays them 20 cents more for the plant-based meal and 10 cents more for meals that include a plant-based milk option. And that way, there’s not a downside to them making these special lunches.”

Bringing Plant-Based Meals to Schools Is Also About Health

Many people don’t realize the social injustice inherent in giving animal-based diets to children at schools. For instance, many of them are lactose intolerant, yet they are virtually forced to drink cow’s milk, which is strongly pushed in public schools.

“Back in the late 80s, I used to have stomach aches all day long. After I had lunch, usually. I was vegetarian at the time and I just didn’t understand it. I went to doctor after doctor, and they kind of wrote it off to stress. Then I learned how the dairy cows were kept. And about the connection with veal. I decided to give up dairy for ethical reasons. And, lo and behold, those stomach aches I’d been living with my whole life went away. Never did one doctor ever say, ‘hey, maybe you’re lactose intolerant. Let’s just give up dairy for a while’. So, I stumbled upon it myself.

“The legislators do get it. They did vote for it. However, there are still some that will take the special interest side. Let’s not let anybody else get in the territory here. Let’s try to block it. So, we didn’t get any ‘no’ votes. But, we did have a couple of members who abstained from voting.

“There’s a huge portion of the population that is lactose intolerant. There have to be alternatives and that’s what this is. It’s an alternative. We’re not mandating the program and we’re not taking away anything. It’s adding to and incentivizing.” – Judie Mancuso, CEO of SCIL

Bringing Vegan Meals to Schools Is Also About the Environment

As with any vegan initiative, the implications are multi-dimensional. The vegan philosophy is all about avoiding harming oneself, other humans, other animals and the environment. So, this bill is also about the planet. Jane mentioned the list of foods currently served in schools — meat, dairy, fish, eggs — and how much they damage the environment. Judie explains how her bill covers this issue too:

“There’s kind of two sides to this bill. There’s the nutrition, it’s better for the children. If they choose it, again, it’s an alternative and voluntary. A lot of kids already live this way. So, it’s giving them what they eat at home that they can eat at school. So, there is the nutrition, health, having the choice side of the bill.

“The second side is the environmental impact. Yes, those products that you listed (meat/dairy) that are served at schools have such a higher carbon footprint. And we actually have a chart of the various food and how much GHG they consume. It’s 19 times, 35  times more. It’s just astronomical. There are 500,000 school lunches served in a year in California. Half a million lunches! The impact that we can have, taking just some percentage of those 500,000 lunches and turning them plant-based, can make an enormous impact environmentally.

“A lot of these legislators say: ‘My daughter is a vegetarian; my niece is vegan; my wife is vegan.’ It’s more prevalent in the population, which normalizes it. Since the plant-based industry exploded with its choices of milk, people just prefer it over the fatty, regular cow milk.” – Judie Mancuso, CEO of SCIL

The bill passed two committees and on January 27th  it will be voted in the full California Assembly!

If it goes all the way, bringing vegan meals to schools may become the norm. Here’s how Judie says you can help.

“The biggest way to help right now is to come to our website which is SocialCompassioninLegislation.org, and sign up for our newsletter and help us to get this through.

What happens is we collect all those support letters — we do not sell your data, we don’t share it, we don’t give it to anybody but the legislature — and we send these letters to the committee where the next hearing is, which will be in California Senate, if it passes the Assembly.”

“What’s so impressive about the letters is that it shows the diversity of support.  We get support from every nook and cranny in the state, out of the state, out of the country, because when California passes a bill, it is copied in other states, in other countries. So, people are watching us from all over the planet and they can participate in sending these support letters. And, then, it goes on and the committee can see 1,000 letters came in from this.

We have good news. On 27 January, 2022, the bill passed the full Assembly with an initial vote of 47-7. After 3 years since it was presented, the Child Nutrition Act of 2022 (AB 558), authored by Assemblymember Adrin Nazarian and cosponsored by Social Compassion in Legislation, Physicians Committee for Responsible Medicine, Factory Farming Awareness Coalition, and Friends of the Earth, has successfully reached one of its most important milestones.

The bill now moves to the Senate, where it will first be heard in the Education Committee. Keep writing letters and lobbying your representatives, and you haven’t already, please sign a support letter!