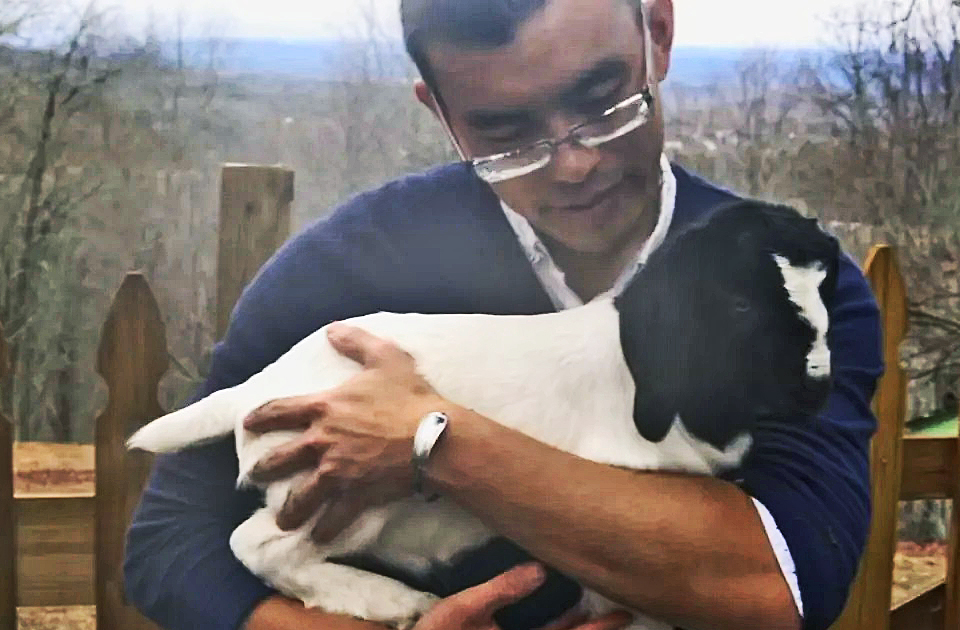 Animal rights activist Wayne Hsiung, recently convicted for rescuing a goat, has been fighting in court to get his evidence admitted.

Attorney and animal rights activist Wayne Hsiung was recently convicted in North Carolina. Now, he faces another trial in Utah that could land him in prison for a decade. In both cases, Hsiung videotaped his own “crimes” which involved rescuing animals. In both cases, the courts are denying him the right to show the very evidence of animal cruelty that reveals his motives.

Hsiung, the co-founder of the grassroots animal rights organization Direct Action Everywhere (DxE), undertakes what is known as Open Rescue. This involves trespassing onto modern day “farms” and slaughterhouses, rescuing animals deemed sick and suffering and broadcasting the entire saga to the world while revealing everyone’s identities. When you do that often, you may end up in court, which is what happened to Hsiung in 2021. He received a suspended sentence for having rescued a baby goat from a farm in 2018.

UnchainedTV’s Jane Velez-Mitchell interviewed Hsiung about the North Carolina case, and the upcoming trial in Utah. He has been fighting in court hoping to present evidence showing that what he does is morally justifiable — and perhaps legally justifiable too. You can watch the entire conversation here:

Hsiung’ parents emigrated from Taiwan in the 1970s and he grew up in Indiana. He explains how this caused his animal rights vocation:

“I’ve suffered from enormous dislocation my entire life. My family was an immigrant family. They moved to Central Indiana where there’s not a Chinese person in sight.

“I didn’t have any friends. And my dog was my best friend. She was really there for me… They love you so much and it’s so unconditional. It’s so open and trusting and completely lacking any sort of artifice or manipulation.

“No matter how hard school was, no matter how many people made fun of me, called me fat or stupid, or a (expletive deleted), I knew my dog would be there for me. So, yeah, I got to be there for them. It’s a deeply personal thing for me.”

After having investigated several slaughterhouses around Chicago, in 2013 he and others founded DxE in the San Francisco Bay Area. As part of this organization, he participated in many open rescues. One in North Carolina, though, led him to face criminal charges in court.

One night in February, 2018, Hsiung sneaked into a small scale North Carolina farm. He here is how he tells the story:

“We had, on two occasions, found very sick baby animals at a fairly small-scale commercial animal farm. And there have been many reports of animal cruelty to the authorities in Western North Carolina by an animal rescue group that I know very well.”

“Both times we went, we found very sick and distressed animals. So, the first time we went, we found a baby goat who’s collapsed on the ground. There was a pile of feces right next to him, which is unusual…he was covered with lice and had a big distended belly.”

“We took him to the animal shelter. He got the care he deserved, and he survived because of that. And the second time we did this, we decided, given there had been no response, we needed to create more attention and publicity around this. So, we live-streamed the entire experience. We went in not knowing what we would find, and we found a baby goat with pneumonia. We took him out. A couple of months later, I came back to Asheville, North Carolina, to speak at a vegan fest. I got pulled off an airplane, arrested, and charged with two felonies. Just a couple of months ago, I was convicted of those two felonies I think, in no small part, because the judge gagged us from speaking about the animal cruelty we saw at the farm.”

The farm owner claims the goat was not sick when removed. The owner is invited on any time, as is any individual or corporation connected to this story.

The Strategy Behind Open Rescue

One of the main reasons Hsiung chose Open Rescue was to show the world what happens in animal farms. But, says Hsiung, the animal agriculture industry doesn’t want the public to know. The public might assume that that when a case goes to court, the most compelling evidence will become public. It’s not that simple.

“We were able to play the livestream, which is a pretty dramatic moment…the problem with that live stream is, first of all, this is a Facebook Livestream early in Facebook’s days of live streaming. So, the quality is very low. Secondly, this is all shot at night using kind of a simple iPhone camera. So, it’s really hard to tell what’s going on.”

“People were not able to see what we saw in terms of the conditions of the animals. But more importantly, there was other photographic, video-graphic and documentary evidence. And the jury wasn’t allowed to see it because the judge, on day one, with almost no argument at all, just decided he was going to gag any evidence relating to the condition of the goats.”

“It’s not just the court of law but the court of public opinion that matters.” –Wayne Hsiung, Animal Rights Activist co-founder of DxE

Another Case, Another Gagging Attempt

Hsiung is in court again in another case advocating for the Right to Rescue. This one was about the Open Rescue of two pigs from a Utah farm in 2017. He planned to use more sophisticated technology to show what happened. However, prosecutors wanted to prevent the jury from seeing Hsiung’s evidence. This is what Hsiung said before the crucial hearing where this issue was going to be argued:

“We went in with this prototype VR camera that a tech startup in the Bay Area lent us. We shot it in 360 degrees. So, we could see everything because one of the things factory farmers always say, when we get a shot of some cruelties, is that it’s a very narrow segment of the entire farm.”

“The most important hearing in the entire trial… is occurring potentially months before trial. The state, the prosecution, has moved with the court to have ALL evidence of inhumane animal conditions, even someone saying something about the inhumane animal conditions, gagged from the courtroom. They’re going to be arguments about whether that evidence can be presented in court…it’s going to be a devastating motion to lose because it’s trampling on my basic constitutional rights. When you’re a criminal defendant, you have a right to present a defense.”

“My hope is the judge does the right thing and allows us to tell the complete story of what unfolded in Utah.”- Wayne Hsiung, Animal Rights Activist co-founder of DxE

On Thursday February 24th, 2022 the judge in this case shattered Hsiung’s hopes and ruled against him. Hsiung gave a written update to his supporters: “I just had a hearing in my felony case for investigating the largest pig farm in the nation, Smithfield’s Circle Four Farms, and rescuing two sick piglets. The judge in our case took a major step to side with Smithfield today by granting the prosecution’s motion to exclude evidence of inhumane animal treatment in the trial.”

What Motivates an Animal Rights Activist?

“I think there is something really powerful about sacrificing and showing your solidarity with animals.  In so many activist circles, and just political circles more generally, we’re always looking to find influence and network among the most powerful. Let’s go find the celebrities, the rich, the influential. And, I found, both of animals and human beings, that sometimes the most important insights come from being around the most vulnerable.”

“I don’t think I will ever fully understand what’s like to live on a factory farm. To be a mother pig in a gestation crate or a chicken in a factory farm, or a battery cage. But, I do know that the brief experiences I’ve had in jail have been pretty transformative for me. And understanding just a tiny bit what it’s like to be an animal, human or non-human, who’s living in a cage. My hope was that, if I go through that experience, there’s some redemptive quality to it.”

“I learned something from that experience, and I can relate to the animals more deeply. It just motivates me even more to get all animals out of cages.” – Wayne Hsiung, Animal Rights Activist co-founder of DxE