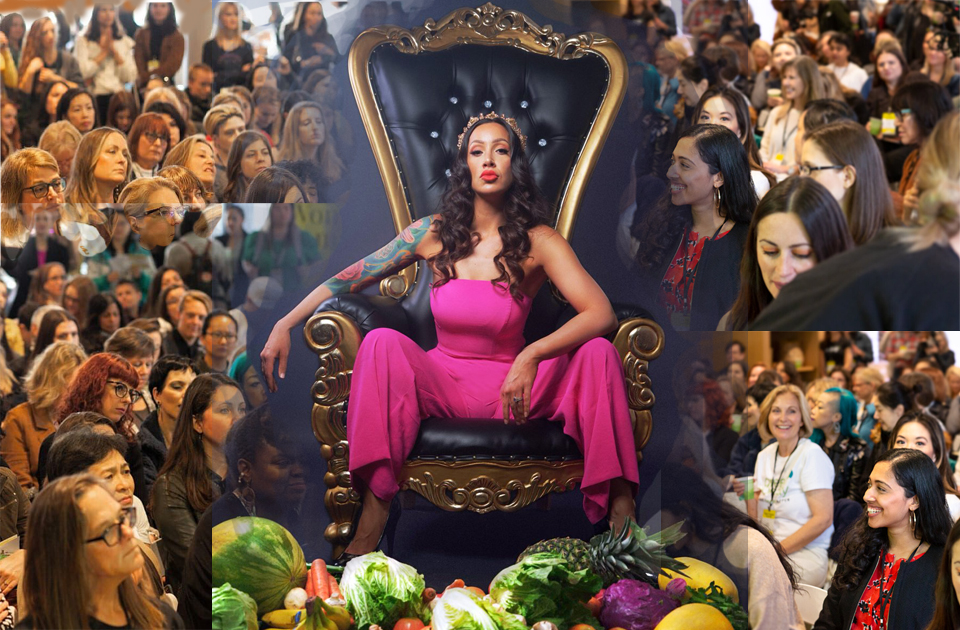 Jennifer Stojkovic, the founder of the Vegan Women Summit, has authored a new book about the role of women in the plant-based revolution.

More than 800 high-powered vegan businesswomen converged on downtown Los Angeles for a rip-roaring daylong summit on April 8th, 2022. Sprinkled with movie stars, corporate founders, tech executives and hedge funders, the Vegan Women Summit was buzzing with intense conversations and a series of dynamic panels featuring women who have made it in the vegan space. Some have been featured on Shark Tank. Others own companies that might soon go public. All of them were super pumped to be there. Indeed, more would have come. But, the event was sold out!

These yearly summits have been growing in size and prestige for a few years now.  Summit founder Jennifer Stojkovic (in yellow, above) is a dynamo who combines the energy and charisma of a stage performer with the tech know-how of a Silicon Valley programmer.

In addition to organizing the event, this Canadian multitasker has just published a groundbreaking new book titled, “The Future of Food is Female: Reinventing the Food System to Save the Planet.” This must-read book offers a roadmap to reforming our food system, and shows how women are leading the charge. With in-depth interviews, the book features the never-before-told stories of fifteen female CEOs, venture capitalists, scientists, and trailblazers, across continents and backgrounds, who are reinventing our food system to save the planet.

UnchainedTV’s Jane Velez-Mitchell spoke with Stojkovic after the Summit concluded. You can watch the hour talk here.

Jennifer Stojkovic has a very unusual journey to veganism, which she explained in her book, and in her conversation with Jane:

“When I was in my early twenties, my husband and I were newlyweds, and our best man was murdered in a tragic gun violence episode. It completely shocked and turned our world upside down. We were very young at the time. A traumatic death is a very difficult thing for anybody to grapple with.

“I was coming to terms with that grief… we had to go through a murder trial and all that comes with what happens when somebody is murdered. We decided to forgive the murderer. My husband and I went to the jail and forgave the murderer in person. We decided that if we were going to find our way out of this grief, we would need to find compassion. So, we started with compassion for the murderer. Then, we looked at ourselves and said, ‘okay, so we can find compassion for this person, why are we not acting with compassion in every other way in our life?’ So, the most obvious way that you can remove yourself from pain and suffering is what you do three times a day. That is quite simply how we came upon going vegan. It was really an act of compassion for both our hearts and a form of cathartic relief for us going through that situation. But, also, it was like an act of compassion for the world and the animals that live on it.”

In 2018, Stojkovic launched a Future of Food series of partnerships, bringing together CEOs and founders from leading tech brands. Then, inspired by what she learned, she founded the Vegan Women Summit™ in early 2020. She explains why the event is unique.

“It is the only space in the entire world, the only conference, that’s focused on elevating women in the future of food, fashion, beauty, and animal-free technology. Our goal is really to show the nearly 4 billion women on the planet that they can be a part of building a kinder, more sustainable world. We want to inspire, educate, and empower them to bring compassion to their careers in any way possible, whether it’s through creating a company or joining a food tech company, or becoming an advocate in their own industry. That’s why we bring together actresses, celebrities,  venture capitalists, founders, and executives…. particularly women of color, as 60% of our community are women of color — about 75% of our speakers were women of color.”

Stojkovic explains what will happen next year.

“We also produce our pitch competition. So, stay tuned if you’re a founder that wants to pitch with us at VWS Pathfinder. We’re going to be hosting that again in the fall. We’ve had over a thousand women founders apply from 31 countries since launching. We, of course, will be bringing back the big in-person flight trip summit in 2023. Stay tuned. We are moving out of Los Angeles. So, it’s a secret surprise where we’re going to be going next, but it will be even bigger.”

A Harmless Alternative to Breastmilk

One of the most interesting women-driven innovations Stojkovic mentions in her book is an alternative to breastmilk that doesn’t come from non-human animals, but from humans:

“I talk about Biomilk, which is a startup that I’m extremely passionate about. It’s a completely woman-led team. The CEO is Michelle Edgar. She has created something so important for the planet and this country. Biomilk is a breastmilk alternative. The very first cell-based breast milk.

“The same technology that can theoretically create “lab meat” can also create breast milk. The reason why it’s so important for us to have cell-based breast milk is that most babies in this country, particularly babies that are of the Global Majority, are not breastfed. And we’re not going to be able to change that anytime soon because we are the only developed nation in the entire world that does not have paid maternity leave or parental leave. So, women just have to go back to work. These babies are not getting breast milk, and they are often failing to meet the benchmarks that they need to meet. With Biomilk, she is creating a product that will be an alternative to breast milk. You don’t have to have dairy infant formula anymore. Dairy infant formula is absolute garbage. It’s a horrible product. It hasn’t been disrupted in sixty or seventy years. It’s also about 10% of the global liquid dairy market. So, it has a tremendous impact on animals and the planet, and we don’t talk about it at all.”

“90% of black babies that are born in America are lactose intolerant yet almost all black babies are put on dairy infant formula from six months and onward.” – Jennifer Stojkovic, author and founder

Jennifer Stojkovic started her business life in tech in the Silicon Valley and told Velez-Mitchell that she’s seen a huge change in how this crucial sector views veganism.

“I am from a small town in Canada. I’ve been in the US for the last 10 years or so. I spent the first half of my career in Silicon Valley in the tech industry. I’ve really focused on how I can become a leader in the food space as well. And I have personally been vegan for 7 years and that has really changed a lot over these last few years. I used to spend all of my spare time pushing this space and now I spend my entire day doing it.

“The tech industry is grappling with a lot right now when it comes to what people expect from leaders. A really big shift has happened in these last few years, kind of popping the bubble of those post-2008 companies. People are starting to expect you to be a socially impactful company. I do think it’s becoming an expectation to be a little bit more about your purpose and mission.

“We are starting to see more and more companies both tech and non-tech, caring about sustainability. Most major companies have sustainability, but they don’t always have plant-based on the menu.” – Jennifer Stojkovic, author and founder

Stojkovic says veganism still has what she calls “a branding problem.” She is taking on the challenge of branding the emerging plant-based food system in a way that makes it more attractive to both businesses and consumers. At the summit, lots of women were using terms like “food tech” and “alternative protein.” The messaging is intentional, signaling that the future of food, along with being female, is also vegan.