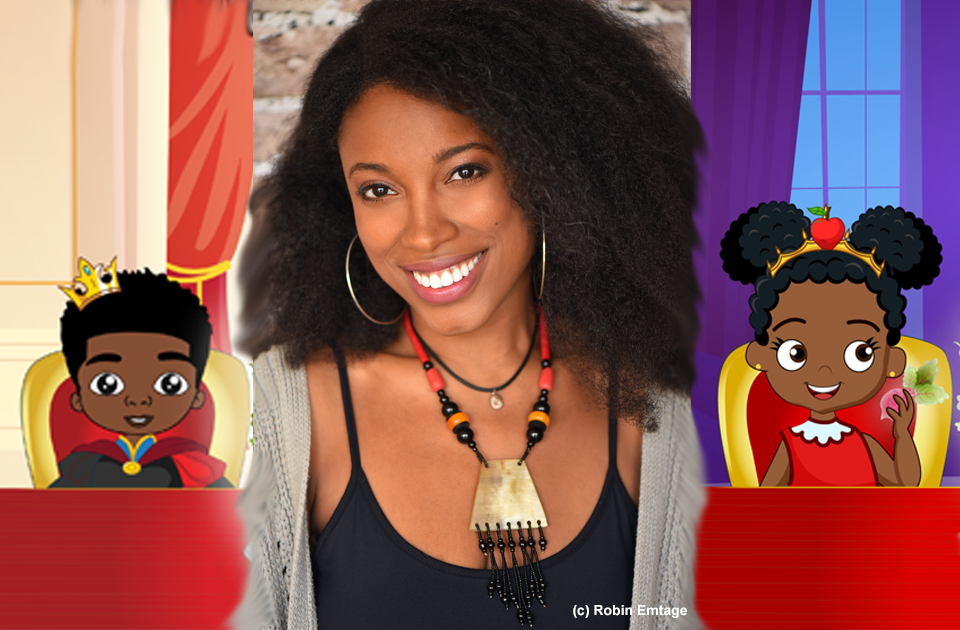 TV producer, filmmaker, and actress Jasmine Leyva has now authored two magical children’s books to help parents and teachers channel the inner vegan in children so they can grow up healthy and companionate.  These books are inspiring kids to crave and seek out healthy fruits, veggies, nuts, grains and legumes. With enchanting cartoon illustrations, the books are a fun read for kids while also subtly packed with lifesaving lessons. “These two books need to be in every school in America and the world,” says journalist, author and UnchainedTV founder Jane Velez-Mitchell. Both books are available on Amazon.

Velez-Mitchell had an extended conversation with Leyva that you can watch here:

Jasmine Leyva is experienced in communicating through storytelling. She is a filmmaker, actress, and now author, based in Los Angeles. She holds a Bachelor of Arts in TV, Film, and Media and a Masters of Fine Arts in Screenwriting. Leyva worked as an associate producer on the NAACP award-winning docu-series Unsung, and was subsequently a writer and producer for Being, a docu-series highlighting dynamic entertainers in film and music. Leyva was also an associate producer for a variety of unscripted television, and is a producer on America’s Got Talent.

In front of the camera, Leyva starred in the Lifetime show My Crazy Ex, along with other TV projects. In 2019, Jasmine and Kenny Leyva released their own feature-length documentary, The Invisible Vegan (available to watch free on UnchainedTV). The film chronicles Jasmine’s personal experience with plant-based eating. It also explains how plant-based eating is directly linked to African roots and how African-American eating habits have been debased by a chain of oppression, stemming from slavery, economic inequality, and modern agribusiness. She currently teaches media writing at California State University.

“When I tried veganism, I tried it for cosmetic reasons. ‘Look at this chick, she looks great vegan, let me try.’ But when I did it, a lot of the health ailments I was suffering from ended up naturally going away. This is a matter of life or death. Even at one point, I remember I had cancerous-like cells growing on my cervix. And the doctors were ‘oh, well, we’re going to burn off a piece of your cervix.’  I said….NO. Then I went on a fast. I started to eat only fruits and vegetables. After a few months I went back. All the (cancerous-like) cells were gone.”

Inspirational Books for Children: Just What We Need

Leyva’s books teach children how to live a healthy lifestyle — a plant-based lifestyle. They also promote the importance of getting enough sleep, drinking enough water and staying away from negativity. Leyva explains why she wrote them.

“My film – ‘The Invisible Vegan’ – was geared towards adults. Adults can be receptive, but a lot of times, adults are all set in their ways. So, I thought, okay, I also want to do something for kids, just planting seeds with the kids and not forcing anything on them. It’s just like letting them know, ‘hey, vegetables are good for you.’ And then, presenting the information telling them why.”

And it seems the books work, as the results from the ground show they are having a positive effect.

“We tell kids to eat vegetables, but we don’t think that they are competent or mature enough to be able to digest why they should be doing this. So, this book kind of goes against that. Eat carrots because it’s great for your eyes. Eat broccoli because it’ll help you get nice and strong. Eat celery because it can help settle your stomach.”

Leyva says her books are ideal for kids who have been resisting vegetables. She’s seen remarkable turnarounds.

“My friends who have kids say that their kids are now asking for vegetables after reading the book. ‘oh mommy, I want to have great eyes. Can you get me some carrots?’”

Leyva points out that the clock is ticking for millions of kids trapped in a fast food world, kids who are developing lifestyle diseases at an early age.

“The food that the kids are eating now is way worse than the foods we were eating 20, 30 or 40 years ago. So, you’re starting to see all of these degenerative diseases come in sooner.”– Jasmine Leyva, author

Two Books to Inspire Every Kid

The two books will be especially useful for communities of color, where they may be most needed. One book has a girl protagonist while the other book’s lead character is a boy. The first one is ‘Queen Vegana and Princess Apple: The Magical Worlds of Vegetables.’ Leyva explains what the story is about.

“The Little Princess Apple, she gets her vegetables. She doesn’t like them that much. So, she always throws them out of the castle. She’s like, ‘mommy, I feel bad, but I just don’t like vegetables. I don’t like the way they taste.’ And then, her mom just starts going through all the vegetables telling her why they’re so magical: ‘Look, broccoli is good for your bones; carrots give you better eyes.’ By the end of the story, Princess Apple says ‘I want to be strong just like you mommy.’ So, she starts eating her vegetables.”

The second book is ‘King Vegus and Prince Parsley: Creating a Healthy Kingdom.’

“This is kind of a similar concept. King Vegus, and everyone in his kingdom, live to be 100 years old. So, the Prince is scared that he’s not going to be able to help everyone live that long, and his dad told him ‘I’m going to give you ten secrets to help people live forever.’  Things like make sure you drink your water; make sure you eat all your vegetables; make sure you keep your temple clean. So, it’s just really implanting those paramount ideas into kids when they’re young.”

Leyva says she wishes she had a book like this when she was a kid.

“I thought that diabetes, high cholesterol, high sugar, was my destiny. So, when I was shown another way of eating food that healed me, I thought ‘I going to move this way.’”– Jasmine Leyva, author

New Documentary in the Pipeline

Leyva already has another creative project in the words to inspire both kids and adults toward the plant-based lifestyle. She is making a new documentary.

“I’m working on a documentary called ‘The Invisible Shame’ because I did a documentary called ‘The Invisible Vegan’ which advocates for a certain diet. I think it’s also important to understand the reasons why people eat what they eat… fast food, junk food, or comfort food. Sometimes, it’s economic reasons. But then, other times, it’s also stress or anxiety going on in their own lives, and they’re using this food in order to cope with their existence. And, even the parents of these children who are giving them fast food, they’re trying to make it through the day.”

Like her first documentary, the second one draws heavily on her own experience.

“My new documentary came from when I was going through a really stressful time in college. I was binge eating and I was taking laxatives because it would get so painful that I would take laxatives to get the food out. I didn’t register it as an eating disorder because it wasn’t something that I was doing to be skinny. It was like my appetite picked up. But, I didn’t understand that there’s a psychological relationship between our eating habits and our emotions. I think a lot of people also don’t know about that relationship. So, when you know better, you do better.”  Jasmine Leyva, author