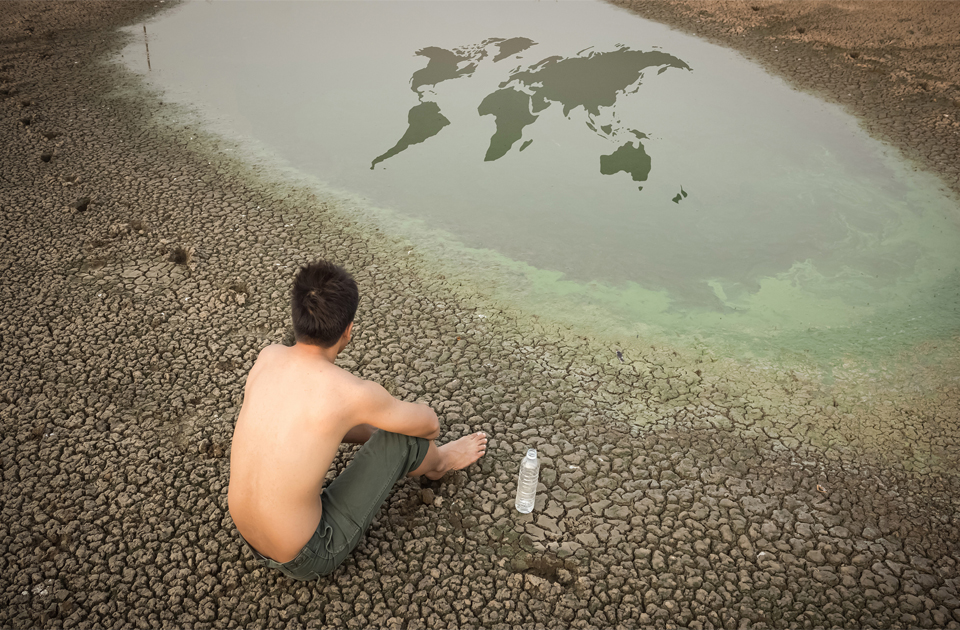 The current global water crisis has been ignored by both the mainstream media and governments.

It only takes five days. Five days without water, and the average person will die. After oxygen, water is the most precious substance for human survival…. at the individual level, and at a global level. And yet, unless you live in California, and you have been told that you should ration how much water you use, most Americans take water for granted. Most people are unaware of the global water crisis.

We tend to see droughts as unfortunate temporary rarities that will go away as quickly as they appeared, but that is not always the case. It may be that, in some places, droughts become permanent. We’re not just talking about the Sahara or the Arizona desert. We’re talking about regions where the inhabitants have no clue that this is a potential threat. Perhaps you live in one of them. And, with the climate crisis, things may get a lot worse on Earth, the little blue planet of our solar system characterized by its abundance of water.

Who is responsible for this water crisis?

Animal agriculture is certainly at the top of the list.  Fast Company reports that, “The USGS estimates that it takes 4,000 to 18,000 gallons of water to produce a juicy hamburger, depending on conditions that cows are raised in. The water doesn’t go directly into your burger; rather, it is used to feed, hydrate, and service cows.”

Will Water Scarcity Take Us to the Vegan Tipping Point?

California has almost two million milk cows, who are consuming — and polluting — so much water that it is shocking that virtually nobody in power talks about it, even though the state is in the throes of a drought crisis. But, Thomas Schumann, a sustainability pioneer, talks about water all the time. He is an expert on how water has been mismanaged around the world, and has a lot to say about how to solve the water crisis. UnchainedTV‘s Jane Velez-Mitchell interviewed Schumann who offered some frightening scenarios of what may lie ahead if we fail to act. You can watch the entire conversation here:

Aridification: A Term We All Should Learn in School

A single word describes the water crisis we are experiencing: Aridification. It is the gradual change of a region from a wetter to a drier climate. It refers to long term change, rather than seasonal variation. Schumann explains:

“We’re not facing drought. We’re facing aridification, which is the permanent state of drought. This is the new normal. We have to wake up and understand that this is not just another drought and it’s going to go away when El Niño comes, and we have heavy rains. This is aridification and we urgently need to adapt to achieve climate and water resilience.”

Who or what is causing this? Schumann says one culprit is global warming from human-caused emissions of greenhouse gases such as CO2 and methane. Another culprit is the overuse and pollution of water by heavy water-dependent industries. In both cases, animal agriculture is an underlying cause and the worst offender. Says Schumann,

A 2014 study found that reducing animal products in the human diet offers the potential to save water resources, up to the amount currently required to feed 1.8 billion additional people globally. Plant-based advocates say, to solve the problem once and for all, we should reduce animal agriculture by 100%, and replace it with plant-based agriculture while moving towards regenerative veganic agriculture.

The Man Who Knows About the Water Crisis

Thomas Schumann is a sustainability pioneer, innovator and steward at the Council for Inclusive Capitalism. Born in Frankfurt am Main, Germany’s financial capital, he became inspired when – in 2015 – the city became the world’s most sustainable city, according to the Sustainable Cities Index. Having learned about social, environmental, and financial responsibility, he founded Thomas Schumann Capital LLC, to invest in global water security. He is also a nationally-ranked endurance athlete embracing a lifestyle of health and sustainability.

This is how Schumann describes his business: “My business is, first and foremost, to advance my mission of global water security… to educate, inform, alert, inspire, activate, and encourage.”

Regarding public equity, this is what he does: “I’ve developed the world’s first index family for water security. Basically, we have a global version, a U.S. version, and a Euro version. You look at listed companies to see how they manage their water. The investment thesis is, ‘If you’re investing in companies who are good water stewards, this will benefit you in the future.’”

Regarding private equity, he offers the following: “Certain companies we’re working with have very innovative water technologies — such as atmospheric water generation — for water supply. Then, there’s also a big project we’re working on in Greenland. Greenland has the world’s largest freshwater sources and they’re melting on a daily basis into the oceans. They need to be captured, stored, transferred, and distributed to areas where there’s water scarcity.”

At the rate we are mismanaging our global water resources, some wonder if water will become the new gold.

“Water was named a human right by the United Nations, but it needs a price because there’s a heavy cost involved to make it drinkable and accessible.” – Thomas Schumann, sustainability pioneer

In addition to global effects on the climate and the planet, some people in several zones of the world are already suffering the direct effects of aridification. California is going that way. In 2015, NASA satellite imagery showed California’s Central Valley Aquifer being drained to irrigate farm fields, which contributed to two-thirds of California’s water losses. The global numbers are staggering.

“Currently, we’re heading towards three billion people living in water scarce regions in the world. By 2040, 20%, 40% or even 50% of the world’s population could live in water-scarce areas,” warns Schumann.

Media Silence on This Crucial Issue

Why is the mainstream media not talking about the water crisis?   Critics say it stems from a reluctance to confront the animal agriculture industry,  which – in the form of meat/dairy/fast food commercials – comprises the primary news media advertisers. But, now, water is becoming too big of a climate issue to ignore.

“Climate primarily expresses itself through water. And that’s in the forms of drought, wildfire risk, sea-level rise, heavy precipitation, changes in biodiversity, water scarcity, and water stress. And now, we have that playing out as a global food insecurity catastrophe.”  Thomas Schumann, sustainability pioneer

The unique thing about water is this. It’s not how much you have. What matters is: what kind of water you have.

“Water is always local, and it shifts its form. Water is the only resource and only element that exists in three forms, which are liquid, gas and solid. It really doesn’t become more or less. It just shifts its form, and where it’s appearing.”

“We need to implement water footprints as soon as possible. A suggestion would be, as you have ingredients and fast-moving consumer goods, we need to assess a water footprint and attach that to these products we consume on a daily basis. It all starts with education, with awareness, with consciousness, and information.”

It all boils down to a famous line from Coleridge’s poem, The Rime of the Ancient Mariner. “Water, water everywhere and not a drop to drink.” Obviously, nobody wants a world like that.