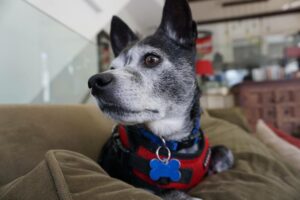 Can dogs thrive on a plant-based diet? Many vegans feeding their companion dogs vegan food think so, as their dogs are healthy. But now, science not only has confirmed it, but it has gone a step further suggesting that a complete balanced plant-based diet may be better for dogs than the alternatives.

A new peer-review study published in 2022 has concluded that nutritionally complete vegan diets for dogs may be linked with better health than meat-based diets. An international team of researchers analyzed data from 2,536 dogs fed either conventional meat, raw meat, or a vegan diet. The survey asked guardians about the dogs’ health, including the number of veterinary visits, use of medications, and specific dog health disorders. They found that, overall, dogs on conventional diets were less healthy than dogs on raw meat or vegan diets.

These researchers, led by Professor Andrew Knight, a professor at the University of Winchester, UK, found that the percentage of dogs reported to have suffered from health disorders was 49% for the conventional diet, 43% for the raw meat diet, and 36% for the vegan diet. Prior research has linked raw meat diets to increased risk of pathogens and nutritional deficiencies, so the researchers concluded that a nutritionally sound vegan diet may be the healthiest. A different 2021 study about food palatability involving 1,370 dogs concluded that dogs found vegan dog food just as tasty as conventional meat-based dog food.

How is this possible? Weren’t dogs obligatory carnivorous? No, they are not. They are omnivorous — which means they can eat many things. Although they descend from one type of carnivorous wolves who lived about 30,000 years ago, dogs have evolved separately from them by abandoning predation. Dogs joined human colonies about 15,000 years ago and gradually changed their dietary adaptations from carnivores to omnivores. They needed to be able to digest properly all the food they got from humans, including plant-based food, as this is what humans ate more (research from Cordain et al. showed that at least 65% of the diet of pre-agricultural Paleolithic humans was plant-based). Because of this shift towards plants, dogs can now digest carbohydrates easier than modern wolves can.

But what is nutritionally complete dog food? Professor Knight explains it: “Although special attention must be paid to ensure adequate levels of certain nutrients such as proteins, amino acids (e.g., taurine, carnitine, methionine, lysine, and tryptophan), vitamins (e.g., Vitamins A, B3, B9, and B12), minerals (e.g., calcium, iron, zinc, and copper), and certain fats, it is important to remember that dogs, cats — and indeed all species — require specific nutrients, rather than specific ingredients. There is — at least in theory — no reason why diets comprised entirely of plants, minerals, and synthetically-based ingredients (i.e., vegan diets) cannot meet the necessary palatability, bioavailability, and nutritional requirements of cats and dogs.”

People are feeding many animals to their dogs, contributing to a lot of suffering and the current climate crisis. But it doesn’t need to be this way. Now science has shown us that the vegan way is the better way. It is estimated that one 70-pound dog on a plant-based diet could save every day an equivalent of 2,200 gallons of water, about 60 square feet of forest, about 90 lbs. of grain, and the lives of two farm animals.

Vegan dog food is a win-win for everyone.

LET THE VEGAN DOGS OUT!  American dogs would reportedly be the world’s 9th largest meat-eating…

3 Reasons for Your Dog to Go Vegan

I’m a huge fan of Wild Earth. You may remember seeing the vegan dog food…

Make Your Own Vegan Dog Food at Home!

It’s all about vegan dogs! And they can eat a lot of the foods we…