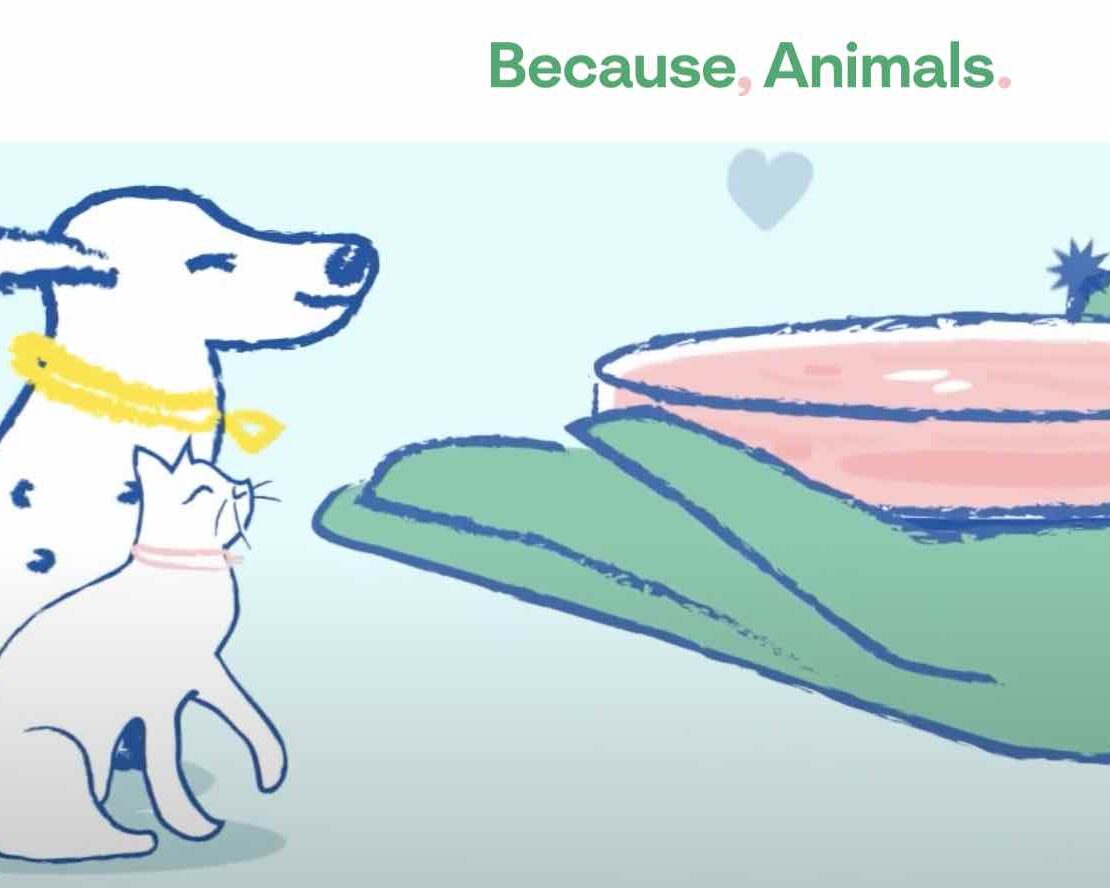 Cultured Meat for Pet Food Could Save Billions of Animals’ Lives

A hi-tech pet food company is about to launch a lab-based mice treat for cats!  The mice are alive and well,  by the way. Read on to learn how and why.

Cultured meat may not be technically vegan. But, the budding technology does have the potential to massively reduce animal suffering. If all the dogs and cats in America were classed as a country, a new study estimates that country would be the fifth-biggest meat-eating nation!

That’s how game-changing cell-based pet food is.  And, dogs are not even strict carnivores. They are natural omnivores, opportunistic eaters. A growing body of evidence suggests they are capable of living healthy lives on a plant-based diet. Indeed, there are a growing number of plant-based dog food brands. Wild Earth vegan pet food gained national fame after being featured on Shark Tank, where Mark Cuban announced he was jumping in as an investor! Bramble, a vegan dog food delivery service,  is profiled here.

But, most Americans who have dogs and cats still insist on feeding their companion animals… other animals. Many veterinarians also push a meat-based diet. And, of course, the traditional dog food brands campaign heavily to condition people to feed their dogs and cats meat, to ensure their own profit.

Because, Animals: “Because, Animals is a small company with a big mission: To make the most sustainable and nutritious food for dogs and cats on the planet — without ever harming any animals or the environment.”

The company is producing nutritionally complete vegan dog food. But for those who do not wish to feed their dogs a plant-based diet, they are developing a cultured meat product.

What Exactly Is Cultured Meat?

“We are also the only pet company making cultured meat for your cats and dogs! Cultured meat is identical to traditional meat. It’s 100 percent meat! The only difference is our animal cells grow inside a vat (like beer!) instead of inside an animal.” Shannon Falconer, Ph.D., Because, Animals CEO.

Because, Animals has produced a video to answer the question “what is cured meat?”

The company states that they grow the clean meat from “humanely harvested animal cells.” They then feed those cells “a mixture of proteins, vitamins, minerals, and other nutrients.”  In the case of the lab-grown cat treat product, the animals used are mice.

Rescued From A Lab

Shannon points out that much commercial pet food for cats are of bovine or poultry origin. These are also a cat’s main allergens. Cats in the wild have evolved to eat mice, small birds, and insects. So, from an evolutionary perspective, she believes cultured meat, based around mice, is a more natural diet for cats.

Shannon points out the mice used in harvesting these cells were rescued from a research lab and are now living comfortably and safely. These mice are currently two years old, which is a good age for mice.

Because, Animals is looking at a very limited batch release of cultured cat meat in 2022. The nutritionally complete food will become available sometime after that.

It’s Not Vegan… But…

Some vegans may find this controversial. But, lab meat is undeniably creating pet food that doesn’t involve slaughtering animals. It has the potential to massively reduce animal suffering and death. And, the technology is attracting big investors.

Orkla, a European food conglomerate, just announced it is investing in Because, Animals. They’ve done this in a bid to take the lead in alternative proteins.

“As a company deeply committed to health and sustainability, we see cultured meat as having interesting potential in terms of sustainability, animal welfare, and food safety. Because, Animals’ products and technology stand out as a sustainable, healthy, humane way to feed pets. Their progress in developing cell lines, growth media, and driving down cost is impressive – all vital steps in bringing cultured meat technology to market.”

Because, Animals is Orkla’s first-ever investment in pet food, and the first move by its recently announced Orkla Alternative Proteins division, an umbrella for emerging food technology brands.

Shannon explains why the investment is such good news:

“Partnering with a major international food player like Orkla is exactly what we sought to do from the beginning. “We were not interested in just any corporate food heavyweight. We needed them to be firm believers in sustainability and the future of food, and we’ve found exactly that combination in Orkla.”

Shannon and Joshua Errett, MBA, co-founded Because, Animals. Joshua and Shannon both volunteered at the same cat rescue charity. In 2019, the company announced success in creating the world’s first cultured meat pet food made from cultured mouse tissue, the ancestral diet of the cat.

Proponents of cultured meat say it is safe and healthy for pets without any of the negative impacts associated with factory-farmed meat. In the United States, more than a quarter of the environmental impacts from the animal agriculture industry are directly attributable to meat consumption by pets. In addition to reducing environmental harm, cultured meat requires no animals to be raised inhumanely for slaughter. Cultured meat proponents say the “clean meat” poses no risk to pets and public health through bacterial contamination, antibiotic resistance, or zoonotic diseases, such as COVID-19.

Shannon says Because Animals aims to compete price-wise with the animal-based meat products in the pet food market.

She points out that they have “no interest in being a niche company” and want their products to be as affordable as possible.

New York Pet Stores Will No Longer Sell Dogs, Cats, or Rabbits as of 2024